Payments of 14 top firms in Mumbai for the three months to Sep show a 19.2% increase from a year earlier

Mumbai: Advance tax payments of 14 top companies registered in Mumbai for the three months ending 30 September showed a 19.2% increase from a year earlier, signalling a revival in corporate earnings.

The tax department is expecting a 15% increase in such payments when the top 100 companies pay in the next two days, officials said.

The current year’s tax target for the Mumbai circle is ₹ 2.3 trillion, an income-tax official said on condition of anonymity. In the fiscal second quarter, the advance tax numbers have been positive, he said, adding, “We are a little less than the growth target of 17%."

The official, however, declined to give the actual growth of these 100 companies that file their advance tax in Mumbai from a year ago.

State Bank of India (SBI) is likely to have paid ₹ 1,390 crore for the September quarter as advance tax against ₹ 1,120 crore for the corresponding period of last year, an increase of 24%, tax officials said.

SBI, the nation’s largest lender, has traditionally been the highest taxpayer in the Mumbai area, followed by Reliance Industries Ltd.

State-run Shipping Corp. of India Ltd and Tata Motors Ltd have not paid advance tax for the September quarter.

Income-tax law requires companies to pay 15% of their total advance tax in the fiscal first quarter, followed by 30%, 30% and 25%, respectively, in the next three quarters. Mumbai accounts for over 33% of the total direct tax collections in the country.

Positive advance tax collection numbers are coming at a time when gross domestic product (GDP), the broadest measure of goods and services produced across the economy, grew 5.7% in the three months ended 30 June, the fastest pace in two-and-a-half years. 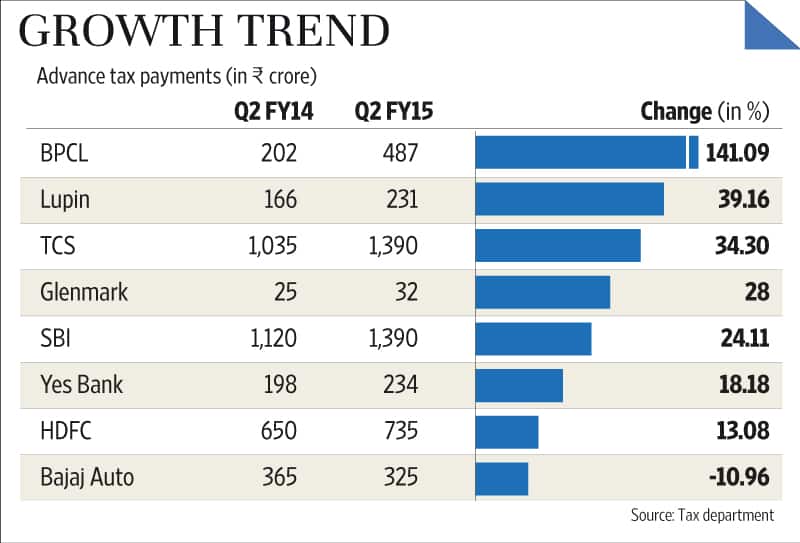 Indian companies pay income tax every quarter on their projected earnings and these figures are used as a proxy for financial performance estimates, though the correlation of earnings with the tax paid has been mixed.

Earlier in July, finance minister Arun Jaitley said the revenue targets fixed for direct taxes for the current fiscal will not only be achieved but will also be surpassed.

In the last three fiscal years, direct tax collection of the government have been increasing with annual growth rates of 10.8%, 13.1% and 14.3%.