Mumbai: Under pressure to reduce their carbon footprint and offer cheaper modes of transport, around a dozen auto makers will showcase new or currently available electric vehicles, or EVs, at the week-long Auto Expo that begins in New Delhi on 5 January.

Even though the cost of running an EV is about a third that of a petrol-driven vehicle, with zero emissions to boot, manufacturers have been facing a rough ride. 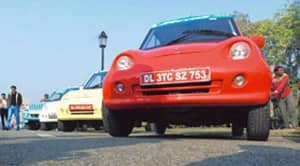 “The incentives" for buyers and manufacturers of EVs in India “have been few and far between", said Sohinder Gill, president of the Electric Vehicles Manufacturers Association (EVMA), the lobby group for EV manufacturers.

Until now, the sector has been synonymous with the Bangalore-based Reva Electric Car Co., which was the first to enter the market.

Hyundai will unveil the electric version of its compact car model i10, while Tata Motors will display its electric Indica hatchback at the Auto Expo.

Maruti’s efforts will, for now, be limited to demo vehicles that are going to be used during the Commonwealth Games this year, said I.V. Rao, managing executive (engineering) at Maruti.

“We are still learning the technology," he said, adding that the company was yet to initiate a market study. “The (commercial) production of such vehicles will happen much later."

Electric two-wheelers from existing manufacturers such as Hero Electric Ltd, Electrotherm India Ltd as well as some fresh entrants will also be on display.

An electric motor replaces the gasoline engine in EVs. The motor draws power from a controller, which in turn derives energy from an array of rechargeable batteries.

These need to be plugged in at charging stations after the vehicle has covered 80-120km, depending on the kind of battery.

Typically, the cost of running an electric car or two-wheeler is 40p per kilometre, or a third of the cost of petrol-powered vehicles. That quickly makes up for the extra Rs1 lakh or so that buyers have to shell out for electric cars over petrol-run cars, or the Rs8,000- 10,000 more for electric two-wheelers over their conventional counterparts.

But Gill said this won’t be enough to power the sector’s commercial growth. The association he heads had initially projected the sale of 110,000 EVs by the end of 2009-10, but has scaled down its estimate to below 100,000.

Unlike developed markets such as Spain and France, which include charging points in town planning, India simply does not have adequate infrastructure to encourage buyers to opt for EVs, he said.

India’s power deficiency also weighs down on the usage of electric cars. According to the Central Electricity Authority’s November figures, India generated 155,868 MW of power, 13-14% less than the requirement.

Industry will have a higher priority in power-hungry India, said Sharad Verma, partner and director of Boston Consulting Group (BCG), the global consulting firm which has come out with a study entitled The Comeback of the Electric Car?

Moreover, an “inverted duty structure", which levies less duty on imported vehicles than on parts, has discouraged auto makers from manufacturing EVs in India and rely mostly on imports, said Verma in an email interview.

Another concern is the high cost of the battery, which constitutes a third of the purchase price of an EV, said Gill.

In India, most EVs are powered by lead acid batteries, which offer a driving range of around 80km on a single charge, and are inferior to lithium ion batteries, which allow a car to travel at least 120km.

The BCG report also challenges the conventional wisdom that EVs would lead to reduced emissions in countries such as China and India, arguing that the benefits would be outweighed by the pollution generated by the extra power produced by utilities.

BCG’s Verma added in his email interview that in India, where electricity generation is largely coal-based, the cumulative carbon dioxide/nitrogen oxide reduction would not amount to much.

This is unlike European countries, where power generation is cleaner as they use renewable energy resources such as solar and nuclear power, he said. These factors will curb demand for electric cars in India, he said.

But Girish M. Rakhe, president of India operations at Reva, rejects this postulate. “The overall greenhouse emission will still be lower than the IC (internal combustion) engine," he said.

Rakhe expects the company’s initiatives locally and overseas will culminate in better volumes. Reva, which exports 20% of its output to 24 countries, has forged a licensing agreement with General Motors India Pvt. Ltd to make electric cars for the Indian market.

The company is also looking at setting up satellite franchisee plants in several countries, he said.

Mahindra and Mahindra’s early EV foray was with Bijlee, an electric three-wheeler, five years ago. Goenka conceded the response has been mixed.

That hasn’t dissuaded the company from venturing into the segment with newer products. The firm will be taking the wraps off a new EV at the Auto Expo, he said.

Verma is optimistic about the potential of electric two-wheelers in India. He said China, the world’s largest two-wheeler market, has managed to put over 17 million electric vehicles on its roads in a very short span. This has been driven by government regulations that prohibit the use of gasoline-powered two-wheelers in cities to curb pollution.

Such two-wheelers can play a critical role in providing feeder services in India’s biggest cities too, said Verma. But for that to happen, the government needs to take the initiative. “It’s high time," said Rakhe, “that the government took some concrete steps in incentivizing the EVs."

Gill points to tax rebates for both manufacturers and buyers of EVs in some European countries as model incentives, proposing a public-private partnership for the sector to succeed.