When somebody tells you, design a hotel for me, how do you start? What is your first thought? 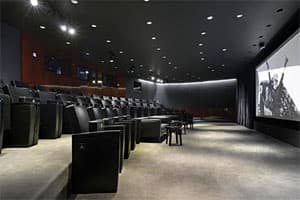 The inside story: The theatre.

That vision was part of ourdiscussions right from the beginning. People think the architect just sits down and dreams up a hotel. Absolutely not. It all starts with the client.

What is the story you are telling through this hotel? What is the narrative?

The story of this hotel has several parts. First, there is London. And the Knightsbridge neighbourhood. For three years, we were focused on nothing but just the building itself, forgetting everything inside. This is the first new luxury hotel in London in the last 40 years. No? That is the first part of the story: Look, this is the first new big, beautiful hotel in London in the last 40 years. Then comes the interior. Here the story is about the material, the atmosphere…and even the lighting. What should be the colour of the lighting, the position, the luminosity. So many things. We started asking ourselves: Should there be a swimming pool? A cinema? Let me put it this way: I don’t imagine a hotel as a collection of empty spaces. A lot of people think that is what we do in our heads. No. In fact, a hotel, any hotel, is a vision of life. You are creating a certain vision of life and creating a building to facilitate that vision of life. You get what I mean? So when I imagine this hotel, I imagine it with people inside. Living a certain kind of life. And then story starts revealing itself.

That is interesting. Somehow you always hear architects talk about the spaces they are making and the inherent quality of those spaces. People sometimes seem secondary to the aesthetics of the space itself. 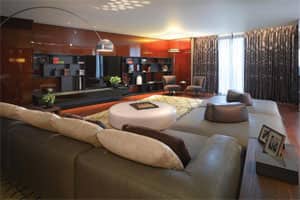 A living room at the hotel.

Don’t you think nowadays there is a tendency to obsess over space? To obsess over form rather thanfunction? Some hotels look nice in photographs but are often extremely unemotional places to live in. They seems so industrial.

Absolutely. Hotels must be organic in many ways. This is because a hotel is nothing if not for the experience. When you buy a watch or a product, you have something tangible in your hands. But in a hotel what is tangible? Nothing. Everything depends on the experience. It is supposed to create memories. So in this hotel, we wanted people to go back with memories of London. And you see that in everything we have done—the lighting, the mahogany surfaces, the black accessories and trimmings and, especially, the theatre. The theatre is the primary public space in London. And we’ve tried to give a theatrical feel to many of spaces in this hotel. On the other hand, the spa and the rooms are much more private, they are your London homes. They are quiet, warm and retrained. When I look at it as a whole, I think what we’ve tried to do is create a space where people want to spend many hours. This is different from a lot of other new hotels in London where the purpose is to give you a base from where you can escape into the city. Here there is no need for escape. There is London on the outside and inside.

Are you happy with the end product?

Sure. I am very happy. It not only looks nice but it is also built very well. We found very good workers in Italy who were brought in to construct the hotel. There is a lot of Italy in this hotel. It was an interesting experience. Not just the end product but the process itself was quite remarkable. Sometimes, you just know that people are not doing something because they get paid for it, but because they care. It is nice when you see this enthusiasm. And I think that enthusiasm is now a part of the hotel. Look at all the young staff members!

What is your favourite space in the hotel? 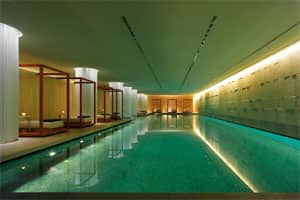 How important is technology in modern hotels? Not just the lights and controls but also things such as TVs and the cinema theatre and so on?

Technology is not an important part of the hotel. Technology IS the hotel. Look up. All the lightings are LEDs. Also, we’ve worked very hard to make it a green building. And this is very hard; you need to use a lot of very clever technology. Also, our rooms are very quiet, and this means very quiet air-conditioners. People don’t realize this, but quiet, environment-friendly air-conditioners are products of some very high technology. Technology is not just WiFi or connectivity. That you will find everywhere. You know what is very good technology? Closing the door of your room and finding yourself in a perfectly quiet, perfectly temperaturecontrolled room. Technology is about being able to build a swimming pool five floors under the ground. It is about being able to design a restaurant where you can see the cooks but can’t smell all the odours from the kitchen.

To me the technological showcase of this hotel seems to be the cinema. Why did you invest so heavily in it? And did you have an architectural vision for that space as well?

In fact, the space was directly inspired by Bulgari’s heritage. Today, you have a booming film industry in India. But in the 1950s, Rome was the capital of the world’s film industry. Bulgari was a part of that atmosphere. Actors like Richard Burton bought a lot of jewels from Bulgari. So did Elizabeth Taylor. So we wanted to evoke memories of the Cinecittà studios and heritage of Rome. In the hotel, we wanted to reiterate this aspect of Italy’s and Bulgari’s history. So we thought why not create a nice space to watch movies?

What is your favourite space in the world? If you had to sleep in one room and nowhere else for the rest of the life, where would it be?

Oh. I think it should be my house. Or maybe my house in the mountains. See, that is my point. The space itself is irrelevant. I like it because of the emotions associated with a space. That is true for everybody. The emotions matter, not the spece.