Volkswagen, after the scandal

Despite confessing to cheating on emissions, Volkswagen was not totally deserted by buyers in October. A look at the numbers.

Despite confessing to cheating on emissions, German auto maker Volkswagen AG was not totally deserted by buyers in October, the first full month after the scandal erupted, although it missed out on the brisk growth its rivals registered. A look at the numbers.

Volkswagen saw an annual drop of 5.3% in global car sales in October. But it has seen worse in the middle of this year. 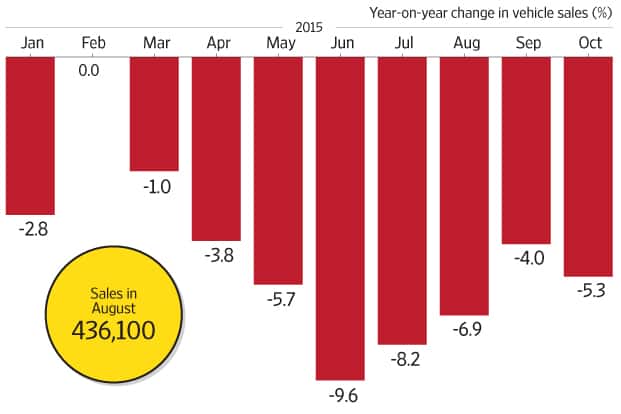 South America is the only region where Volkswagen is facing serious growth issues. To be sure, that was the case even before the emissions scam, and it derives only 8.3% of its sales from there. In its two main markets of Europe and Asia Pacific, October has not been a washout. Cars sold in US

Sales in the US, the epicentre of the emissions scandal, weren’t too bad either. Volkswagen handed out $1,000 gift cards and vouchers to buyers of diesel cars. That said, its flat growth in October needs to be seen in context of the US market, where rivals General Motors and Toyota registered brisk expansion. Cars sold in US by models In India, Volkswagen has been trying hard to break in. It now faces challenges as it revealed that 314,000 cars sold in the country had engines that are at the heart of the emissions scandal. It took another hit in September when it stopped the sale of and recalled its Polo cars for a faulty handbrake. In a season of growth for car makers, Volkswagen went into negative territory in October.