Mumbai: Godrej group sees better demand ahead in residential projects and is not cutting property prices, while it faces a slowdown in demand in its consumer durables business, chairman Adi Godrej said on Monday.

“Working capital for residential is less and demand is also better. We are not cutting prices, our prices are going up," Godrej said at the sidelines of a World Economic Forum (WEF) event in Mumbai. 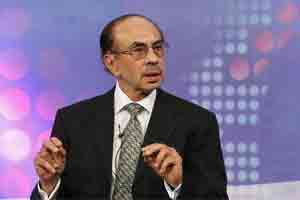 Chairman of the Godrej Group Adi Godrej speaks during a televised debate on “The Indian Spring: Seeking Independence from Corruption at the World Economic Forum (WEF) India Economic Summit in Mumbai. Photo: Reuters

Real estate firms in Asia’s third largest economy have come under pressure as the interest rates have been on the rise for past several quarters, while the sales from the projects is sluggish.

“Overall there is a slowdown as mortgage rates are high. We have added a lot of projects and our growth in the first half was 80%, but that does not signify the industry," he added.

Shares in Godrej Properties, now valued by the market at $943 million, rose 10% in 2011 so far, bucking the downward trend for the Bombay Stock Exchange (BSE) benchmark that lost 15.5% during the same period.

In October, the Mumbai-based firm’s board has approved raising up to ₹ 7.50 billion through means including a qualified institutional placement, a rights issue and a private placement.

Godrej Consumer, another group firm engaged in consumer durables, is facing a slowdown in demand as prices had to be raised across the board, Godrej added.

“It is hard to maintain margins in the current environment. Margins have been sacrificed across the board."

The firm, which has interests in chemicals, animal feed, processed food and beverages, posted a 24% rise in its July-September net profit to ₹ 928.3 million on net sales of ₹ 13.99 billion.