Investments worth $3 billion ripe for exits in healthcare sector: Investec

Its data shows that between FY12 and now, 233 healthcare companies have received a little more $4 billion in funding from private equity (PE) funds and strategic investors, making India’s healthcare sector one of the most sought after destinations for domestic and global investors.

In terms of exits till date, investors have fully exited $61 million and partially exited $653 million worth of investments during this period, while $3.453 billion continues to remain invested, Investec data showed.

While FY16 attracted the highest amount of investments in the sector, totalling $867 million, it was closely followed by FY14 when healthcare companies received $835 million in investments. 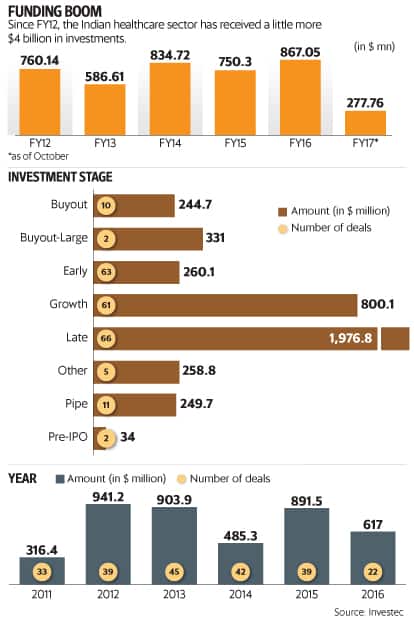 “We believe a large portion of these investments are ripe enough for exit and may start happening as early as within the next few quarters," said Sudhir Dash, managing director of Investec India. “Some of the larger investments have also been in the nature of pre-IPO (initial public offering) rounds and we believe that many investors will take the IPO route for exit if market conditions remain conducive."

There have been several successful healthcare listings this year in which investors have either fully or partially exited or have created liquidity opportunities.

Since December last year, four healthcare services firms have tapped the primary markets to fund their expansion plans and provide an exit to their PE investors.

Collectively, these firms—Dr Lal Pathlabs Ltd, Narayana Hrudayalaya Ltd, HealthCare Global Enterprises Ltd and Thyrocare Technologies Ltd—have raised almost Rs2,375 crore. In June, Mint reported that Metropolis Healthcare Ltd, one of the three largest diagnostic chains in India, is firming up plans to raise around Rs1,000 crore through an IPO. A successful listing would give the company’s existing PE investor, Carlyle Group, an opportunity to partially exit its 2015 investment.

The hospital chain has hired Axis Capital, ICICI Securities Ltd and Edelweiss Financial Services Ltd to manage the IPO to raise up to Rs600 crore. ICICI Venture had picked close to 28% stake in the company in 2014 by investing around Rs220 crore.