Flipkart in talks to buy stake in BookMyShow

Flipkart Ltd is in talks to buy a large minority stake in ticketing platform BookMyShow, as India’s most valuable internet firm seeks to improve customer stickiness and gain a higher share of spending by urban Indians, according to three people familiar with the matter.

The online retailer wants to invest fresh capital into BookMyShow (Bigtree Entertainment Pvt. Ltd) as well as buy shares from some of its investors, the people cited above said on condition of anonymity.

BookMyShow may be valued at $500-700 million if the proposed deal goes through, the people said. Mint couldn’t ascertain the amount that Flipkart plans to invest in BookMyShow, which last raised Rs550 crore in July 2016 from Stripes Group, Accel Partners, SAIF Partners and Network18 at a valuation of more than Rs3,000 crore. Accel is also an investor in Flipkart. 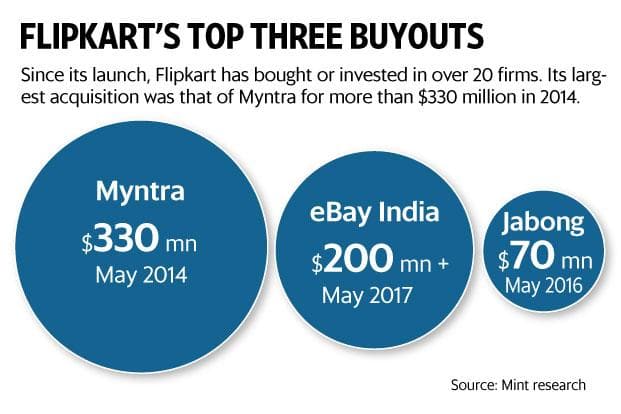 Flipkart had initially expressed an intent to buy BookMyShow, one of the three people said. But the two other people said a stake sale is more likely than an outright sale. Reliance Industries-owned Network18, which is the single largest shareholder in BookMyShow with a 39% stake, is bullish on the firm, these two people said.

BookMyShow, which caters to well-off people in urban India, is one of India’s very few capital-efficient and profitable internet companies. For the year ended March 2016, the firm posted a profit of Rs3.1 crore on revenue of Rs248 crore. The last fiscal year, however, sales growth took a hit because of a push by Paytm into movie tickets. But over the past few months, BookMyShow has fought back and it still controls a majority of movie ticket bookings. The company, which also sells tickets for sporting events and plays, bought Burrp, a restaurant-search platform, in July.

Flipkart is seeking a deal and business partnership with BookMyShow partly to get a higher share of the spending by upper-middle-class and rich Indians. Compared with rival Amazon India’s Prime subscription service, Flipkart lacks an equivalent differentiator. By striking partnerships with the likes of BookMyShow, Flipkart wants to offer a range of services to keep customers coming back to its platform, said the people cited earlier. It also plans to launch groceries this year in order to push repeat purchases by customers.

Flipkart is India’s most acquisitive internet firm. Since starting out in 2007, it has bought or invested in over 20 companies. Its largest acquisition was that of online fashion retailer Myntra for more than $330 million in May 2014. Earlier this year, Flipkart also tried to buy struggling smaller rival Snapdeal (Jasper Infotech Pvt. Ltd) for nearly $1 billion in stock but the deal collapsed in August because of differences over valuation and deal structure, among other things.