Hamburg, Germany: Airbus outsold Boeing almost two-to-one in 2011 after gambling on a revamped fuel-efficient jetliner and delivered more jets than its rival for the ninth year running, while admitting it may struggle to keep its order crown this year.

Figures released by the European planemaker on Tuesday confirmed the popularity of narrowbody jets offering significant fuel savings based on new engines available from mid-decade.

The tally includes over 1,220 A320neos, a revamped 150-seat workhorse launched just over a year ago and which prompted Boeing to update its own best-selling jet as the 737 MAX. 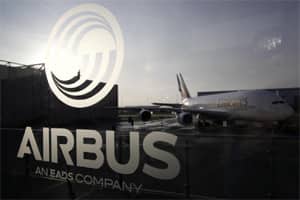 An Emirates A380 plane is mirrored at the entrance of Airbus in Hamburg, Germany. Airbus took in a record number of orders for new commercial aircraft last year as strong demand for its revamped single-aisle plane helped it best fierce US rival Boeing Co. in the race for orders for the fourth year running. AP

Airbus moved first, sweeping up an initial wave of orders in the largest segment of the industry, which is valued at $2 trillion over the next 20 years, but Boeing posted record sales of its larger and more expensive long-haul 777 mini-jumbo.

Airbus confirmed it had delivered 534 aircraft in 2011, as reported by Reuters last week. The 5% rise from 2010 comes as both Airbus and Boeing plan further increases to meet demand from rising Asian economies.

Between them, the world’s dominant airplane manufacturers made industry history by delivering more than 1,000 aircraft and taking orders for more than 2,500 in a single year as Asia’s growing wealth continued to outshine the bleak Western economy.

“It was a tough year for the world economy but traffic is growing and the number of middle classes, by which I mean people with disposable incomes for things like air travel, will triple in the next 20 years," said Airbus sales chief John Leahy.

He dismissed recent fears of a shortage of financing for aircraft deliveries as European banks scale back their lending.

Airbus’ end-year order book included an unexpected decision to downgrade the way it accounts for a key order for 130 aircraft from bankrupt American Airlines.

American’s parent AMR Corp went into Chapter 11 in November, months after splitting an historic 460-plane order between Airbus and Boeing. Under US bankruptcy law, the $40 billion mega-order is on hold until a court reaffirms or cancels it.

Airbus auditors ruled against including the AMR order in the final tally. Leahy said the airline’s chief executive had given Airbus a strong indication that AMR planned to go ahead with the order.

Leahy said he expected Airbus orders to fall back to 600 or 650 in 2012 and resigned himself to the possibility that Boeing would win the order race for the first time since 2006. He cited pent-up demand from Boeing’s existing customers for the 737 MAX, which came onto the market a year later than the A320neo.

The development moves by Airbus and Boeing have reinforced their duopoly against market entrants from Canada, Russia and China, but Leahy said China, which is making its first 150-seat jet, would be a serious competitor within the next 25 years.

While taking a lead against Boeing for now in the short-haul jets used by most low-cost carriers, Airbus is paying a price for delays to its 350-seat A350-1000, a wide-body jet designed to challenge the successful long-range Boeing 777 mini-jumbo.

Airbus pushed back development of the largest of three variants of A350 by two years last summer to deal with industry criticism over the size of its Rolls-Royce engines, but doing so risks losing business when gaps appear in fleet plans.

Airbus said Abu Dhabi’s Etihad had cancelled six of the 25 A350-1000s it had ordered, worth $300 million each at list prices. Leahy insisted Etihad remained committed to the project.