Sydney: Samsung Electronics Co is set to resume selling its Galaxy tablet computer in Australia as early as Friday, after the South Korean technology firm won a rare legal victory in a long-running global patent war with Apple Inc.

An Australian federal court unanimously decided to lift a preliminary injunction, imposed by a lower court, on sales of Samsung’s Galaxy Tab 10.1 — but granted Apple a stay on lifting the sales ban until Friday afternoon.

“It’s hard to expect the ruling to have a major positive impact on Samsung’s tablet business or legal cases in other countries as Apple could appeal ... and sales won’t be restored anytime soon," said Song Myung-sub, an analyst at HI Investment & Securities in Seoul.

“Apple will continue to dominate the tablet market as Amazon appears to be the only viable threat at the moment and other vendors, including Samsung, continue to struggle."

Lawyers for Apple declined to comment after the ruling, but getting a delay in lifting the temporary sales ban could give time for an appeal to be launched.

The ruling is, however, a timely boost for Samsung ahead of the busy pre-Christmas shopping season. While the Australian market is not large, it is a key launch market for Apple products outside the United States. 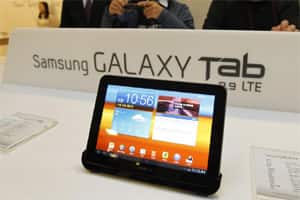 Apple was granted an injunction against Samsung in October, temporarily barring Australian sales of the Galaxy 10.1 tab, which had been seen as the hottest competitor to Apple’s iPad until Amazon.com Inc launched its Kindle Fire.

Amazon said this week it saw a surge in sales of its tablet devices on the crucial “Black Friday" shopping day after Thanksgiving.

Samsung is the world’s top smartphone maker, but a distant second to Apple in tablets. The intensifying legal battle has undermined its efforts to close the gap.

Apple also filed a preliminary injunction request in Germany on Monday to ban sales of the Galaxy Tab 10.1N, a re-designed version of 10.1-inch Galaxy model, whose sales are already banned in that market.

“We believe the (Australian) ruling clearly affirms that Apple’s legal claims lack merit," Samsung said in a statement, adding it would soon make an announcement on the market availability of the Galaxy Tab 10.1 in Australia.

Justice Lindsay Foster told the court he would grant a stay on orders until Friday 4 p.m. (0500 GMT), noting Apple would have to go to the High Court if it wanted this extended.

Apple and Samsung have been locked in an acrimonious battle in 10 countries involving smartphones and tablets since April, with the Australian dispute centring on touch-screen technology used in Samsung’s new tablet.

Apple successfully moved to block Samsung from selling its tablets in Germany and a case in the Netherlands has forced Samsung to modify some smartphone models.

The quarrel had triggered expectations that some of the pair’s $5 billion-plus relationship may be up for grabs. Samsung counts Apple as its biggest customer and makes parts central to Apple’s mobile devices.

An Australian court has agreed to hear that case in March and April, with sales allowed to continue as normal ahead of the hearing on alleged patent infringements.

Shares in Samsung, valued at around $140 billion, were flat in a Seoul market down 0.5%.