Twitter has Dell and many big firms tweeting for revenue

Twitter has Dell and many big firms tweeting for revenue

Dell Inc. is using Twitter to sell personal computers and solve customer problems. International Business Machines Corp. uses it to get research scientists talking. Intel Corp. is there looking for engineers and Microsoft Corp. is sponsoring a Twitter site that carries tweets from executives. 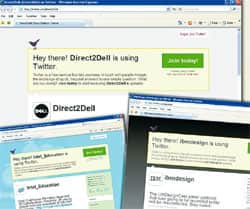 It’s the ability to tap into somebody’s interest at the moment it’s expressed, said Li, founder of Altimeter Group, a San Mateo, California-based research firm that specializes in social technology.

Twitter users in the US increased 15-fold to seven million in February from a year ago, according to Nielsen Online. Facebook Inc. and News Corp.’s MySpace each had more than 50 million. Still, companies can use tweets to get an instantaneous snapshot of what people are saying about their products, or reach consumers who are just about to buy, say, a Dell computer.

Twitter may also be a solution for reaching users that are increasingly immune to traditional advertising. About 24% of 123 businesses surveyed by Forrester Research Inc. are planning to cut traditional ad budgets to boost social-media spending this year.

“More and more, people are becoming aware of the different ways companies can use Twitter," chief executive officer Evan Williams, 37, said in an email. “And as the user base has grown, the value to doing so has grown."

In October, Williams said in an interview that Twitter expected to start making revenue in 2009, probably through advertising. Last month, Microsoft started sponsoring a site that publishes tweets from executives at companies such as Procter and Gamble Co. and Amazon.com Inc. Twitter doesn’t disclose its sales.

Twitter has also spawned a cottage industry of third-party companies that plumb the Twittersphere. Companies such as Boulder, Colorado-based Collective Intellect Inc. and San Francisco-based Salesforce.com Inc. have applications that let clients track customer comments on Twitter. In July, Twitter bought a search engine to help users navigate the site.

Twitter users post messages about music, brands of coffee, the sex lives of their pets, anything and everything. Twitterers direct their musings at groups of users that decide to follow them on the site. Much of the content takes the form of life streams, or short descriptions throughout the day of what a particular user is doing or thinking. It’s those random, often frivolous postings that have attracted ridicule from comedians such as Stewart, host of Comedy Central’s The Daily Show.

“Twitter is more than a forum for random thoughts," said Todd Chaffee, a partner at Institutional Venture Partners, which invested $14 million (Rs70.42 crore) in Twitter in February. In total, Twitter has received more than $50 million in venture funding since it was started in 2006 by Williams and co-founder Biz Stone. Facebook, by contrast, has raised about $500 million from debt and equity, including a $240 million investment from Microsoft that valued the company at $15 billion.