Bondholders come up with new recast plan for Wockhardt

Bondholders come up with new recast plan for Wockhardt

Mumbai: A group of foreign lenders, led by New York-based QVT Financial Lp, which had approached the Bombay high court in December with a winding-up petition against troubled Indian drug maker Wockhardt Ltd, proposed an alternative debt restructuring plan to the firm on Monday.

These lenders had subscribed to 40% of $110 million (around Rs508 crore today) foreign currency convertible bonds (FCCBs) issued by Wockhardt in 2004, and turned hostile after the company failed to redeem them on maturity in October 2009. 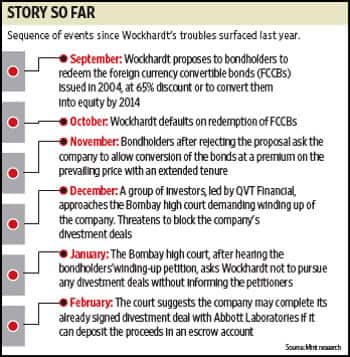 The new bonds will be mandatorily convertible into shares after five years at a 10-15% premium to the price of the company’s shares on the date of maturity of the defaulted bonds in October 2009.

Earlier, while moving the high court, these lenders had said that Wockhardt would not be allowed to pursue any divestment of assets unless it clears dues.

Wockhardt had, in fact, sold some of its businesses to foreign buyers to raise money for repaying a portion of its liabilities, including term loans from Indian banks.

The drug maker had a total debt of around Rs3,400 crore as of March 2009 and faced a financial squeeze due to foreign exchange and mark-to-market loss between 2007 and 2009.

It is not known whether Wockhardt has accepted the proposal or not.

“It doesn’t want to make any comments on this as the matter is in the court," a spokesperson for the company said.

As the shares dropped to Rs182 against the conversion price of Rs486, conversion was not relevant to the bondholders. The company also defaulted in redeeming these bonds at 10%.

Instead, it had offered an alternative proposal to the bondholders to redeem the bonds at a 65% discount or convert them into equity by 2014.

The foreign creditors led by QVT moved the court as the company’s bond restructuring proposal was not acceptable.

Meanwhile, a group of Indian lenders to Wockhardt, including State Bank of India, ICICI Bank Ltd and IDBI Bank Ltd, have approved a corporate debt restructuring (CDR) scheme for Wockhardt. The company is required to repay the loans with an extended tenure by selling some of its non-core assets to raise up to Rs790 crore.

“It is disappointed that neither Wockhardt nor the CDR lenders have engaged in a meaningful dialogue with the holders of the defaulted bonds with respect to this plan," the QVT statement said. “If the company continues to ignore the efforts made by the holders of the defaulted bonds to salvage the situation by restructuring the debt in a mutually acceptable manner, it may remain exposed to this winding up action."

Wockhardt shares dropped 1.99% on Monday to close at Rs152.60 on the Bombay Stock Exchange even as the bellwether Sensex gained 0.28%.