Mumbai: The bidding war for control of Fortis Healthcare Ltd reached its final stage on Tuesday with Malaysia’s IHH Healthcare Bhd making a binding offer of Rs650 crore for immediate infusion into the stricken hospital operator.

The Malaysian company offered to invest an additional Rs3,350 crore in Fortis, subject to satisfactory completion of due diligence. IHH has given Fortis till 4 May to respond to the offer, after which it will stand withdrawn.

This makes IHH the third entity after TPG-backed Manipal Hospital and an unnamed entity comprising Delhi-based businessman Sunil Munjal and some members of the Burman family to make a binding offer to an advisory committee set up by Fortis to evaluate the bids.

KKR-backed Radiant Life Care, which was the last company to enter the race, and China’s Fosun Health Holdings had not submitted binding offers till the time of going to the press.

The advisory committee led by Deepak Kapoor, a former PwC India chairman, is expected to meet on Wednesday and will give its recommendations to the Fortis board.

The winning bid, once approved by the board, will need to be cleared by shareholders in an extraordinary general meeting. 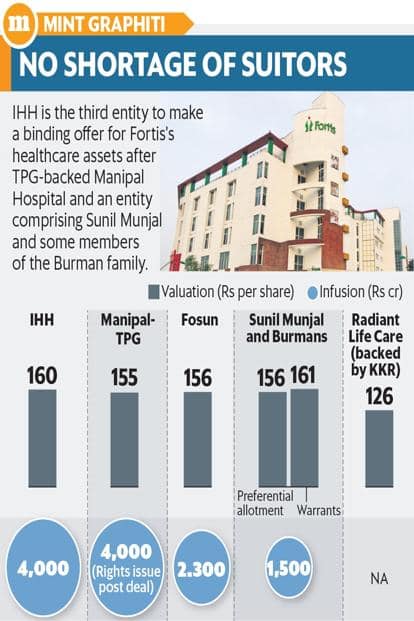 Before IHH made its offer, KKR-backed Radiant was planning to make a binding offer that included upfront acquisition of “two flagship hospitals" to provide “immediate liquidity" to the beleaguered company, according to information available with Mint. “This was to be adjusted against the price in the offer," said a person in the know of the matter.

“Except for this, Radiant’s offer was said to be similar to the one that has been made by TPG-Manipal and involves several mergers and demergers of Fortis assets," this person said.

An email sent to Radiant seeking a response remained unanswered till press time. A KKR spokesperson declined to comment.

IHH Healthcare managing director and group chief executive See Leng Tan on Tuesday wrote to Fortis, stating that the binding proposal was for an immediate primary equity infusion of Rs650 crore in Fortis through a preferential issue at Rs160 apiece. IHH has also demanded the right to appoint two directors on the board of Fortis, apart from immediate access to carry out legal and financial due diligence.

Tan said IIH’s non-binding offer would include an investment of Rs3,350 crore through a subsequent preferential issue, subject to satisfactory completion of due diligence. Both the offers of equity infusion by IHH can be completed by 30 September, Tan said.

Earlier, the Manipal-TPG consortium as well as the Hero Enterprise Investment Office and Burman Family Office combine had raised their offer price for Fortis.

The company had also received an unsolicited non-binding expression of interest from Fosun Health Holdings, an arm of Fosun International