Bangalore: While Indian companies understand that innovation is the lifeline of business, they are only just realizing that the process is neither easy nor systematic. Six years after the model was conceptualized, much before the software industry took client-driven innovation seriously, the Co-Innovation Network (COIN) of Tata Consultancy Services Ltd (TCS) has begun making money, but that one big hit remains elusive. 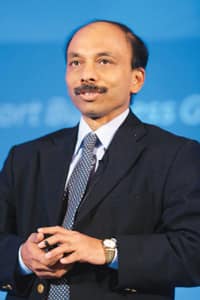 “At least 75 solutions developed jointly with start-ups in the last five years are now part of TCS offering," said chief technology officer Ananth Krishnan. “The COIN model is generating revenue but I’m still searching for a Siebel-like success in India."

Customer relationship management (CRM) software maker Siebel Systems at one point had nearly half the global market share in enterprise software and was acquired by Oracle Corp. in 2005 for $5.8 billion. Still, for all his “creative dissatisfaction", Krishnan says, “in the last five years, a Siebel hasn’t come out of California’s Silicon Valley either".

That may be comforting, but the “derivative" or “platform" solutions and business model innovations that COIN is undertaking with start-ups and strategic partners such as Cisco, Intel Corp., and Hewlett-Packard will keep them merely competitive. They haven’t yet been able to hit upon the kind of disruptive innovation that creates totally new markets.

“We haven’t discovered that yet, but there are a handful of companies in the cloud computing space (that we are working with) which could prove to be disruptive in the next 12 months," he adds.

TCS set up COIN in 2004, soon after the book The Future of Competition, co-authored by the late management guru C.K. Prahalad, enunciated “co-creation" as a strategy for companies to satisfy customers and sustain profitable growth.

Since then, more so after its formal launch in 2007, COIN has used its complex network of start-ups, venture capitalists, established companies, academic institutions and customers in India, Europe and North America to develop solutions for a changing market.

“There certainly is value in business collaboration; it helps us care about customers beyond our products and we are taking more ownership for the problem of the customer," said Axel Henning Saleck, head of the global SAP COIL network, SAP.

“The return on investment that we had expected after 18 months is showing in just 12 months, so clearly it’s effective beyond our expectation," Saleck told Mint when he visited Bangalore last week. Both COIN and COIL are part of each other’s network, though they are yet to develop a solution together.

As a concept, COIN is “fantastic", but it might not yet be bringing enough value proposition to clients, said Nitin Khanapurkar, executive director, KPMG Advisory Services.

“I think it’s not being marketed well to the customers, particularly Indian businesses," said Khanapurkar. “There needs to be more awareness and acceptance at the client level and shouldn’t be seen as a sales pitch."

Companies that haven’t embraced such models are preparing to do so. On Monday, Wipro announced a new strategic external innovation group to be headed by V.R. Venkatesh, who earlier led the product engineering services business of Wipro Technologies.

It will work with the innovation ecosystem outside Wipro to “develop solutions, components or reusable blocks in order to achieve faster development as well as more differentiated solutions in the market", said Venkatesh.

Most of these short life-cycle innovations, where the execution time is two-six months, are driven by customers, experts said.

The game-changing technologies, it appears, still remain the province of garage tinkerers and nondescript entrepreneurs.

“Indian IT companies, in general, have a short-term vision," said Kallol Borah, co-founder and director of HeadStart Network, a platform for showcasing start-ups. “When it comes to innovation, long-term commitment is required; it’s not a quarter-to-quarter thing."

HeadStart has been a COIN partner, which after initial talks in 2008, hasn’t closed any deals with TCS even though it managed to sign co-innovation pacts with technology firms such as Motorola Inc., Honeywell and Intuit Inc. in the same span of time.

“I am currently talking to the R&D (research and development) division of another major IT company… I think these companies need major investments in downstream processing to exploit innovations," said S. Krishna, professor at the Indian Institute of Management, Bangalore, who specializes in information systems, quantitative methods and management of global enterprises.

“Structuring is also problematic as these organizations derive structures from their very hierarchical, project-oriented departments," he adds.

To that end, though, TCS has built linkages with several institutions, including the Indian Institutes of Technology in Mumbai and Kanpur, Stanford University and the Massachusetts Institute of Technology.

Following the key corporate strategy tenet that what matters gets measured, Krishnan is even tracking the impact that his R&D has on TCS’ revenue. “It’s at least 2X of the 5-8% that Western companies are known to derive out of their R&D."

Krishnan is now critically evaluating if the “selfish interests" of COIN stakeholders are adequately fulfilled.

“It’s a game that Western tech companies and system integrators like IBM and Accenture play very well," he said. “Indian IT companies are beginning to learn."