Thanks for Visiting Mint
You seem to have an Ad Blocker on. Please turn it off in order to continue, or whitelist Mint
HOW TO TURN OFF AD BLOCKER
OR
REFRESH IF YOU ALREADY TURNED OFF THE AD BLOCKER
Home >Companies >Hotel developers shy away from DIAL&#8217;s plans

New Delhi: A year after it floated the proposal, the GMR Infastructure Ltd-led consortium upgrading the city’s international airport is finding it tough to locate suitors for the 45 acres it plans to lease out to developers of hotels and convention centres, with demand for the prime real estate waning. 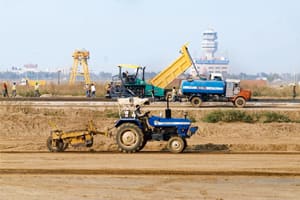 The expected fall in land values has prompted at least one financial analyst to downgrade shares of GMR Infrastructure.

In May 2007, the land lease proposal for the same land parcel had seen raising at least Rs2,835 crore in refundable deposits for 28 years and a licence fee that would be determined through bidding for leasing out the land to realty and hospitality firms.

That proposal, however, ran into regulatory hurdles with the civil aviation ministry opposing the fund-raising plan as it was seen as a means to bypass nearly 46% of the airport’s revenues that Delhi International Airport Ltd, or DIAL, the company operating the airport, had promised to share with the state-run Airports Authority of India, or AAI.

GMR Infrastructure has nearly 250 acres at the airport and some 1,500 acres at the Hyderabad airport (also developed by a GMR-led consortium) for commercial development.

Being able to realize value from the land banks is key to raising money for airport modernization, given that other avenues such as increasing landing and navigation charges, and passenger fees have been opposed by the ministry, except in Hyderabad, where departing domestic passengers pay Rs375 while international passengers pay Rs1,000 each.

But between 2006, when the land lease plan was first mooted, and now, realty market dynamics have changed drastically with waning demand and soaring construction costs, as also reduced airline traffic at Indian airports as airlines pull back flights hit by steep fuel prices.

A senior government official, who asked not to be named, said GMR was finding it difficult to raise money through the land lease as originally planned. The government, through AAI, owns 26% in DIAL.

An analyst predicted demand for land leases would be softer this time around. “We expect much lower property rates and given the tight markets and high borrowing rates for real estate, funding to bid for airport land is a concern," wrote Deepal Delivala of Citigroup Global Markets Inc.’s Mumbai office.

DIAL, then, has tweaked the lease plans slightly to accommodate both small and large hotel and realty firms. The 45 acres has been divided into 13 parcels ranging from 1.6 acres to 7.7 acres, instead of last year’s parcels that went up to 10 acres.

“Yes, the overall sentiment is little bit passive but the project being a good project, (and) land being at a good location… we are providing infrastructure and permissions are in place, (so) we have a reasonably good chance," said a senior DIAL executive, who did not wish to be named, when asked about the response DIAL would get on the land lease plan.

Smaller land parcels will help bring in smaller developers and high net worth individuals who would have otherwise shied away.

Besides, GMR has sent teams to West Asia and South-East Asia to market the land on lease and is in talks with large hotel chains such as Marriott International Inc., Accor SA’s Novotel Hotels, which has already built a hotel in GMR Hyderabad International Airport Ltd, and Claridges Hotels Pvt. Ltd.

The airport operator hopes to start the bidding process by next month.

These concerns have had Citigroup downgrading the GMR stock from buy to hold and lowering its target price to Rs101 from Rs187 earlier.

The current meltdown in equities markets — the Bombay Stock Exchange’s benchmark Sensex index has shed 10.1% since 29 September — does not seem to have been factored into the prediction.

It is not just GMR that seems to have taken a beating on dropping property values. Its counterpart in Mumbai, GVK Power and Infrastructure Ltd, the main shareholder in the airport company, has also had its share price expectation lowered to Rs40 each from an earlier Rs56 on the same grounds by the Citigroup analyst.