Bangalore: Rajendra Naik looks around him and sighs. “There’s no wind today." Bangalore is sweltering at more than 35 degrees Celsius, but still the heat’s not getting to Naik, senior engineer at the John F. Welch Technology Centre (JFWTC), the research arm of technology and services conglomerate General Electric Co. (GE) and its first research and development campus outside the US.

Sure, the small turbines installed on the rooftop need a breeze to achieve optimum speed and generate 1KW of electricity in his green lab. But this is at the heart of the innovation challenge that’s engaged Naik and his 14-member team—overcoming the variability in energy supply from renewable sources. 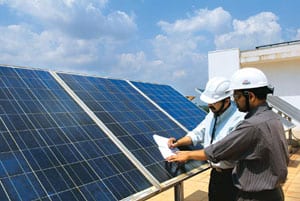 Creating synergy: Solar panels on the rooftop of a building at John F Welch Technology Centre in Bangalore, GE’s first R&D campus outside the US. Hemant Mishra/Mint

Such systems do exist, mostly assembled by systems integrators and capable of working in off-grid environments, but they aren’t cost-effective or modular. Experts say there are compatibility problems between sun and wind sources as the level of power generated varies widely. In an off-grid system, a home owner could, for instance, set up a hybrid energy unit in the backyard to produce electricity for the household. Such an option isn’t currently available and on-grid systems wouldn’t really work.

“No consumer would install a system to feed a few extra kilowatts to the grid nor would any power utility like to tinker with the grid for distributed power feed-in," said S.S. Murthy, a professor of electrical engineering at the Indian Institute of Technology, Delhi.

Murthy is aware of what Naik and his team are doing and is impressed with the idea. “What GE is doing in this area is commendable. Sooner or later, they will make it deployable."

For GE, and the 10-year-old JFWTC in particular, India has long been a seat of innovation, contributing to products as small as a portable ECG (electrocardiogram) machine capable of operating independently of a doctor, and as complex as the NX aircraft engine now used in the Boeing 787 Dreamliner, considered one of the most technologically advanced because of a special type of combustor developed and optimized in Bangalore.

The centre’s healthcare unit has even begun “reverse innovation", where products developed for the local market are finding takers in the developed world. Its most compact ECG unit, the Mac 400, is one such example.

Still, it’s not easy to pin down an innovation as originating from a certain location, more so in a vast global enterprise such as GE.

So far, JFWTC has filed at least 1,000 patents, among which is one that Mano Manoharan, general manager for global research at JFWTC, calls a big-ticket innovation. This, a “trip optimizer", is an advanced energy management system for trains that optimizes fuel consumption based on its composition and the route it takes that’s being used in the US.

“If we had 10 such innovations, it’d be an anomaly," said Manoharan. “It takes a decade or more for truly great ideas to reach the marketplace."

That’s why GE’s research scientists and engineers believe in and practice a “decade of innovation scorecard", celebrating great ideas that have an impact on the world over a 10-year cycle. Just as inventor and GE founder Thomas Edison’s light bulb did, 130 years ago.

Will the hybrid energy system be another light-bulb moment? Maybe. Naik’s lab is at the forefront of GE’s strategic move to develop an integrated, modular network connecting solar, wind and energy storage systems (or batteries) and able to work in different environments. “The power conversion system should be intelligent enough to operate in both on-grid and off-grid environments," said Naik.

His group is working on modular systems that would allow users to, say, after installing a 5kW solar power unit, add a wind system and a battery to store extra energy.

The lab looks simple: a roof-top wind turbine of 1kW and solar panels of 1.8kW generation capacity separately produce direct current (DC) that feeds into a bank of lead acid batteries. An inverter converts the DC power to alternating current (AC) required for home and industrial uses. Some fuse and junction boxes, associated wiring, test instruments, and a bunch of energy-efficient bulbs fixed on a board complete the picture. At the heart of the system the lab is trying to develop are the circuit boards and microelectronics nestled within this.

The system controls and intelligence embedded in this hub will make all the difference. One key purpose is to assess the charge of the battery and adjust the load so that the performance can be optimized; the lack of this feature reduces battery life to three years in present renewable energy systems. Apart from that, when connected to the grid, it’s the electronics that will manage the peak power and provide load levelling.

The team envisions a “circuit topology", or configuration, that’s amenable to scalability. Stacking up or pulling down solar modules and/or wind turbines to the existing system, along with optimized sizing of the battery bank and inverter, will take into account future customer needs in the most economical way, says Arvind Tiwari, an engineer working on the project.

By making the unit modular, the team hopes the goals of a truly decentralized and distributed power generation system can be attained.

The key is to do it right so the technology is reproducible in the long run, says Manoharan. “It’s akin to flying a jet engine; you can’t reboot it midair. You need to get the technology right the first time."

The 118-year-old company knows that well. Listed by several rating agencies as one of the top five innovative firms in the world, GE is driving a range of new technologies and products under its “Ecomagination" initiative, which is basically to go “green" in all the spheres that it operates in.

So when Manoharan talks about the likelihood of a next-generation green battery, specifically in the hybrid energy system and generally within the GE technology portfolio, it doesn’t come as a surprise. Present-day lead-acid batteries are not only bulky and short-lived, but also environmentally hazardous. Manoharan, a materials engineer, believes that both globally and within GE, the science has attained a critical mass and a breakthrough in battery technology is round the corner.

He doesn’t rule out GE’s own battery hitting the market by the time the hybrid energy system is ready for commercialization, though he and Naik are quick to point out that the present goal is to produce a lab demonstration unit by the year-end and then let the company’s business divisions take a call. Innovative as the company is, GE believes a customer doesn’t buy an innovation but a product.

While JFWTC is driving GE’s hybrid energy initiative globally, if the innovation can be adapted for India, Murthy said, it could transform India’s energy map. “The government spends hundreds of crores (of rupees) in laying electric lines under rural electrification programmes. It should instead think of rural ‘energization’ where, using local resources, standalone grids can meet the local need," he said.

While the technology could lead to decentralized power generation, it will still need strong government policy support to work in India, says Murthy.

Made in India: A portable ECG (electrocardiogram) machine capable of operating independently of a doctor, ideal for Indian conditions; the most compact ECG, Mac 400, now being exported; the NX aircraft engine used in Boeing 787 Dreamliner; the trip optimizer; and 1,000 other patents.