Rice is the company's primary business in which it has domestic as well as export operations, said Srikrishna Dwaram, partner, IVFA

“We have been evaluating the food and agri-business space for a while now. We have just acquired a majority stake in SeedWorks, which is in the seeds business with a focus on rice and cotton," said Srikrishna Dwaram, partner, IVFA.

“The investment was through a secondary share purchase, but going ahead, as we implement the growth strategy for the company, we will look at investing more funds in the company," he said.

IVFA raised its fifth fund— Indium V—with a corpus of $700 million in July 2015. Some of the investments from its latest fund include those in deGustibus Hospitality Pvt. Ltd, which owns and operates restaurant brands Indigo and Indigo Deli, non-banking financial company Magma Fincorp Ltd and a re-investment in portfolio firm Atria Convergence.

SeedWorks is involved in breeding, production and marketing of hybrid seeds of rice, cotton, pearl millet and corn. Hybrids of rice and cotton are the mainstay of the company, which conducts its business under the US Agriseeds brand. SeedWorks also has a subsidiary in the Philippines and regulatory approvals for the acquisition of that unit are expected to be completed by the end of the month, said Dwaram.

Dwaram said rice is the company’s primary business in which it has domestic as well as export operations. The company reported revenue of ₹ 150 crore in the last financial year. Of this, sales of rice hybrids contributed almost 70%. The firm’s cotton business is currently small but promising, given the products in the company’s R&D pipeline, he added. 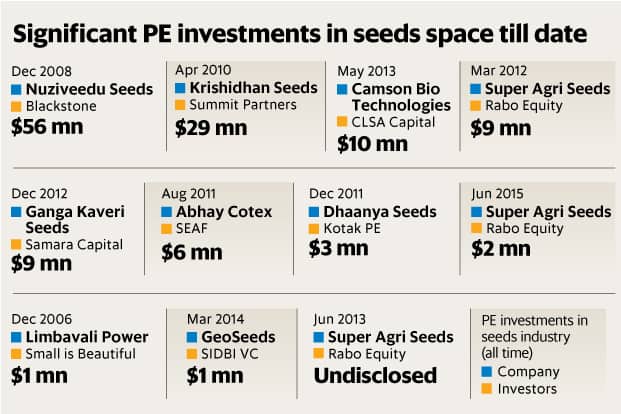 SeedWorks has had a strong focus on research and development and that was one of its attractive features, he said. The research programmes are based in Hyderabad with trial locations in the key agro-climatic zones of India. The company has stayed away from government business, eliminating the risk of government receivables, he said.

While SeedWorks has a presence in the eastern and central Indian markets, it currently doesn’t operate in North East India, a significant market for rice seeds, he said.

In cotton, the company has a strong presence in North India. One of the key value additions from IVFA will be to improve the company’s sales and marketing capabilities, Dwaram said.

“The company has got a really good product portfolio but needs to beef up its sales and marketing efforts and so the immediate item for us will be to bring in new energy into the management team for the same," he said. The investment in SeedWorks is not the first by IVFA in the food and agri-business sector.

In 2013, the company invested $40 million in VKL Seasoning, which manufactures food ingredients and flavouring in India and West Asia, with a strong focus on the quick service restaurants and processed food industries.

The SeedWorks investment by IVFA is one of the biggest in the Indian seeds sector.

The largest was global private equity giant Blackstone’s $56 million investment in Nuziveedu Seeds Ltd in 2008, according to data from Venture Intelligence.

Other significant investments in the space include Summit Partners’ $29 million in Krishidhan Seeds in 2010, $10 million by CLSA Capital Partners in Camson Bio Tech and $9 million in Ganga Kaveri Seeds by Samara Capital.

“There is a fairly strong private equity interest in food and agri-businesses, whether it is seeds or the agri-value chain such as transportation or warehousing," said Raja Lahiri, partner, Grant Thornton India Llp. There is also a renewed focus among entrepreneurs to build businesses in these sectors, Lahiri said, adding, “Fundamentally, it is a very important sector for the economy and therefore it is critical that we see investments in this sector."

The only challenge investors face is to find companies of the right size and scale which can grow, Lahiri said.