New Delhi: At the financial results announcement of HCL Technologies Ltd on Wednesday, chief executive and vice-chairman Vineet Nayar looked slimmer than before. “It’s all because of Anant," he said, going on to say how he recently went on a 120km trek. In a surprise move, Anant Gupta, previously the head of HCL’s infrastructure business, was appointed president and chief operating officer. Gupta’s taking over of the day-to-day operations of HCL will leave Nayar more time not just for long treks but also for figuring out a long-term strategy for the company.

Gupta’s appointment has sparked talk of an eventual change of guard at HCL as it comes a month after Nayar sold his entire shareholding in the company, fuelling rumours of his exit. In a joint interview, Nayar and Gupta spoke about the demand environment, challenges and their new roles. Edited excerpts:

HCL has been growing on the back of restructuring contracts, but if the macro picture worsens, if those dry up...

Nayar: We are in a position of a double-dip recession, which we have not seen before. And the growth is coming from marketshare churning. And, therefore, there is always a concern that how long can you keep increasing your marketshare. We can do it for the next two-three years. Beyond that, I can definitely see the macroeconomic issues remaining challenging. So I am a pessimist on that count. 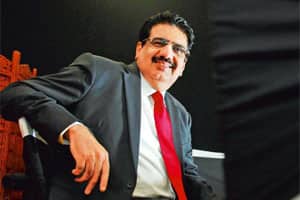 What is this restructuring of roles about?

Gupta: You need to step back and see what has worked for HCL. We had independent business units that drove focus. We have innovation in our culture. And the third aspect is the incubation of ideas. So it’s not just about increasing a particular market segment or a geography. Those are tactical strategies.

Incubating businesses is a completely new construct and that is what has worked best for us, be it the infrastructure services, or the EAS (enterprise application services).

The charter of this specific office is to continue our tremendous profitable growth momentum in the market along with customer satisfaction, which continues to be good and which is achieving milestones. Second focus is the industrialization of the interfaces. The third is rethinking our cost structures.

How will the responsibilities be divided between the two positions?

Nayar: I think the before-mentioned three areas will be the ones on which Anant will focus on, and so will I. They are very critical and that’s why we have created the position of chief operating officer because historically that has been our structure.

But I was my own chief operating officer because we were on a wild west and now we have a structure to that. In addition to what Anant has said, the biggest imperative for us is that infrastructure has taken us very, very far, it now needs innovation and we have some very interesting ideas on what we want to do there. Without EAS and infrastructure, HCL would have been an underperformer.

If you were to pick up one reason why HCL has succeeded (it) is because we incubated these two businesses really well... So my second imperative for the company, which is my charter, is to incubate new sets of businesses.

Also, around 2-3% of the client’s revenues goes into IT (information technology), but 8-9% into marketing. So the question is should HCL focus on that 2-3% or should HCL venture into some other part? So how does HCL get into the business spend and not just IT spend, which is not necessarily business consulting.

A lot of people have done business consulting and it has not worked out for them. I think we need answers to these three things. So, in addition to those three imperatives that Anant is going to drive, which are my bread and butter, these are three things on a longer term which I need to spend time in building. That’s why this new role.