"storyDirectUrl"
OPEN APP
Home / Companies / News /  Are PSU banks getting a hang of their bad loans?

Are PSU banks getting a hang of their bad loans?

As of 30 September, GNPA as a proportion of total advances given by state-run banks, or simply the bad loans rate, was at 14.08%, an improvement of 50 basis points from the rate on 31 March.

The situation might be finally looking up for state-run banks. As of 30 September, the total bad loans of these banks stood at ₹ 8.69 trillion, a 3% decline from ₹ 8.96 trillion as on 31 March. However, the overall bad loans rate still remains very high.

Bad loans or gross non-performing advances (GNPA) are largely loans that haven’t been repaid for a period of 90 days or more. As of 30 September, GNPA as a proportion of total advances given by state-run banks, or simply the bad loans rate, was at 14.08%, an improvement of 50 basis points from the rate on 31 March. One basis point is one hundredth of a percentage point. What this basically means is that for every ₹ 100 of loans given by these public sector banks, borrowers have defaulted on ₹ 14.08, against the earlier ₹ 14.58, which is a slight improvement. 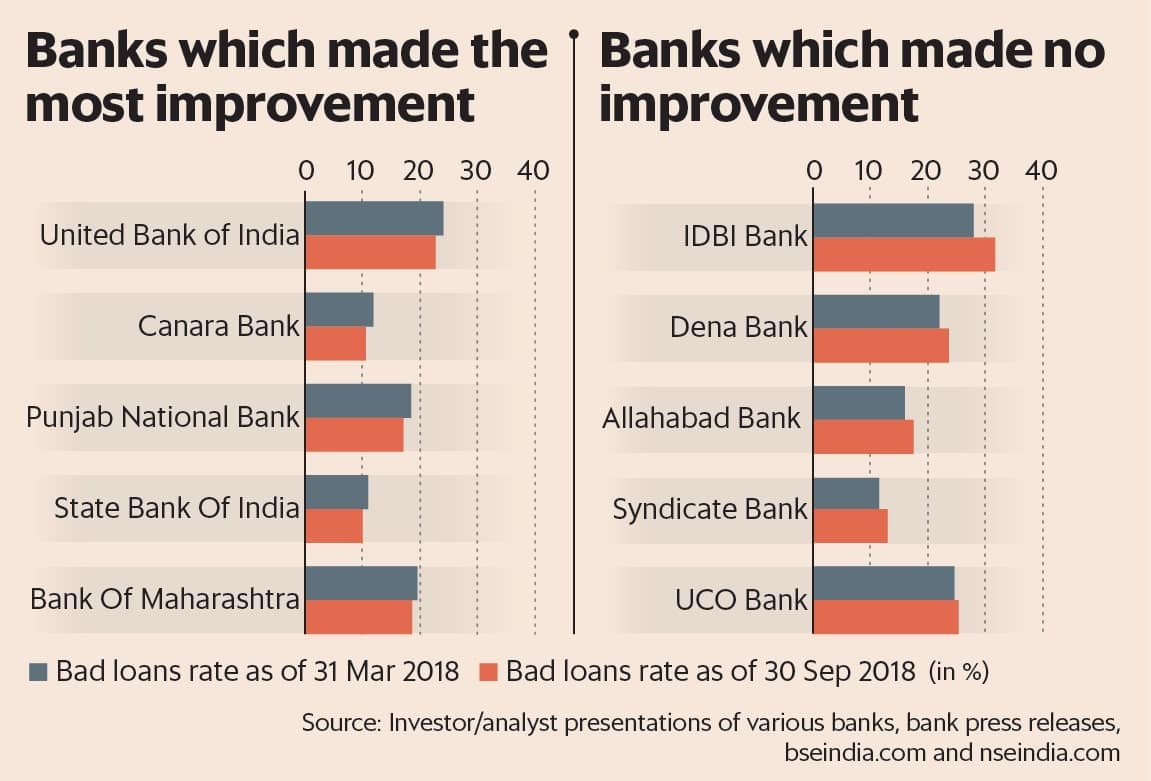 How many banks have seen an improvement in their bad loans?

Which was the worst performing bank?

IDBI Bank, in which the government had a controlling stake that it sold to Life Insurance Corporation of India recently, saw its bad loans rate worsen from 27.95% to 31.78%.

What does all this really mean?

Over the years, public sector banks have not been recognizing their bad loans. Various ways were used to ensure that the problem did not come to light. Finally, in 2015, the Reserve Bank of India cracked down on these banks and forced them to recognize their bad loans. While more data will be needed in the future to say this more forcefully, it seems that the recognition issue might finally be getting out of the way. And that’s good news. The first step to solving a problem is recognizing that it exists.

What does the future hold for these banks?

The overall bad loans rate is still very high. The recovery of outstanding bad loans will not be easy. Banks will have to continue to set aside money for these loans. Hence, the government will have to keep recapitalizing many of these banks. Somewhere down the line, the government may have to decide whether it wants to continue investing in these banks or use the taxpayer money in a better way somewhere else.