Mumbai: Bajaj Auto Ltd announced on Thursday that its new 100cc motorcycle, branded Discover DTS-Si, will be available in showrooms on 27 July. 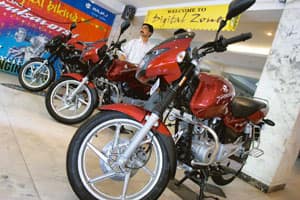 Strategy rethink: Bajaj motorcycles displayed at a showroom in Mumbai. The company had earlier decided to exit the 100cc segment. Prashanth Vishwanathan / Bloomberg

The motorbike is aimed at the premium entry-level segment. Rival Hero Honda Motors Ltd, India’s largest two-wheeler maker, has a market share of at least 70% in the entry and executive segments.

According to industry nomenclature, 100cc bikes are entry level, while 125cc and 135cc motorcycles comprise the executive segment.

The move is an about-turn for Bajaj Auto, second largest two-wheeler maker by volume, from its earlier decision of exiting the 100cc segment, which has been a drag on its profitability. Entry-level bikes account for about 25% of the domestic motorcycle market.

However, S. Sridhar, chief executive officer of the two-wheeler business at Bajaj Auto, insisted that the company’s strategy has not changed.

“We had said we will not be spending money on a entry-level 100cc bike," he said over telephone, claiming that the new bike would not be a regular 100cc model but would have “all the qualities of a long-distance bike," and would go 80km to a litre.

While Hero Honda sells the Passion and Splendor models in the entry-level segment, Bajaj sells the Platina. Bikes in the segment are priced between Rs30,000 and Rs39,000.

Bajaj Auto is looking to fill the gap in its product portfolio that exists between entry-level bikes such as the Platina and the 135cc Discover in the executive segment. The new bike will be priced between those models. The Delhi ex-showroom price of a Platina is Rs34,000 while the 135cc Discover costs between Rs48,000 and Rs50,000.

Bajaj has made several unsuccessful attempts to break the stranglehold Hero Honda has in the entry and executive segments, which together accounts for at least 75% of the bikes sold in India.

Sridhar conceded that the reference point for an average entry-level buyer has been the Hero Honda Passion or Splendor. “One more product in the 100cc segment will help wean the customers away from a Splendor," he claimed.

An analyst said the shift in strategy is because the firm has not been able to generate sales and has been consistently losing ground to Hero Honda.

Joseph George, a Mumbai-based analyst with foreign brokerage BNP Paribas Securities Ltd, was sceptical about the launch, saying he wouldn’t read too much into it as euphoria over a new product from Bajaj has mostly been short-lived. “The company’s track record with respect to new launches hasn’t been too exciting," he said.

Sridhar said the new bike has been developed keeping in mind the needs of a small town, and that this would help the company improve its volumes. “We will reach a volume mark of 200,000 per month in the domestic market from August 2009 onwards," he added.