At the seventh edition of the Yes Bank Transformation Series, some of India's brightest minds offer solutions to promote India as an MSMEexporthub

The past decade has witnessed an exponential rise in the adoption of smartphones, internet connectivity and e-commerce. This has subsequently opened up the entire country to smaller retailers and manufacturers.

In this backdrop, with the rise of micro, small and medium enterprises (MSMEs) adopting e-commerce, the next pillar of sustained growth will be to tap into global markets. Invest India, the National Investment Promotion and Facilitation Agency of the government of India (under the Department of Industrial Policy and Promotion), partnered with Yes Bank Transformation Series, will present this challenge to the brightest minds across B-schools and tech institutes for crowd sourcing perspectives and solutions on how MSMEs can build momentum on growth and capture opportunities presented by global markets.

Yes Bank Transformation Series, which has emerged as an idea crowd sourcing platform has partnered with national institutions over the last three years, seeking to find answers to nationwide challenges. In 2016, the platform had partnered with the ministry of new and renewable energy, government of India, with students tackling the challenge of increasing the usage of roof top solar and making it viable. Last year, in partnership with Atal Innovation Mission, NITI Aayog, the platform sought ideas on the Indian government’s ambitious goal of doubling farmer income by 2022 through technology interventions.

The Grand Finale of the 7th edition of Yes Bank Transformation Series witnessed 41 students comprising 15 teams from top educational institutes address themes on how to increase B2C exports from India, initiatives to promote India as a leader in MSME exports, and how Indian MSMEs can further leverage global opportunities. The solutions were presented to an eminent advisory council comprising subject matter experts and senior representatives from Invest India.

Eyes on the (bigger) prize

The sizeable impact of e-commerce on India’s MSME sector supplemented by policy, market and technology interventions are the need of the hour to ensure prosperity for associated industries and the Indian economy as a whole. The forthcoming national e-commerce policy aimed at levelling the playing field for foreign and domestic players, offers significant opportunities for the MSME sector.

Rana Kapoor, managing director and chief executive officer, Yes Bank, said: “Over the last five years, this platform which we created as a case study challenge has now become an innovator’s club—visualizing and actualizing innovations not only for us and our partner organizations but also for national challenges set by government agencies. Some of the ideas presented today, if implemented, have the potential to be game changers in the MSME space, and this is a matter of great pride for us. For us and for tomorrow’s leaders who are an integral part of the Transformation Series, the challenge next year would be to co-create solutions using emerging technologies like AI/ML, blockchain, big data, which can directly be implemented across sectors." 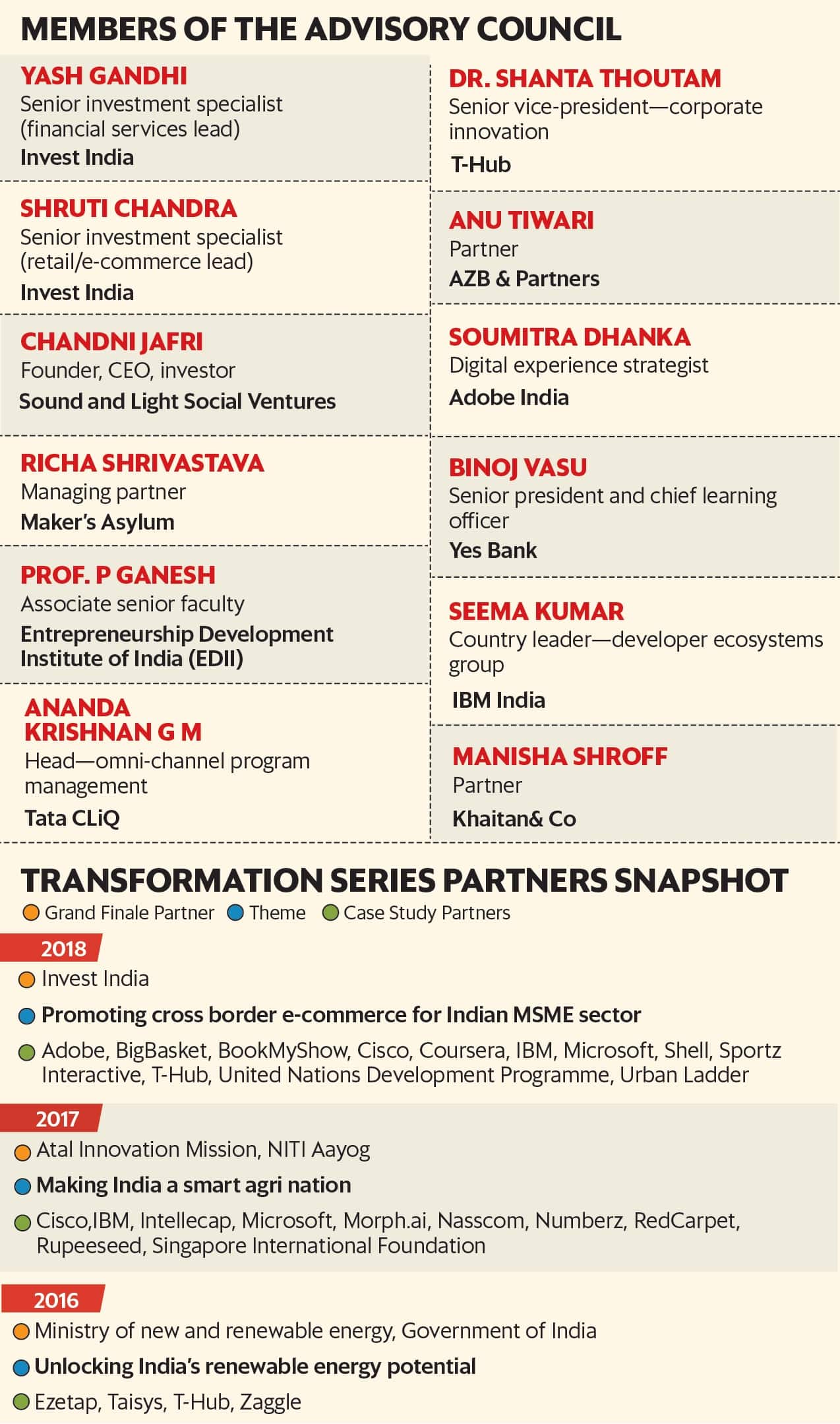 At the finale, Deepak Bagla, managing director and CEO of Invest India, said: “MSMEs are the pillar of India’s economic growth, contributing over 28% to India’s GDP (gross domestic product). Today, MSMEs are embracing e-commerce as an opportunity to increase their geographical reach and access at minimal costs. Proactive support from the government and increased awareness will help create an online presence with access to a global audience. I believe the Yes Bank Transformation Series is a great initiative to catalyse growth of this sector by leveraging the brightest minds towards ensuring that MSMEs can benefit from the undeniable advantages of online platforms."

Last leg of the journey

The significance of the journey of over 100 days filtered into the morning session of the Grand Finale 2018 on 28 November. The top 15 teams arrived and presented exhaustive solutions to the advisory council. After an intensive round of debate, discussions and deliberation, it was decided that three teams had finally conquered.

‘B Squad’ from IIM-Bangalore edged out ‘A Team Has No Name’ (Indian Institute of Foreign Trade) and ‘Cryptonite’ (SJSOM, IIT Bombay) to win the Yes Bank Transformation Series 2018 award. “At the finale, I was amazed by the ideas and the depth of the solutions presented by all participating teams. The judging panel was very diverse with industry experts from multiple domains. The questions asked by the panellists were very thought-provoking and also helped us in realizing the possible areas of improvement and further research, which we hadn’t even thought of. And lastly, it was an amazing feeling when I realized that we had won," said Farhan Ansari, a member of the winning team from IIM-Bangalore.

And the winners are...

Samanvay, an ecosystem to bring together disconnected bodies, processes and policies. The platform will be fortified with a comprehensive micro, small and medium enterprises (MSMEs) e-export policy to ensure coordination between government bodies, private companies and MSMEs in driving business-to-consumer, or B2C, e-commerce export growth.

Project Disha will be the on-boarding and pull initiative under Samanvay at the district level, aimed at assisting micro, small and medium enterprises to develop internet/e-commerce literacy.

This would enable on-boarding of MSMEs (generating awareness of required approvals/licences), sustainability (via single-point nodal body for all issues), and support through creating awareness on best practices, quality standards and technology.

First Runner-Up: A Team Has No Name, IIFT

For promotion of cross border e-commerce, the team recommended a four-pronged strategy to be implemented by the government–consolidation of rules and regulations through a single government policy for e-commerce, aggregator-led MSME cluster development model, amendments to foreign trade policy and simplification of customs, set-up e-commerce pilot zones to offer integrated services such as customs clearance, registration of goods, and bonded warehousing.

The team also proposed an e-commerce initiative called UnboxIndia, a campaign for an assorted gift box of authentic local Indian products to customers abroad, packaged as an experience.

The team proposed a single national digital platform for MSMEs to obtain information and submit documents, and to provide them with the facility of bonded warehouses to allow storage, distribution and logistics operations of goods awaiting clearance from customs duties in the destination country.