Data shows how airlines' cost of flying, which has come down, is fuelled solely by cheap fuel

Mumbai: Airlines seemingly in the pink of health may find any reversal in the slump of oil prices to be mortifying.

Data shows how airlines’ cost of flying, which has come down, is fuelled solely by cheap fuel. Take out fuel, and their costs actually soared.

According to CAPA India, a division of CAPA Centre for Aviation, an aviation consultancy, Indian airlines’ cost per available seat kilometre (CASK), a key metric of operating efficiency, shows cheap fuel has actually masked rising costs at the country’s airlines.

This means airlines could easily tip back to bad times if oil prices start rising, analysts and industry executives said.

In India, fuel costs account for about 45-55% of the revenue of domestic airlines, and a 4% drop in fuel cost adds around two percentage points to the operating margin of airlines.

CASK excluding fuel has gone up across the board, barring Jet Airways (India) Ltd. The airline has, in fact, posted a marginal decline of 0.2%.

“So, there is no magic behind airlines making money, other than jet fuel cost magic. If you take out the fuel cost from the airlines’ operating metrics, their strategies are falling flat," an airline consultant said, requesting anonymity.

He added that almost all airlines made money as they benefited from cheaper fuel and there was no secret sauce for Indian airlines other than lower jet fuel cost. 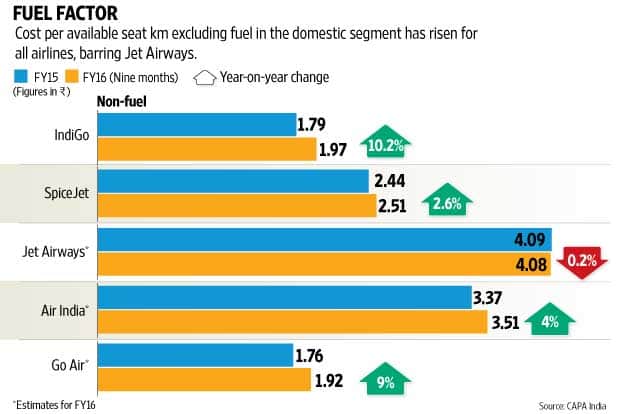 Buoyed by profits, many airlines have placed large plane orders, and others are planning to do so. According to the consultant quoted above, these airlines will be in trouble if fuel prices rise by the time the planes start arriving.

“It will lead to the situation of 2008," he cautioned, referring to a previous period when airlines did not want to take delivery of planes as higher fuel prices led to costlier operations.

SpiceJet chairman and managing director Ajay Singh last week said he is not expecting oil prices to stay where they are now. However, he said the current cash flow is capable of meeting the debt-servicing capabilities and working capital requirements.

CASK for Jet Airways was at ₹ 3.20 for the third quarter of the current fiscal year, against ₹ 3.36 in the year-ago period. Ball said he is aware of the oil dynamics and the airline has resorted to ruthless cost-cutting including renegotiating contracts and increasing aircraft utilization.