What triggered the violence at Maruti&#8217;s Manesar factory?

What triggered the violence at Maruti’s Manesar factory?

Manesar: Maruti Suzuki India Ltd’s Manesar plant was witness to prolonged labour strife last year, but the violence unleashed on Wednesday that led to one person being killed caught its victims completely unawares.

“Some of us jumped off the first floor to save our lives as we saw a mob of workers, hundreds of them, rushing towards us," one of the injured Maruti officials told reporters at a hospital in Gurgaon on Thursday. He didn’t want his identity to be disclosed because he feared for his safety.

They were armed with car parts, rods and other implements, the official said. They didn’t spare women either, said the official whose arms and legs bore marks of the encounter. The company said the violence was planned, while the union denied there was any conspiracy. 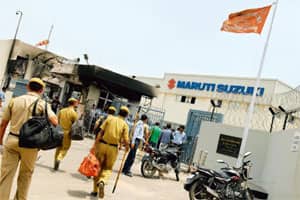 The person who died, Awanish Kumar Dev, general manager (HR), “was burnt to death by the mob", the company said in a press release. Dev’s charred body was recovered by the police late on Wednesday night and identified by his family on Thursday.

“The Maruti Suzuki Workers Union is anguished at the recent developments (at) Manesar where the management has resorted to anti-worker and anti-union activities in a pre-planned manner, leading to the closure of the factory yesterday," Singh said in a statement.

Wednesday’s violence left at least 100 company officials, including Japanese executives, injured. Vishal Sehgal, a doctor at Artemis Hospital in Gurgaon, said most of the officials admitted had head injuries and broken arms.

The clash assumed diplomatic overtones, with the Japanese embassy issuing a statement in which it condemned the violence.

“The embassy of Japan strongly deplores the loss of life...caused by the sabotage perpetrated by a group of workers at the Manesar plant...and condemns the violence and barbarism," it said. It called on the state of Haryana, where Maruti is based, to punish the guilty and enforce law and order. “We expect that the Manesar plant will resume its operations and normalcy will be recovered at the earliest."

Maruti has plants in Gurgaon and nearby Manesar. The Gurgaon plant is functioning normally, the company said.

The company said the violence didn’t stem from an “industrial relations" dispute over wages or working conditions, but was orchestrated mob violence at a time when operations had been normal over the past many months.

The Gurgaon police have formed a special investigative team of six officers under assistant commissioner of police Ranbir Tomar. The police have arrested 88 workers under various penal codes, including attempt to murder and assault on government servants.

“We have deployed 1,200 police personnel at the plant and formed a special investigative team to investigate the matter," said Maheshwar Dayal, deputy commissioner of police, Gurgaon.

“Whatever happened is unfortunate and I hope the concerned authorities will take the required action and the guilty (are) punished," he said. Labour is a state subject.

The violence is unlikely to have been premeditated and could have just been be guided by a herd mentality, said Rajesh Chakrabarti, executive director at the Bharti Institute of Public Policy and a clinical associate professor of public policy at the Indian School of Business, Hyderabad.

The union has said the violence stemmed from an altercation between a worker and a supervisor.

A senior company official said on condition of anonymity that the situation had been building up for the past 8-10 days, with several instances of worker hostility. “Cases of manhandling and workers spitting on supervisors’ faces were common," said this official. “We also approached the police."

An undercurrent of tension seems to have flared up on Wednesday, said Mahantesh Sabarad, senior vice-president, equity and research, Fortune Equity Brokers (India) Ltd. “It tells us that last year’s events are still fresh in workers’ minds and they are unhappy with the last year’s decisions."

Late last month, union leaders reiterated that demands agreed to by the company in 2011 had not been met. Workers had wanted company transport to and from their homes, better working conditions, regularization of leave, and higher wages.

“Not much has improved barring additional transport facilities to areas like Rewari and Jhajjar," Sarabjeet Singh, general secretary of the Manesar plant union, said in the June interview.

Sandeep Dhillon, the union’s chief patron, said at the time, “They still cut our salaries if we take more than four days’ leave in a month."

Dhillon, Sarabjeet Singh and Rammehar Singh, the union’s president, were not reachable on Thursday.

Pravat Chaturvedi, a former labour secretary, said the Maruti management could have handled the situation better. He blamed the incident on the “arrogance of the management".

“Even last year, when there was a settlement, I had said this is not the right way to deal with these issues," Chaturvedi said. “I had also said that the company will suffer in the future. Look at what has happened."

Mint reported on 23 April that the union had sent a notice asking for a doubling of salary and enhanced transport facilities, among other demands.

The Economic Times newspaper reported on 20 June that the Haryana labour department had initiated proceedings against Maruti executives for allegedly violating last year’s agreement with workers.

Maruti Suzuki had committed in that accord to form grievance redressal and labour welfare committees at its Manesar plant. These have not been set up and wage raises are still under negotiation.

Maruti’s production last year was disrupted by the industrial action at Manesar, which caused a revenue loss of Rs2,500 crore.

The strike was called off following a tripartite agreement involving the management, workers and the state government of Haryana. It later emerged that 30 workers, who had been the strike’s main leaders, were paid by the management to quit the company. The workers received a combined Rs4.2-4.8 crore, Mint reported on 8 November.

Maruti said the company is still assessing the damage to property and facilities. “What is clear is that the office facilities have been burnt beyond repair, as have the main gate, security office and the fire safety section," the company said.

Rammehar Singh in turn said some of this was done by persons hired by the company.

“The bouncers, who are antisocial elements on hire, also destroyed company property and set fire to a portion of the factory," he said. “The gates were later opened to oust the workers and enforce a lockout by the company."

Sabarad of Fortune Equity Brokers noted that the violence has taken place as Maruti recovers from last year’s losses.

“This incident could do permanent damage to their market share because it has happened at a plant where capacity was ramped up significantly and manufactures popular models," he said. “Even if we assume the company takes stern action againts errant workers, that mistrust between the management and workers will be there for a long time. It’s worrisome for investors "