Foreign cargo ships to be allowed on local routes

Foreign cargo ships to be allowed on local routes

Bangalore: India is set to ease a key law by permitting foreign registered container ships to carry cargo between the country’s ports, as long as it is shipped out or in through the international container trans-shipment terminal or ICTT at Vallarpadam in Cochin port, marking a significant?change?in?the?current?policy.

India’s coastal trade (shipping cargo between different local ports) is reserved for ships registered in India and foreign ships can be hired only when Indian ships are not available, according to the so-called cabotage law.

A foreign shipping line currently cannot carry a container either to or from the Vallarpadam ICTT to any other port in the country, hampering its operations following the February 2011 start.

A panel of secretaries headed by cabinet secretary Ajit Kumar Seth discussed the proposal on Wednesday. The likely policy change comes with a rider. The relaxation will be only for export/import containers or transshipment containers going through Vallarpadam. And it will be for a limited period of three years till the country’s coastal shipping sector becomes competitive with the introduction of tax breaks, enabling local fleet owners to expand capacity to meet demand, at least three people who attended the Wednesday meeting said, speaking on condition of anonymity because they are not authorized to discuss the deliberations publicly. 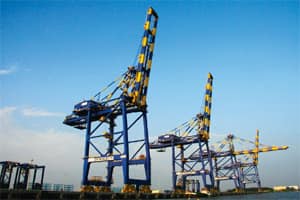 DP World Pvt. Ltd, the world’s fourth biggest container port operator majority owned by the Dubai government, won the 30-year contract to build and operate the ICTT in a public auction in 2004. The first phase of the terminal, built at an investment of ₹ 3,000 crore, can load one million standard containers a year. A spokesperson for DP World declined to comment.

“Huge money has been invested in setting up the Vallarpadam facility, but the cabotage policy was acting as a constraint in realizing its full potential," said a secretary to one of the government ministries and one of the three people mentioned above.

“So, you could either let the infrastructure created with huge investments remain idle or take some action to see that it is utilized to the fullest extent possible," this person said, adding that “a relaxation of law is to be tried out for a limited period to see how it impacts the ICTT and how the security concerns are addressed."

The Indian National Shipowners Association, or Insa, a local shipping industry lobby, continues to oppose any relaxation in the cabotage law.

“The cabotage law is strictly enforced in many countries. It will not only affect the local fleet owners when foreign lines ply domestic routes, but there are security concerns also," an Insa spokesperson said.

Local firms that run port facilities have also opposed easing the cabotage law just for the Vallaprapadm facility, fearing that their ports will be reduced to the status of feeder (smaller) ports once this happens.

“If the cabotage is relaxed, it should be relaxed for all the ports and not just for Vallarpadam," said a director at Adani Ports and Special Economic Zone Ltd, which runs container facilities at Mundra port.

Vallarpadam was designed to cut India’s dependence on neighbouring hub ports such as Colombo in Sri Lanka, Singapore, Salalah and Jebel Ali in Dubai, Tanjung Pelepas and Port Klang in Malaysia to send and receive container cargo, thus saving time and cost for exporters and importers. India’s exporters and importers incur extra costs in excess of ₹ 1,000 crore a year on transshipment of containers through other ports, according to the shipping ministry.

India’s exporters and importers pay an additional ₹ 600 crore every year to ship their containers via Colombo alone, the ministry said.

A container transshipment terminal such as the one developed at Vallarpadam acts like a hub, into which smaller feeder vessels bring cargo which then gets loaded onto larger ships. Larger vessels bring about economies of scale, and lower the cost of operations for shipping lines, which then translates into lower freight rates.

“Indian legislation does not permit feeder services between Indian ports on foreign flag vessels," he said. “If India wants a hub port to be a reality then it should be allowed to compete with Colombo, Singapore, etc, which provide the shipping line freedom to determine the networks," said S.S. Kulkarni, secretary general of the Indian Private Ports and Terminals Association (IPPTA), a port industry lobby.

“The ICTT can develop as a transshipment terminal for the subcontinent only if foreign flag vessels are permitted to carry export/import trans-shipment containers from any of the Indian ports to the ICTT or vice-versa," said a spokesperson for the Container Shipping Lines Association, or CSLA, a body representing foreign container firms operating in India.

“If the cabotage law is interpreted to treat trans-shipment containers as domestic cargo, it will be a huge disincentive to shipping lines that operate both mainline vessels and feeder vessels. While the same shipping line can carry their trans-shipment containers from Colombo to any port in India, they don’t have the freedom to operate to other Indian ports from Vallarpadam. This has discouraged large shipping lines from moving their operations from Colombo to Cochin," a spokesman for the union government-controlled Cochin port said.