Home >companies >The link between organizational culture and profitability

The link between organizational culture and profitability

The first-of-its kind report is co-authored by Raju Bhinge, chief executive of TSMG, and Kamalika Mitra, project leader, organizational effectiveness. The Strategy Culture Alignment Report attempts for the first time in India to assess the impact of such alignment on profitability. 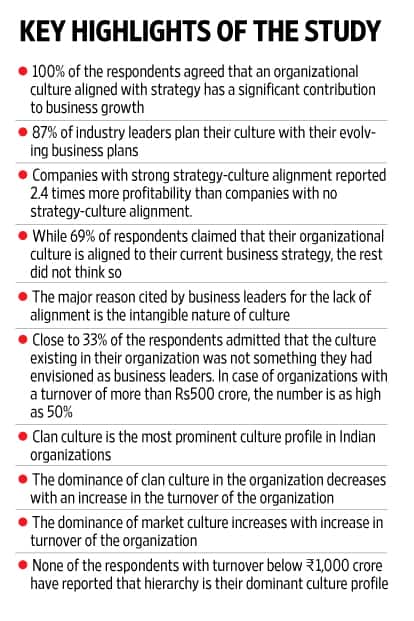 “Companies with strong strategy-culture alignment reported 5% more profitability than companies with low strategy-culture alignment", is a key finding of the report. The study was conducted across 96 organizations of various sizes—those with a turnover of ₹ 100 crore and less; ₹ 100 crore-1,000 crore; and over ₹ 1,000 crore, and aims to be a reference point across various sectors.

What is the need for such a study? The report notes that in a recent global workforce insights survey, organizational culture features as one of the most important parameters of the employee value proposition. Bhinge says for organizations to effectively execute their business strategy, the organizational culture has to be well aligned with the strategy. “Quite often, businesses underperform not because of poorly crafted strategies, but because of inadequate alignment of culture with strategy," he says.

The study also goes on to say that organizations could build an impactful business proposition if they align the softer aspects of culture, such as values and norms, and the harder dimensions, such as structure and processes, around their chosen business proposition. This would ensure that culturally, the entire workforce is poised to perform and behave in sync with the strategic philosophy of the organization.

“Our report indicates a correlation between profitability and a strong strategy–culture alignment. Hence, an organization which is able to get the right balance between its strategy and the appropriate culture profile to complement the same would tend to find the road to profitability smoother. The above concepts are not mutually exclusive," Bhinge says.

According to him, typically, culture may be defined by business leaders as the “soft binding force in an organization constituting the values, guidelines and norms".

Mitra says, “A planned culture, which is significantly modified and created consciously, keeping in mind the organization’s mission and vision, the external industry climate and the ever evolving varied changing needs of time, could well be any organisation’s strongest wheel in the continuous fight for profitability and growth."

According to her, even international companies would display similar patterns of culture profiles positioned across the four quadrants in the competing values framework (see chart).

The strategy-culture alignment of these companies would vary, depending on the so-called home culture and external environmental factors, she notes.

The study reveals that empirical evidence and studies conducted in the past have shown that effective culture can account for a 20-30% increase in corporate performance when compared with culturally unremarkable competitors. The right organizational culture can boost employee discretionary effort by up to 30% and improve employee intent to stay by 38%, leading to overall improvement in performance.

“The ad-hoc culture found in many organizations is often a result of the company’s attempt at survival and hence embracing ‘ whatever works’. The outcome of this could be explained by the disappointment of many a leader, in finding a Frankenstein in their organizational closets—which they do not know how to manage anymore," the study notes.

The study finds that very few organizations in India work towards a systematic and planned culture which supports their business focus over the years. To achieve this objective, the creation of ‘culture calendars’, similar to long-term business plans that are created in every organization, would be very useful, the study suggests.

“A culture which is working well today could be the recipe for an organization’s stagnation and inability to compete with peers and understand its customers tomorrow unless it is adapted and modified to the growth story of an organization. This study demonstrates the need for organizations in India to take culture as a distinct parameter in the growth plans their organizations aspire to achieve and not as an accidental outcome over time," the study concludes.

Bhinge points out that clan culture is found predominantly in Indian organizations. But as the size of the organization grows, the study observes an inclination towards market culture characterized by an orientation to results.

“Our analysis reveals that organizations which are smaller in size tend to have either clan culture or adhocracy culture. Clans may be defined as collaborative and adhocracy by innovation," adds Bhinge.