Mumbai: Even after consumer goods companies increased prices and pared advertising budgets in the three months to 31 December, their margins remained under pressure—a factor some experts say will trigger another round of price hikes. 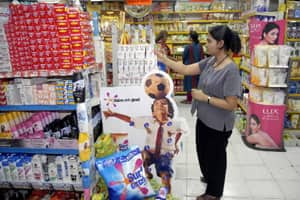 But operating profit margin—a measure of operating efficiency—dropped to 17.91% from 18.05% a year earlier.

Combined revenue of the 42 companies rose 18% in the December quarter, compared with a 21.14% rise a year earlier.

“By and large, in most segments of the fast-moving consumer goods (FMCG) sector, everyone will say that the growth is a little slower than it was say 12 months ago," Manu Anand, chairman, India region, PepsiCo India Holdings Pvt. Ltd, said on the sidelines of a retail and FMCG summit in Mumbai last week.

Anand is also the chairman of the Confederation of Indian Industries, FMCG.

The biggest challenge for consumer goods companies in the past three-four quarters has been managing costs.

“The input cost was shooting up at a much higher level than what we could charge consumers and it was putting a huge amount of margin pressure on most FMCG firms," said Tarun Arora, executive vice-president and head, marketing, Godrej Consumer Products Ltd, the maker of Cinthol soaps and Hit insecticides. But “this is settling down. First, the dollar-rupee equation has stabilized and input costs also are coming around."

But with inflation easing, margins could improve and so could ad budgets, say analysts.

Fewer companies had reduced ad expenditures in the December quarter as compared to the September quarter, according to an Edelweiss Securities Ltd report.

“Price hikes will continue. The entire impact of input costs is not completely worn out and we would take a look at price hikes. You could expect 3-5% rise in prices," said Arora of Godrej.

Despite the troubles, the BSE FMCG index ended Friday at a 64.5% premium to the Sensex PE—the highest among all sectors. The index has outperformed all other sectoral indices in the past year.

Ashwin Ramarathinam contributed to the story.