The rationale behind Idea-Vodafone merger in five charts

The success of the mega merger between Idea Cellular Ltd and Vodafone India Ltd depends largely on synergy benefits that can accrue by combining operations. Not surprisingly, the two companies are factoring in huge gains on this count.

Vodafone and Idea said in a statement that annual savings, both in terms of operating costs as well as capital expenditure, will be around Rs14,000 crore annually by the fourth full year of operations as a combined entity. About two-thirds of this will be on account of savings in operating costs. The net present value of total savings (opex and capex) is estimated at Rs70,000 crore ($10.5 billion).

Opex and capex are short for operating expenditure and capital expenditure, respectively.

While merging companies are typically quite sanguine about synergy benefits, most analysts agree that the Vodafone-Idea merger holds the potential for significant cost savings. With a larger scale and elimination of duplicate costs, margins can rise substantially. However, with the two companies announcing that Vodafone and Idea will exist as separate brands, some analysts are questioning the expected gains from synergies.

Ebitda stands for earnings before interest, tax, depreciation and amortization.

On their own, Vodafone and Idea’s holdings of 3G and 4G spectrum was far lower than that acquired by Airtel and Reliance Jio. This also inhibited their ability to compete effectively, given the shift towards increased data usage by customers. Coming together will enable Idea and Vodafone to operate in the same league, as far as spectrum footprint goes. The combined entity will also be either the largest cellular services operator in prominent circles, or a very strong No. 2. In a couple of circles, it will upstage Bharti Airtel as the number one operator, while in some other ‘A’ and ‘B’ circles, it will graduate to a strong No. 2. It remains to be seen if the combined entity will retain a half-hearted presence in the relatively smaller ‘C’ circles, or whether it will up the ante and aim for a strong pan-India focus.

Vodafone’s Indian escape act is heavy on the contortions

Nevertheless, a stronger market share in the majority of circles will also result in better efficiency. One of the reasons margins are relatively lower at both Idea and Vodafone is that these companies run EBITDA losses in some circles where market share is sub-optimal. The merger will also result in a sharp fall in leverage. Idea and Vodafone expect the net debt/Ebitda for the combined entity to fall from around 4.4 times to around 3 times. This will be aided by asset sales—both companies intend to sell their tower assets and reduce debt. Besides, capex synergies will contain debt to some extent in the future. In addition, opex synergies will result in higher profits. 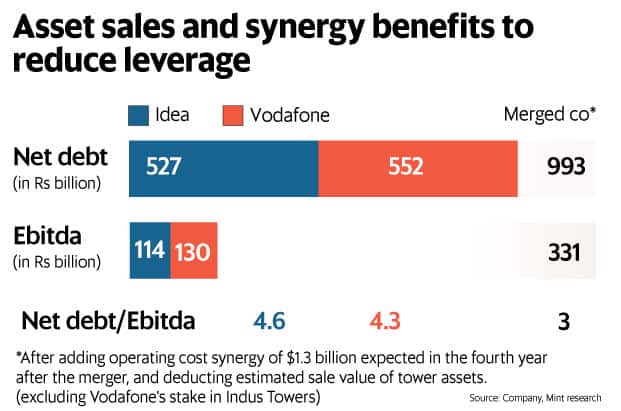 With synergy benefits expected to result in higher profits and leverage expected to reduce, the combined entity’s equity valuation is estimated to soar, as the chart below shows. 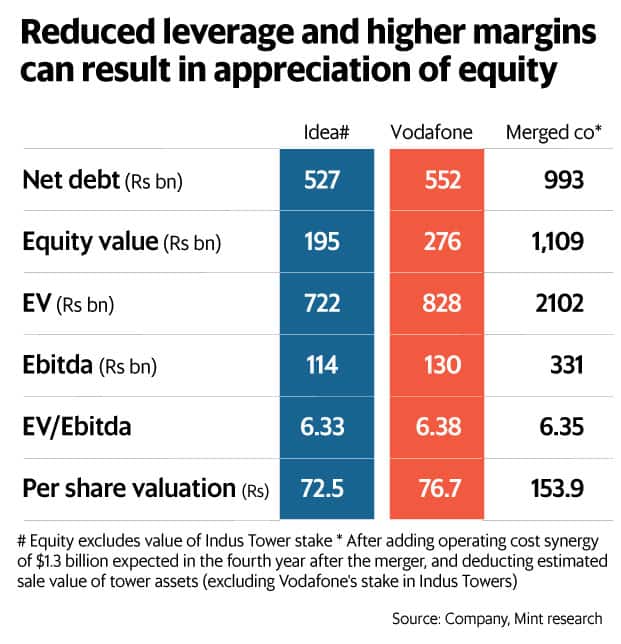 For the deal, the two companies have been valued at around 6.35 times enterprise value/Ebitda. Even if we were to assume similar valuations for the combined entity, the estimated increase in Ebitda itself will result in a huge jump in enterprise value. And with debt expected to reduce, equity shareholders are likely to gain.

Of course, the big caveat in all of these calculations is the usual disclaimer: “all other things remaining the same". Things are not only not expected to remain the same, they are practically changing each passing day, with Reliance Jio making rapid strides in the market. Profitability may well come down substantially for both Airtel and the Vodafone-Idea combine, as tariffs continue to decline and freebies continue to increase. Besides, it’s anybody’s guess where market shares settle a few years from now.

Even so, the fact remains that Vodafone and Idea will be in a far better position together than trying to navigate the gigantic challenges in the telecom market on their own.