Mumbai: Tata Motors Ltd, which sells one out of every two trucks sold in India, is paring production of heavy-duty trucks by as much as 40% in May and June from a year earlier after demand unexpectedly slumped in April, according to four parts suppliers to the company on condition of anonymity.

Sales of the company’s medium- and heavy commercial vehicles plunged 29% in April to 9,829 units from a year earlier.

Tata Motors said it’s a routine cut. “The rate of production at a given point of time is not material, because we keep ourselves flexible. In any case, the industry trend is that every year the April–June quarter is the lowest of the year, since it follows the usually peak period of the January-March quarter," said Debasis Ray, a spokesman for Tata Motors. 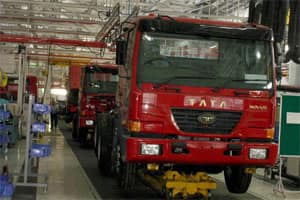 When contacted, Ashok Leyland Ltd and Volvo Eicher Commercial Vehicles Ltd said they had no plans to cut production.

Rajive Saharia, executive director, sales and marketing at Ashok Leyland, the second largest maker of such vehicles, said production is according to schedule. “There is hardly any change from what it was last year."

Vinod Aggarwal, chief executive at Volvo Eicher Commercial Vehicles, also said that production at his firm’s plant was going according to schedule and there was no cut in production.

Nevertheless, the sale of medium and heavy-duty trucks in the cargo segment contracted 18% to 16,190 units in the month of April from a year earlier, according to Society of Indian Automobile Manufacturer Association or Siam. During the month, tractor trailers in the range of 16–40 tonnes used for long haulage witnessed a 24.3-34.6% drop in demand.

The contraction came on back of shrinking industrial output.

India’s factory output contracted in March by 3.5%, thus bringing down the average industrial growth rate for the last fiscal closer to the level of the 2008-09. The Index of Industrial Production (IIP) growth averaged 2.8% in 2011-12 compared with 8.2% in the previous fiscal year. In 2008-09, IIP growth averaged 2.5%. According to transporters, besides weak freight volume and softening rentals, their purchasing power has also been adversely affected by the increase in toll charges across key trunk routes, trebling of third-party insurance charges, increase in the vehicle prices and fear of deregulation of diesel prices. They said even though availability of finance is not an issue, the high cost has indeed been adding to the woes.

Analysts agree. The drop in sales is largely attributable to a 5% drop in truck freight rentals on trunk routes and indiscriminate fleet expansion of high tonnage, multi-axle trucks during the quarter ended 31 March, which was more due to advancement of truck chassis purchases to beat the anticipated increase in excise duty.

In the Union budget excise tax was raised by 5% on truck chassis resulting in an increase of ₹ 60,000-80,000 on different variants, said S.P. Singh, senior fellow at Indian Foundation of Transport Research and Training.

“At a time when the freight market is not very supportive, price hike by commercial vehicle and tyre makers, have not gone down well with the transporters," said Singh, adding that the whole situation is also making the truck financiers jittery of recovery of loans.

Umesh Revankar, managing director of Shriram Transport Finance Co. Ltd (STFC), the country’s largest financier for second-hand trucks, said even though there are no defaults, pressures are mounting. End of March, for instance, STFC’s credit cycle tripled to 45 days. The company had increased the margin money and decreased the loan-to-value ratio.

“There is nothing to worry. We have managed to maintain the quality of the portfolio," said Revankar. The cycle decreased to less than 30 days in the first week of May, he said. STFC charges 15% on new and 20% on finance of old trucks.

“Our bookings from across the country have come down by 20%," said Deepak Sachdeva, president of the Delhi Goods Transport Association. He said the operating costs for transporters have shot up sharply since last month owing to a 20% increase in the toll charges and trebling of the third-party insurance to ₹ 24,000. Moreover, there is a fear among transporters that the government may decontrol diesel, which may escalate the prices by at least ₹ 8-10.