Bengaluru: HCL Technologies Ltd’s warning of a business slowdown in the July-September quarter is worrisome because it raises questions about India’s fourth-largest information technology (IT) firm’s ability to translate its impressive order wins into revenue growth.

HCL issued a warning to the stock exchange on Wednesday of a tepid first quarter. It decided to write down the cost incurred on the work it did for a client and set aside $20 million in the quarter.

Given that the money is about 1.3% of the company’s quarterly revenue, analysts turned fretful. Most analysts had been looking at revenue growth of 3-3.5% in the first quarter; the development means HCL’s revenue is now expected to expand only 1.7-2.2%.

HCL also conceded that adverse currency movements would affect its revenue growth by 80 basis points, thereby further lowering the growth forecast to 0.9-1.4%. One basis point is one-hundredth of a percentage point.

A spokesman for HCL declined to comment for this story, saying: “We cannot comment on anything beyond the information shared in the note to stock exchanges as we are in a silent period." The silent period refers to the run-up to earnings announcements when companies are barred from disclosing potentially stock-sensitive information to the press.

Some analysts said one cryptic line in HCL’s stock exchange note was a particular cause of discomfort. The line read: “Skewness in revenue growth due to transition timelines for complex engagements particularly in infrastructure services".

In simple words, this is the first big challenge ahead of HCL as it possibly implies the company is seeing delays in deals as clients look to move their applications from servers stationed traditionally in their offices to a cloud computing platform.

If this is indeed the case—HCL declined to clarify—it is bothersome because the infrastructure service line accounts for more than 35% of company’s business.

“See, every company has client-specific issues. So we’ll be done with this problem in this quarter and maybe the resulting loss in business from this client may have an impact for the remaining period this fiscal," said a Mumbai-based analyst at a domestic brokerage.

“But what is worrying is that it is not clear what the company means when it says skewness in revenue growth particularly in infrastructure services. This could actually make many revise the growth numbers for 2017," the analyst said on condition of anonymity.

The second wrinkle in HCL’s growth story over the last three years has been the company’s inability to build long-term client engagement.

This underlines what certain industry executives and analysts have feared: HCL’s desire to win new deals by quoting low rates is leading to execution problems and eventually making clients end their engagement with it.

“The numbers say it all... the company is losing clients even though the management continues to focus more on getting more, bigger clients every quarter," said a Mumbai-based analyst at a foreign brokerage who declined to be named.

HCL’s new deal wins do not seem to be translating into revenue.

HCL had revenue of $1.9 billion at the end of June 2008. Over the next four years, it managed to more than double its revenue to $4.1 billion by end of June 2012. During these 48 months, the company won $8 billion worth of new deals. Since each of the outsourcing deals are long-term contracts, business from new clients is typically only 3-4% of revenue in the first year and about 12-15% in three-four years, according to JPMorgan Chase and Co. analyst Viju George.

On 17 October 2012, in a post-earnings investor conference call, the then CEO Vineet Nayar said: “And we have already told you that if we win a billion dollars in a quarter, we will announce it and that was not the case this quarter". 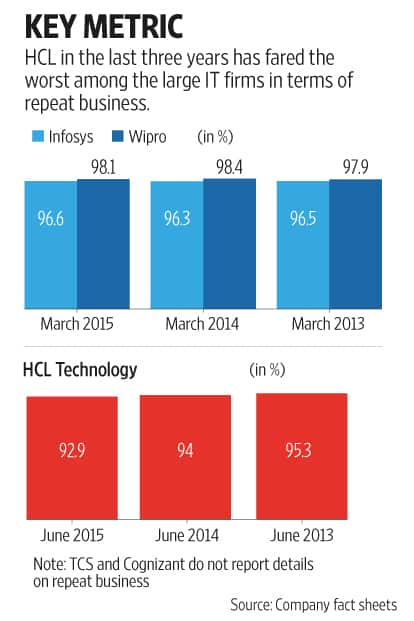 So until July-September quarter of 2012, HCL had not bagged deals worth $1 billion in a financial quarter.

Three months later, on 17 January 2013, Anant Gupta, who was addressing analysts for the first time since he took over as CEO, said: “I think we had a good booking quarter of about 1 billion dollars".

Beginning October-December period of 2012 and until April-June of 2015, HCL has consistently told analysts in each of the 11 quarters that it has won over a $1 billion deal, transcripts of which were reviewed by Mint.

To be sure, since every IT company define “order bookings" and “deals a company wins" differently, analysts remained divided on the deal wins of HCL. But soon, HCL management even clarified that order bookings in a quarter is the same as total contract value of deals it wins.

“We have booked 15 large transformational engagements in this specific quarter which translated to over a billion dollars of our total contract values so the booking profile continues," said Gupta in an analyst interaction on 30 January. “I think the first fact is that from a $2-billion book per annum we have consistently moved to great than a billion dollar book a quarter"

One reason behind this mismatch is HCL losing existing clients at a faster clip than it is generating incremental revenues and is best described by George of JPMorgan as “leaking bucket" theory.

“Of late, it has become fashionable to talk qualitatively of order books and TCV (Total Contract Value). While that will no doubt help in bringing more water to the bucket, what if the bucket itself is springing leaks that cause the already stored water to deplete? Leakages in the existing book of business are a bigger concern as that is likely to negate gains from newer larger deal wins," George wrote in an investor note dated 27 April this year.