The company, a 50:50 joint venture between Italian automaker Fiat SpA and Tata Motors Ltd, is readying to launch the Grande Punto, a compact car, in the third quarter of the fiscal year. The second model will be Tata Motors’ new three-box offering, code-named X1.

Together with the Linea, the products would be instrumental in steering the joint venture into profitability, said Kapoor, adding that the planned launch of the Fiat Bravo was being delayed because of the economic slowdown. 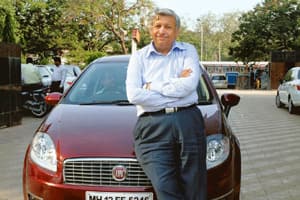 The Ranjangaon unit, which has the capacity to make 160,000 cars and 300,000 engines, is producing the Fiat Palio, Stile and Linea models and select Tata Indica models. The X1, which would compete with Maruti Suzuki India Ltd’s Dzire, would be the first so-called new generation car from Tata Motors that would be manufactured in the facility.

Sales volumes would be pivotal for the success of the venture.

“Though the success of the new models from Tata Motors would depend on the powertrain (engine) options that are offered and other factors, going by the good past record of the Indigo, if the trend continues with the newer volumes, the target is achievable," Bandhu said.

He is, however, cautious on the Grande Punto’s prospects. “None of the bigger hatchbacks—be it the Skoda Fabia or the Hyundai i20 that are priced in the Rs5-7 lakh range—has been too much of a success in the Indian market," he said, adding that pricing will be key to the success of the car.

The compact car, or hatchback, segment, which made up more than 75% of the 1.2 million cars sold in India in fiscal 2009, may see many more launches in the coming months, among them the Maruti Suzuki Ritz and Honda Jazz.

“Typically a JV (joint venture) of this magnitude takes four to five years to break even," said Mahantesh Sabarad, an auto analyst with Centrum Broking Pvt. Ltd. He, however, added that just two to three products would not help; Fiat needs multiple offerings across segments.

Fiat’s Ranjangaon manufacturing facility is benchmarked against the global car manufacturer’s units in Turkey and Brazil. Kapoor says it compares well as the lowest-cost manufacturer, and Fiat will eventually source right-hand drive Linea cars from here for the UK and Australia.

“We have a cost advantage of 14-17% over Brazil and Turkey due to localisation of parts and labour costs," he said.

Fiat sold 4,600 units of the Linea in January-March. While saying his firm was not surprised by the response, Kapoor admitted that it was confounded by the demand for the top-end variant of the car which accounted for almost 80% of total sales. However he expects the ratio to dip to 25% once demand stabilizes.

Sabarad of Centrum attributes the initial success of the Linea to Fiat’s strategy of pricing and styling. “The company decided to deliberately have a predatory pricing strategy for its new model," he said. “To my mind the price will keep moving up; getting the same volume then would not be possible."

Fiat has been known in India more for the Premier Padmini, based on the Fiat 1100, that the Doshis of Premier Automobiles Ltd manufactured for four decades starting in the 1950s. In Mumbai, black-and-yellow Premier Padminis are still the most popular taxis.

Fiat, which has had a chequered history in India, had almost decided to quit the market but for Fiat chief executive officer Sergio Marchionne and Tata group chairman Ratan Tata coming together in 2005, Kapoor said.

“Such was the level of confidence among both the partners that investments began at least two years before even a formal agreement was signed," he said.