Why Indian tech CEOs are worried about productivity

The plans of the TCS, Infosys and Wipro CEOs all boil down to productivity in the IT sector. Here are five charts that explain why they want to do something about it

Infosys chief executive officer (CEO) Vishal Sikka wants to use automation and innovation to increase revenue per employee by 50% to $80,000 by 2020. Wipro CEO T.K. Kurien has reportedly said he wants to reduce headcount by 30% in the next three years. Tata Consultancy Services (TCS) CEO N. Chandrasekaran has long been saying that his firm wants 10% of its incremental revenues to come from non-linear initiatives, which are less dependent on people for revenues. All of these boil down to productivity in the information technology (IT) sector. Here are five charts that explain why they want to do something about it.

While IT services revenue (export and domestic) has grown consistently over the last few years, revenue per employee has remained stagnant. If the industry continues to grow at about 12% a year (as it did in the last few years), if TCS, Infosys and Wipro can match that growth (as they aim to), and if their revenue per employee remain at the same level (the average of last seven years), then the combined headcount of TCS, Infosys and Wipro in 2020, of 1.25 million, will exceed the 1.24 million employed by the entire IT sector in 2007. 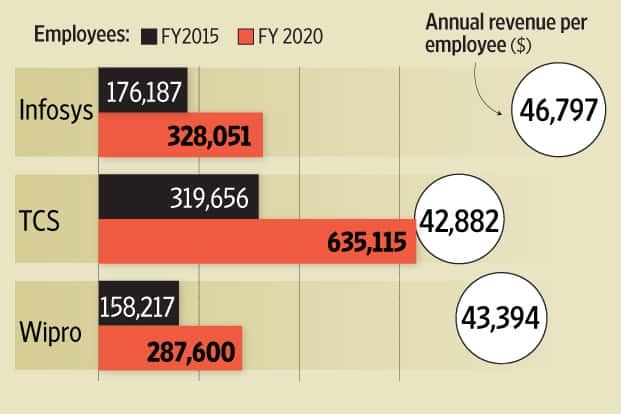 Managing such a large number of people is likely to put enormous stress on management, and would demand a different talent management strategy. Take employee utilization rates. IT companies tend to keep a percentage of their employees on the bench to cater to projects in the pipeline. If TCS, Infosys and Wipro maintain their present utilization rates (average of the last 25 quarters), each will have bench strength greater than their headcount in 2007. Put another way, the nominal revenue loss would be greater than their annual revenues in 2007. While one can argue that the utilization problem can be solved by shifting to an absolute number, rather than a percentage of employees, the scale of hiring will be a challenge. Assuming the attrition rate will be around the average of the last seven years, Infosys, TCS and Wipro would have to collectively hire close to a million. If the percentage of “unemployable" candidates is to be believed, it would be difficult, if not impossible, to get those numbers.

There is an increasing awareness that investors know this. They are valuing IT companies less than they did a few years ago. 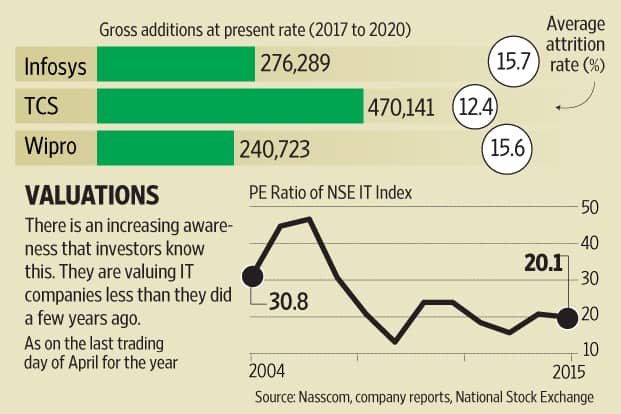 howindialives.com is a Delhi-based start-up that is developing a search engine for public data to make it more accessible to decision-makers