Mumbai: As top Indian pharmaceutical companies sell themselves off, India’s Rs60,000 crore drug market seems harking back to the 1970s, when it was dominated by foreign multinationals.

Just six of India’s top 10 drug makers by market share are controlled by domestic promoters today, down from nine in December 2008. 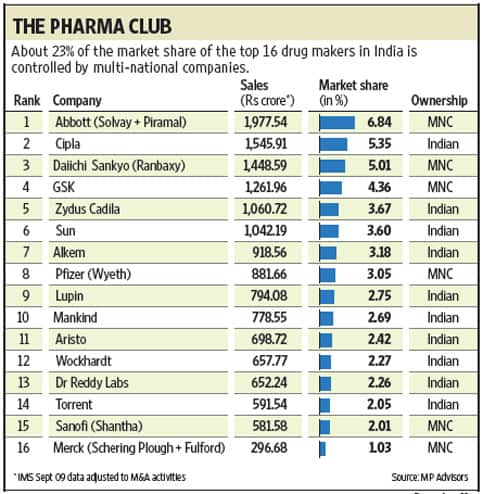 His firm advised Japan’s third larget drug maker, Daiichi Sankyo Co. Ltd in acquiring the stake owned by promoters in India’s largest drug maker, Ranbaxy Laboratories Ltd. The $4.6 billion (Rs21,620 crore) acquisition was the first of the three deals that have changed the equations in the Indian drug industry since December 2008.

It was followed by Hyderabad-based Shantha Biotechnics Pvt. Ltd’s acquisition by Sanofi-Aventis AG.

Last week, US drugs and nutrition company Abbott Laboratories announced a Rs17,000 crore acquisition of the domestic formulation business of Mumbai-based drug maker Piramal Healthcare Ltd, the largest player in the local market with a market share of 7%.

Global acquisitions have also changed the structure of the Indian market. The acquisition of US multinational Wyeth by the world’s largest drug maker Pfizer Inc. has led sales of their Indian subsidiary Pfizer Ltd to increase. The combine of Pfizer and Wyeth in India has now become the eighth largest player with a market share of 3.5%.

And US drug maker Merck and Co. Inc.’s acquisition of Schering Plough worldwide has made the company the 10th largest in India, with a market share of 1.03%, according to retail market statistics of IMS Health until September 2009.

The combined share of top 16 drug makers in the local market is 56%, or worth Rs33,600 crore, according to retail audit data compiled by IMS Health.

Since new acquisitions and mergers have changed the ownership base in the industry, 23% of this market is now controlled by six multinational companies.

Until December 2008, British drug maker GlaxoSmithKline Plc-promoted GlaxoSmithKline Pharmaceuticals Ltd was the only foreign firm in the top 10, with about 4% market share in the Indian drug market till 2008.

“Till the end of 2008, there were nine companies owned by Indian entrepreneurs out of top 10 with a combined market share of 32.67%. But the new constitution is that top 10 command 41.06% of total market , and four of the them are MNCs (multi-national companies)," said Shah of MP Advisors.

“With multinationals’ interest to grow in this market and Indian entrepreneurs’ willingness to encash, there could be more acqusitions happening, which will lead to MNCs increasing their market share in the domestic market," he said.