Mumbai: Power does not flow from executive titles. Nita Ambani would know it best.

She’s married to the richest Indian who heads the country’s largest private sector firm, but Ambani does not hold any executive responsibility at Reliance Industries Ltd (RIL). Yet, her influence extends far beyond Maker Chambers, the Fortune 500 firm’s Mumbai headquarters.

Affirmation came on Thursday, when business publication Forbes named her among the most powerful businesswomen in Asia.

A Forbes article accompanying the power list called her the “power near the throne" at RIL, and also referred to her photo in the RIL desk calendar alongside that of chairman and managing director Mukesh Ambani. 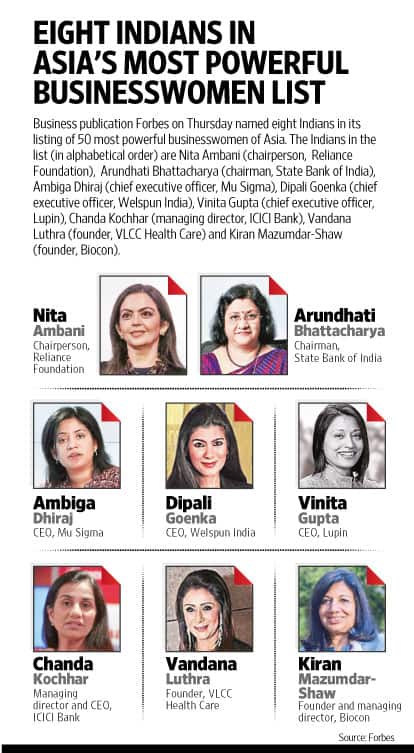 In the last few years Nita Ambani, 52, has figured prominently in many things at RIL. Named to the firm’s board in 2014, she heads the Reliance Foundation and its ventures in education and sports.

“In a country where billionaire wives tend to remain in the shadow of their husbands, Nita’s rising profile in the Reliance empire is unusual and earns her a debut spot," Forbes said.

She never intended to stay in the shadows.

According to the Forbes report accompanying the power list, the commerce graduate from Mumbai’s Narsee Monjee College of Commerce and Economics told her husband early enough that “I didn’t want to be just an ornament."

After her marriage in 1985, she took a diploma in special education and worked as a teacher for several years, a move that would prepare her for the Dhirubhai Ambani International School that she would start in 2003.

In 2008, RIL spent $112 million for a cricket team in the Indian Premier League.

It signed on Sachin Tendulkar for its Mumbai Indians franchise.

Over time, Nita Ambani would become as much the face of the Mumbai Indians team as Tendulkar.

Forbes says it was her husband, estimated to command a wealth of close to $19.3 billion, who got her involved after the team floundered in the first two seasons: “I resisted initially as I didn’t know much about the game," she admitted to the magazine.

After cricket, the Ambanis ventured into another ambitious project: corporate social responsibility (CSR).

Reliance Foundation was set up in 2010 with Nita Ambani at its head.

Money was not a constraint for the foundation’s initiatives on health, education, rural transformation, and development of the arts and culture. RIL was the largest spender on CSR in FY15: Reliance Foundation spent ₹ 761 crore.

Ambani joined the RIL board in 2014 after the Companies Act of 2013 mandated every company to have at least one woman director.

Her role in the company expanded, and she was put in charge of the branding and marketing strategy of the 4G phone service of the telecom arm, Reliance Jio Infocomm.

Ambani is known to have a keen eye for detail.

At the group’s newly set-up charitable hospital, Sir HN Reliance Foundation Hospital and Research Centre, she decided on everything from the menu for patients to the colour of curtains.

An RIL entity publishes Forbes India under a licence agreement.

This story has been corrected to reflect a clarification by Forbes that its list, Asia’s 50 Power Businesswomen 2016, had been compiled in alphabetical order and did not represent rankings.