Mumbai: Diwali sales and new launches spurred auto sales in October, prompting some analysts to brush aside worries that a likely rollback in government incentives would dent the momentum.

Experts say the impact of a withdrawal of excise duty cuts and a hike in interest rates on auto loans would be negligible as car and two-wheeler makers are grappling to cope with increasing demand even while operating at optimal capacity.

About 60-70% of the cars and half the two-wheelers sold in India are financed. The country is Asia’s third largest auto market. Model show: A Bajaj Auto showroom in Faridabad. The company’s sales, including exports, went up 51% to 249,474 units in October. Rajkumar/Mint

This year, Maruti’s October sales increased 21% over a year ago to 71,551 units, led by its sedans, SX4 and Dzire, sales of which grew 63% in the domestic market, according to data the firm released on Monday.

Hyundai Motor India Ltd, the country’s second largest car maker by sales, sold 47,407 units in October, up 41%, riding demand for its hatchbacks, Santro, i10 and i20.

Car sales have rebounded this year boosted by increasing consumer confidence on signs of a revival in the economy as well as pent up demand from last year, analysts said. The numbers were also propped up by the lower base of last October and rural demand, though it doesn’t account for a large share of auto sales.

However, Abdul Majeed, a partner at auditing and consulting firm Price Waterhouse, says auto makers may not be able to sustain the run if the existing enablers are changed. “The momentum in the months after December will depend on the interest rates, demand from the rural pockets, inflation and sustenance of the fiscal stimulus package," he said.

Tata Motors, along with its joint venture Fiat India Automobiles Ltd, sold 22,232 cars in October, a 28% rise over a year ago. 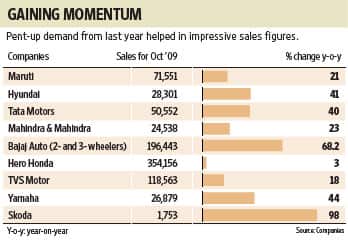 As for two-wheeler makers, Hero Honda Motors Ltd, which sells two of every three bikes sold in the country, said its October sales rose only by 3% to 354,156 units, held back by a temporary shutdown of its plant in Haryana during the state election.

For Pune-based Bajaj Auto Ltd, which has gradually gained some of the ground it had lost to rivals, sales including exports went up 51% to 249,474 units in October.

This was mainly on the back of its Pulsar and Discover models, which account for two of every three bikes the company sells.

George of BNP Paribas attributes the higher two-wheeler sales to the pent-up demand of the last two years. Domestic two-wheeler sales had begun slowing from the early 2007 when several leading financiers pulled out of the market.

Among other car makers, Honda Siel posted a record sales of 6,909 units in October, a 346% rise over a year earlier when sales of its City model had slumped while being replaced with a new variant. General Motors India Pvt. Ltd too saw its October sales increase 15% to 7,413 units over a year ago.