Bengaluru: Infosys Ltd’s then chief financial officer Rajiv Bansal walked out of a 15 February 2015 meeting where board members of the software services company were asked to approve a proposal to buy Israeli automation technology firm Panaya Ltd, a person close to Bansal said.

It was about 30 minutes into the meeting when the proposal was put to the board. Bansal excused himself from the vote, stood up and walked out, this person said. Board members watched in disbelief.

Bansal, who was not a board member but attended the meeting in his capacity as the CFO, believed that the Panaya acquisition was ill-thought-out and would not offer much by way of value to Infosys, the person said on condition of anonymity. He thought the company was paying too much money and was also upset that as CFO, he had not been kept in the loop during the due diligence process, the person said.

Even so, his reservations did not deter Infosys from eventually agreeing to pay $200 million to buy Panaya; Bansal eventually came around to accepting the decision by Sikka and the board. Two years later, the jury is still out on Infosys’s second-largest acquisition. Over the last month, fresh questions have surfaced over the rationale behind the purchase.

Bansal’s reservations did not deter Infosys from eventually agreeing to pay $200 million to buy Panaya; he eventually came around to accepting the decision

An email purportedly written by an anonymous whistle-blower, dated 19 February, and sent to this newspaper and copied to senior executives of the Securities and Exchange Board of India (Sebi), questioned why Infosys paid $200 million in February 2015 for Panaya when, in the previous month, the company had been valued at $162 million by Israel Growth Partners, which made a $20 million investment to pick up a 12.31% stake. 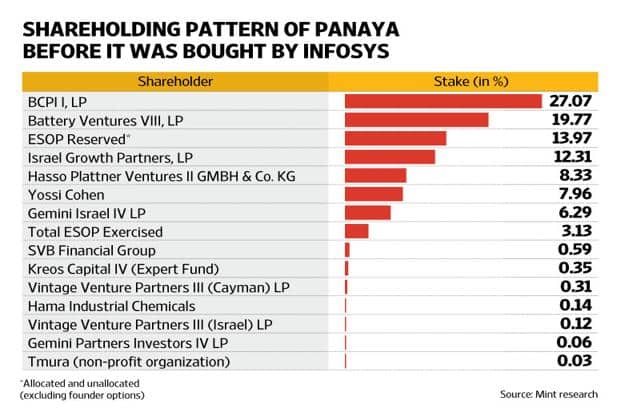 “The Board of Infosys blindly approved the deal," the email said. “The CFO of Infosys at that point of time, Rajiv Bansal, refused to sign off on the deal and, in fact, walked out of the discussion during the board meeting to approve this deal".

Infosys named Jake Klein, a member of its corporate venture arm, as the new CEO of Panaya in December last year.

Firstly, Bansal did excuse himself from the board discussion on Panaya.

Mint could not confirm if Bansal’s objections to Panaya and another investment made through the company’s $500 million corporate venture arm were the reasons for him being asked to leave Infosys. Bansal also objected to Infosys investing $2 million in Airviz, a personal air-quality monitoring start-up from Carnegie Mellon University, according to the person cited earlier.

Bansal left Infosys in October 2015, with the company only disclosing in June 2016 of a Rs17.38 crore severance payment offered to him. Infosys halted further instalments from the severance package after having paid Rs5.2 crore following objections by some of the company’s founders.

Secondly, Infosys has publicly disclosed that SAP’s co-founder Hasso Plattner held about a 6% stake in Panaya. Sikka was a member of SAP’s executive board before he joined Infosys.

According to the whistle-blower’s email and the shareholding pattern in Panaya independently accessed by Mint, Plattner held an 8.33% stake. The email states that the Panaya acquisition made Plattner richer by $17 million.

The email states that Panaya shareholders took out $20 million from the company, leaving Infosys to make a $20 million investment in working capital for Panaya, and eventually spending a higher amount in buying the company. This is reflected in Infosys’s profit and loss statement, which pegs the acquisition cost of Panaya at $225 million.

The person close to Bansal cited above claimed that Infosys in December 2014, four months after Sikka took charge, replaced Deepak Padaki with Ritika Suri as the head of mergers and acquisitions.

Suri, a former colleague of Sikka’s at SAP, was also given the additional mandate of overseeing Infosys’s $500 million innovation fund, and was to report to Sikka, unlike in the past, where the head of mergers and acquisitions reported to the head of finance.

In July last year, Padaki was asked to return to head mergers and acquisitions even as Suri was asked to head the large deals team at Infosys.

“The company takes any whistle-blower complaint seriously and there is due process to investigate any complaint that comes to us," said a spokeswoman for Infosys. “If we do receive any query either directly or from the regulator, we will respond to it as per the due process."

In an email sent on Sunday night after this report was filed, the spokeswoman said: “With regard to Panaya’s acquisition, a third-party valuation was done by Deutsche Bank, and the price at which the company was acquired was within the band recommended by them."

On some other charges of conflict of interest in making the acquisition raised in the purported whistle-blower’s email, the spokeswoman said: “We categorically deny and refute these allegations. The insinuations being made are false, malicious and defamatory."

Varun Sood is a business journalist writing on corporate affairs for the last fifteen years. He also writes a weekly newsletter, TWICH+ on the largest technology services companies. He is based in Bangalore. Varun's first book, Azim Premji: The Man Beyond the Billions, was brought out by HarperCollins in October 2020.
Read more from this author
Catch all the Corporate news and Updates on Live Mint. Download The Mint News App to get Daily Market Updates & Live Business News.
More Less
Topics
mint-india-wire
OPEN IN APP