Naresh Fernandes | Passion for Mumbai makes him take time out, go beyond the glitzy world

Naresh Fernandes | Passion for Mumbai makes him take time out, go beyond the glitzy world

Naresh Fernandes walks around the square conference room that overlooks Mahalaxmi Racecourse. The walls are filled with all the covers of three years of Time Out Mumbai magazine. He points out his favourite issues, and one has a cover photo depicting two 70-year-old men in Gandhian attire driving a motorcycle. 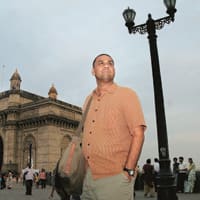 Wide perspective: Time Out Mumbai editor Naresh Fernandes says: ‘I think it would be a dishonest magazine if we only talked about the glitz.’

“This was about Bombay’s role in the freedom struggle," he says. This is one of the few cover stories he wrote alone. “I wanted to remind people that this city has a long history of being involved with struggle to make things better. That great cities become great cities because of the involvement of citizens."

Fernandes continues around the room, highlighting cover stories about night life, restaurants, festivals and wine in one breath, and then communal tensions after the 2006 bomb blasts and infrastructure problems after the 2005 floods in the next breath. As editor of Time Out Mumbai, Fernandes’ job has clearly been a balancing act. Time Out is an international brand with magazines in 35 cities from Argentina to China, and travel guides for almost 55 destinations. In London, it calls itself the city’s listings authority. In New York, Time Out is a major city arts and entertainment magazine.

When Fernandes was hired in June 2004 by publisher Smiti Ruia of Paprika Media Pvt. Ltd, which is a content partner for Mint, he knew that he had the challenge of being true to this international entertainment brand and true to his city.

“I think it would be a dishonest magazine if we only talked about the glitz," says the 38-year-old. “Time Outs around the world believe that they care for their cities and you couldn’t care for Bombay unless you recognized that more people live in slums than live in formal housing. And that culture is not only the domain of the elite."

And, since its launch, Time Out Mumbai has become a home for the city’s culture to gather.

Before 10 September 2004, there were events with no place to go, no central place to be listed for all to see. Now there are dozens of pages every fortnight about events in dance, theatre, music, film, food and night life. In some senses, this was enough of an accomplishment. But Fernandes wanted more. He made it his mission to include a range of the city’s life and social issues to whatever extent possible, when the magazine could have focused easily on just bars and clubs, socialites and Bollywood.

Time Out opened up the city, giving Mumbaikers new perspectives and sub-cultures to be aware of and explore.

“I think there are forces at play to homogenize the city," he says. “The little things that make the city unique, that is what we look out for."

The kind of editor Fernandes has been at Time Out has its roots in his first job at The Times of India, starting in May 1990. Although he was a cub reporter there, he was thrown into covering the Mumbai riots, then the bomb blasts and then an earthquake in rural Maharashtra’s Latur. “It left a huge impression on how I have conducted journalism ever since," he says. “It was quite awe-inspiring for someone at the beginning of their career to see how public opinion works and the role that the press plays in influencing that opinion."

For the next 13 years, he worked across publications, jobs, formats and continents. He did a stint as a broadcast reporter and says he “could not remember the lines to say to the camera". He worked a year as the only Mumbai correspondent for the international news wire, Associated Press, when it opened its first India office outside Delhi. He spent five years in New York, sitting on the other side of the desk, editing news stories from overseas staff of The Wall Street Journal, paying the loans he took attending Columbia University Graduate School of Journalism. And then he came back to The Times of India to supervise the city desk, but he “realized things had become different". And so he left, again, and did other projects such as volunteering at the World Social Forum.

Around that time, Fernandes wrote an article for the pilot issue of Time Out to be sent to the international headquarters in London as part of the pitch to get the licence. Divia Thani Daswani, who was helping publisher Ruia at the time, says: “The minute we read the piece we knew we had found the editor."

Ruia met him for the first time at the first Bandra festival, watching a jazz performance at the Lands End Amphitheatre. This was a good place to strike a chord with Fernandes—a jazz enthusiast who has become known for stories he wrote on the jazz influences in mid-19th century Bollywood music. His work has inspired many, including Ramu Ramanathan who used Fernandes’ research as the basis of a play to come in November. Ruia, who was 24 at the time she decided to launch Time Out in India, says, “I think he came on board because we connected in our passion of Mumbai and our love for it."

Fernandes has been ever beguiled by the culture and dynamics of mega cities. “Bombay has delights and problems, and I don’t think they exist on this scale anywhere else in the world", says Fernandes who owns 80 or 90 books on this city. The Mumbaiker says that from an early age he understood the two faces of the city’s citizens: “nativism and the struggle of the immigrant". His mother’s family is East Indian, and his grandfather used to be a farmer on the edge of Pali Hill in Mumbai suburb Bandra—the area where Fernandes still lives. His father’s family was immigrants by way of Karachi. “I feel rooted here," he says. “It is comforting to know that I will go into the same hole that five generations of my family lay in (at) St Andrews church yard."

And Fernandes looks after his birthplace not just through words. During August he signed a letter to the government asking that it implement the recommendations of the report of Justice B.N. Srikrishna on the 1992-1993 Mumbai riots, and helped organize a public meeting.

His job and reputation have made him the resident expert on Mumbai. “We seem to have gotten into the BBC database," he says. “If there is a bomb blast or a flood, our phone is ringing off the hook."

He often appears on television news roundtables, and swapped stories with friend Suketu Mehta during his writing of Maximum City: Bombay Lost and Found. And Mint’s Friday Planner in Business of Life pages is provided by Time Out.

While his job can periodically keep him indoors from the happenings of Mumbai (he edits every word of every Time Out magazine himself), Fernandes ensures that he and his team are “swarming around the city with their eyes wide open" most of the time. “So, as my very large midriff makes clear, I do some of the restaurant reviews," he says.

One of his favourite Time Out pieces was on the city’s Irani sweet shop in central Mumbai’s Dongri area; the shop is open for one week in March before the Irani New Year. When he went to visit after the piece was out, Fernandes says, “Bang on cue, two American tourists landed up with a couple of Time Out (magazines) in the middle of Dongri where you never see tourists."

Another traveller and Mumbai-resident Arun Kumar says he picks up Time Out right after disembarking from the plane anywhere he goes. And in his own city, the lawyer and entrepreneur reads every issue for the reviews on food, theatre and music, and goes to at least two events a fortnight. Whether readers agree or disagree with the reviews, which they note often bash the mainstream Bollywood movies and music, most say they go to Time Out when they have free time to fill and want an infusion of the international scene.

Leonie Le Maistre, a 31-year-old from Scotland who has taught at Mumbai’s suburban Tridha School since 2005, says, “If I don’t get each edition, I feel I am going to miss something." She recently ventured out by herself to see Danny Bhoy, a Scottish-Indian stand-up comedian.

In order for events such as these to be listed, Fernandes has the section editors make between 60 and 100 calls each to ensure listings are comprehensive and accurate. The staff take turns working on the cover story and stories about their section, be it music or art, after story ideas are long debated. He tells his team to use events to highlight aspects of the city and “interpret the changes of Bombay through the prism of a fortnight."

He wants Time Out to bring out the city’s subcultures and its “cultural collective memory" in a fight against “the global forces that homogenize the city". As his friend and co-editor of Bombay, Meri Jaan Jerry Pinto says, “Time Out has a piece that told us where Babu Genu was martyred. I don’t think anyone else would care about Babu Genu." Pinto adds, “Where else do documentary films get reviewed?"

And Fernandes ensures that the reviews of all kinds are independent (as does the Time Out Group Ltd), paying for meals and looking at conflicts of interest.

“Among the earliest discussions I had with Smiti, was she wanted to know why I left The Times of India," he says. “Lines had been blurred."

Fernandes wanted clear editorial independence, and she supported that from the beginning.

Fernandes also ensures that the magazine stays relevant. On 14 July 2006, they were supposed to have Naseeruddin Shah on the cover, and had to put the story inside at the last minute, when that flood happened. After bringing the Rs30 Mumbai magazine to a 60,000 print run and an estimated readership of 360,000 (figures from Paprika Media), Fernandes now has new projects to also grow: a six-month-old Delhi edition and a Bangalore edition to launch early next year.

Tony Elliott, founder and chairman of Time Out Group, says, “Let me say this, I would be worried if Naresh were leaving."

Fernandes seems set to stay, noting that no other magazine would allow him to indulge in all his obsessions.

Sixty in Sixty is a special series that we are running through 2007, the 60th anniversary of India’s independence. We will introduce you to sixty Indians—both here and abroad—who are not rich or famous. These are people who are making quiet, but important, contributions without seeking headlines, to help make India and, in some cases, the world a better place. We also welcome your suggestions on people whom you think should be profiled in this series. Please send your suggestions by email to interview@livemint.com