Flipkart's talks with Swiggy, UrbanClap and UrbanLadder are seen as an attempt to widen its slender lead over Amazon India and diversify its e-commerce business

Bengaluru: Armed with over $4 billion in cash, India’s most valuable start-up Flipkart Ltd is planning more start-up investments and acquisitions as it seeks to widen its slender lead over Amazon India and diversify its business.

Flipkart has held talks to invest in food-delivery app Swiggy, services firm UrbanClap, furniture retailer UrbanLadder and some start-ups in insurance and wealth management, said three people familiar with the matter, speaking on condition of anonymity.

Mint had reported on 15 October that Flipkart was in talks to buy a large minority stake in Bookmyshow in a deal that may value the ticketing platform at $500-700 million.

The talks with the companies mentioned above haven’t yet materialized into deals.

Flipkart’s merger and acquisition (M&A) approach marks a shift from its strategy of 2014-15, when it sought to build a venture capital-like portfolio by investing prolifically. In those two years, Flipkart invested in or bought more than a dozen companies, including fashion retailer Myntra, trucking marketplace Blackbuck and advertising tech start-up AdIquity. Many of these were financial investments rather than deals that would boost the company’s business.

Now, Flipkart is only seeking large, strategic deals that will directly help its business, the three people cited above said, requesting anonymity. 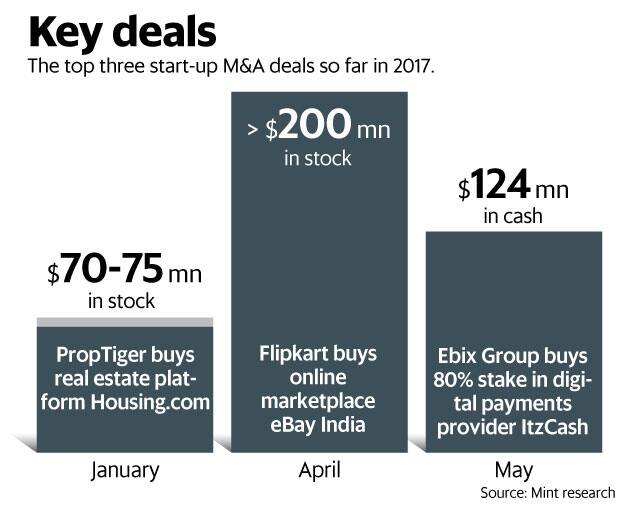 Recent regulatory filings also confirm the shift in Flipkart’s approach towards mergers and acquisitions. According to filings with the corporate affairs ministry in September, Flipkart increased its reserves for financing acquisitions and significant investments to roughly Rs8,000 crore (over $1.2 billion) from earlier levels of Rs3,000 crore.

This year, Flipkart has raised nearly $3 billion in fresh capital from SoftBank Group Corp., Tencent Holdings, eBay Inc. and Microsoft Corp. In August, Flipkart said it has more than $4 billion in cash.

Flipkart is India’s most acquisitive internet firm. Since starting out in 2007, it has bought or invested in over 20 companies. Its largest acquisition was that of Myntra for more than $330 million in May 2014. Earlier this year, Flipkart also tried to buy struggling smaller rival Snapdeal (Jasper Infotech Pvt. Ltd) for nearly $1 billion in stock but the deal collapsed in August because of differences over valuation and deal structure, among other things.

Flipkart is battling Amazon for supremacy in India’s $15 billion e-commerce market, which has seen a sharp slowdown in growth since the start of 2016.

Given this slowdown, Flipkart should seek deals to boost sales, analysts say. The company’s payments platform PhonePe is locked in a fight with another SoftBank-backed firm, Paytm, and Amazon Pay in the fast-growing consumer payments business.

Flipkart is also expanding into newer businesses. The company is working on offering insurance and wealth management products. To launch this business, it has considered buying a stake in fintech start-ups, the people cited above said.

“Flipkart’s new M&A approach is similar to what the large Chinese internet companies and ventures have done in China over much of the past decade—buy out smaller rivals and pick up strategic stakes in other large internet start-ups. Flipkart is trying to do two things—firstly, they are ensuring that they reach a size and scale from which they can’t be toppled by even deep-pocketed rivals such as Amazon. Secondly, they are essentially not missing the bus and protecting themselves from disruption," said one of the people cited earlier.