The city of San Diego, California, is named after Didacus of Alcalá. Better known as San Diego de Alcalá, the Catholic saint was born near Seville in 1400 and died around 63 years later in the central Spanish city of Alcalá de Henares. Known in his lifetime for curing the sick, the veneration of San Diego really began with his death when, it is reported, his body remained incorrupt, did not go into rigor mortis, and emanated a sweet perfume. 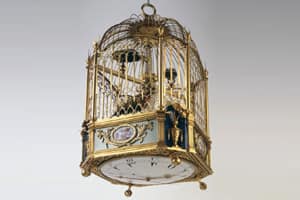 Twitter time: One of Jaquet-Droz’ signature smaller automata featuring moving and singing birds inside a cage, with a clock fit into the bottom. Photo credit: Jaquet-Droz But there was more. Legend has it that a desperate Philip, kneeling by the side of his son’s bed, made a promise to god. In return for a miracle, the saving of his son’s life, Philip promised to perform a miracle himself. (Remember that at the time the Spanish king was perhaps the most powerful man on the planet. If there was any mortal capable of a miracle, it was the Spanish monarch.) While the story of promise maybe apocryphal, what Philip did next is well documented. When his son was healed, Philip immediately summoned from the city of Toledo master clockmaker and engineer Juanelo Turriano. It was up to Turriano to perform the miracle for Philip: a reincarnation of the Franciscan saint. Not in flesh and blood, but in wood, metal and cloth. Turriano would create what has been called the Clockwork Monk. It is an example of perhaps the closest thing pre-industrial man came to a high-tech gadget: the automaton. In the case of Philip’s Clockwork Monk, the 15-inch model of San Diego, wound with a key, moved in a large square shape while striking his chest with one hand, and raising and lowering a cross with the other. His head moved, eyes rolled and his mouth opened and closed in silent prayer. Occasionally, the arm would lift and the monk kissed the cross. The Monk is currently part of the Smithsonian Institution’s collection but there is a YouTube video, commissioned by the Smithsonian, which shows it in action. There is something utterly captivating and deeply disturbing about that video. Perhaps it is because, unlike most other automatons made in that period, the Clockwork Monk was made not for amusement but for divine appeasement. The face of the monk is grim, the actions intense, the impact disconcerting.

It is no wonder that this explosion of mechanical innovation coincided with the Renaissance, a period that saw Europe bloom with a somewhat secular fervor for science and investigation. Soon, workmen all over the continent were making hugely expensive automatons for European courts. The rich and powerful showed off elaborate, often remarkably lifelike automata, in much the same way that wealthy people today flaunt their cars, gadgets and their wine cellars.

By the 18th century automata makers had refined their art to a mind-boggling degree.

One of the later masters of the ultra-complicated automata, and supplier of wonders to the rich and famous, was Pierre Jaquet-Droz. Born in 1721 on a small farm in La Chaux-de-Fonds, one of the cradles of Swiss watchmaking, Jaquet-Droz learnt clockmaking and mechanical design from relatives who belonged to one of several local watchmaking families. After a personal tragedy— Jaquet-Droz’s wife and one of his children died in 1755—Jaquet-Droz decided to devote the rest of his life to work. The trajectory of his professional life changed in 1758, when he was finally able to present his clocks to an astounded Spanish court that paid him handsomely for his pieces. Then, flush with funds, and having tasted noble patronage, Jaquet-Droz went back to Switzerland and began working on the watches, clocks and automata that would win him eternal fame. Today Jaquet-Droz’s namesake company is part of the Swatch Group, and a fine purveyor of unique watches that blend high quality movements with exquisitely crafted dials. And his famous automata are still very much active and functioning. In December 2011, The Writer, currently housed at The Museum of The History of Art of Neuchatel, was taken on a three day tour of China. And earlier this year, several of these mechanical masterpieces were showcased at the Jaquet-Droz booth at the BaswelWorld watch and jewellery fair.

With artists such as Jaquet-Droz at their prime, this period is widely considered the golden age of automata. But Jaquet-Droz was also a businessman. And the automata served not only to showcase his talent but also to market the Jaquet- Droz brand. In the years to come, the brand would have representatives in far foreign markets such as China, Japan and India.

Indeed, one of the most famous automata of all time was manufactured, if not designed, in India itself. And it was, without a doubt, the quintessential “toy for a boy" of the age. That boy being Tipu Sultan, the king of Mysore and scourge of the East India Company. Tipu, a charismatic leader and military genius, was obsessed with two things—tigers and Englishmen. He loved the first. And hated the second. And so sometime in the early 1790s, he commissioned the automaton that is today popularly known as Tipu’s Tiger.

Constructed from painted wood and with metal, mechanical innards, the automaton shows a life-sized tiger mauling a European man lying on his back. According to the Victoria and Albert Museum (V&A) in London, where the automaton now resides, while the tiger is believed to have been made by Indian craftsmen in India, the mechanism itself appears to be of European origin, and quite possibly constructed by French craftsmen in Tipu’s court who probably came from the revolutionary government in France with whom Tipu maintained cordial diplomatic relations. (Tipu was prepared to make friends with any enemy of the English.) Relics of innovation: The Draughtsman, The Musician and The Writer. Photo credit: Jaquet-Droz

The decline in the world’s craze for automata came as a consequence of the French revolution which shook the foundations of European nobility. Soon there were only a handful of automata makers, most of them working out of workshops in Paris. But with the onset of the Industrial Age, and later the automobile revolution, the automata was soon eclipsed, not least because there was wider understanding of how things worked, thus dimming their mystique, but also because the rich soon had bigger, shinier, louder things to buy and flaunt.

Today, automata are prized possessions in museums and private collections all over the world. Many of them, astonishingly, are still in perfect working order—a testimony to how well these toys for rich boys were made. These may have been some of man’s earliest frivolous gadgetry, but, much like today’s gadgets, they were also showcases of the limits of man’s technological ingenuity.

• The piece may have been inspired by British civilian Hugh Munro, who was mauled to death by a tiger in 1792 in Bengal. Munro’s father was a general who had once beaten Tipu’s father in battle.

• At 28 inches in height and 68 inches in length, the piece represents both the tiger and the victim almost life-size.

• The tiger was damaged by bombs during World War II and had to be reinforced.

• Operating a crank handle near the tail initiates two functions. As the tiger makes grunting noises, the man wails and beats the air with one hand. Simultaneously, the crank powers a small pipe organ inside the belly of the tiger that can be played through a set of small keys.