However, as usual, headlines on paycheques are misleading. There are two important factors to be considered before grumbling about money in football. The first is that pay packets that make headlines are only earned by a select few. These pay packets also make averages misleading. Not every footballer earns Lionel Messi’s salary of £13 million and not every club pays star-studded Barcelona’s average wage of £5.26 million. For example, in La Liga (the Spanish football league), the average player wage of the top 20 clubs is £1.63 million. The median is a more modest £0.65 million. Including second- and third-division teams reduces these numbers even more dramatically. Moreover, even for high-paying clubs, not every player is in the first team. A lot of clubs have a roster of poorly paid young players training to make it into the first team. Also, due to the total commitment required to play at the top level, most footballers lack the educational qualifications to secure a high-paying job after retirement. Most retired players do not find coaching or commentating jobs and thus try their hand at business ventures interspersed with ribbon-cutting ceremonies.

Not only is the earning period short but youth, fame and money are not conditions conducive to a parsimonious lifestyle. Even as stars earn in millions, they spend millions on designer cars, clothes and houses for themselves and their friends and relatives. Irish footballer George Best put it succinctly: ‘‘I spent a lot of money on booze, birds and fast cars. The rest I just squandered." 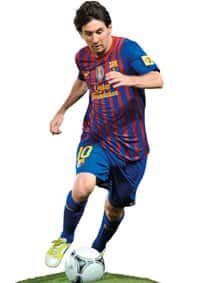 Although flashy, high-rolling lifestyles are the norm, some sportstars still manage to retire with their wealth intact. The main differentiator is successful tax and investment management. Football earnings are more than enough to indulge in a £8 million Teletubby house (Gary Neville) or gold-plated Cadillacs (El-Hadji Diouf). But they can’t cope with speculative property investments (Jason Euell), ill-thought ventures (Brad Friedel’s football academy in Ohio), gambling addictions (Dietmar Hamann) and Ponzi schemes. Add in own goals due to tax complications (Diego Maradona’s £30 million tax debt) and you will actually be surprised to see a rich retired footballer.

Investing failures don’t happen because footballers are more gullible or naïve than the rest of us. They are due to two sets of ingrained behavioural biases. The first is the strong belief that effort leads to success. In sports, training and performance are highly correlated. Unfortunately, success in business and investing depends on a number of factors beyond an individual’s control. This is hard for sportstars to understand and accept due to the human tendency to translate exceptional ability in one field to all fields. The classic example of this tendency is Michael Jordan’s failed entryinto baseball. Unfortunately, belief in business and investment ability coupled with the sunkcost fallacy leads sportstars to burn enormous amounts of money in ultimately doomed ventures.

The second bias is the belief that an aggressive strategy is the winning one. In sports, the player who hangs around at the baseline or the team that keeps to its half seldom wins. Translating this into investments, sportstars tend to favour risky and speculative ventures. For UKbased footballers, investing in films and property seem to be favourite money losers. Former footballer Keith Gillespie blamed more than half a million in losses in films for his bankruptcy.More happily, David Beckham’s substantial fortune was better able to suffer the shock of his Dubai property investments. Not only do sportsmen invest in risky ventures, but they are blind to the actual risks. A lifetime of assessing fairly clear-cut riskreturn scenarios in sport makes such evaluation more difficult in business and investing. There are only two outcomes after bending it from 20 yards—a goal or not. In contrast, the percentage return from Dubai property can range from highly negative to highly positive, and catches even finance PhDs offside.

These problems look theoretical and esoteric to the rest of us who have to agree with our bosses for our daily bread. However, they become real when the almighty passes on a windfall gain. A multiyear guaranteed payout by an employer or gains from a start-up’s successful IPO can put ordinary people in similar positions.

As with footballers, financial freedom after a windfall gain depends on successful investment of the proceeds. Awareness of inherent behavioural biases is the first step towards overcoming them. The next step is making investment decisions in consultation with those who have expertise and ability. Just as one consults doctors and lawyers, one needs the services of professional money managers. The final realization is that higher returns only accrue due to higher risk. Unless excitement is more important than returns, most of the portfolio should be in boring low-risk assets to provide a steady income. In investing, unlike in football, German discipline is more successful than Brazilian flair.

Shashank Khare is a London-based investment professional, learningfrom the capital markets what they didn’t teach him at IIM, Ahmedabad.

Respond to this column at Indulge @livemint.com