Thanks for Visiting Mint
You seem to have an Ad Blocker on. Please turn it off in order to continue, or whitelist Mint
HOW TO TURN OFF AD BLOCKER
OR
REFRESH IF YOU ALREADY TURNED OFF THE AD BLOCKER
Home >Companies >Kingfisher Airlines staff may go on strike from Friday

Kingfisher Airlines staff may go on strike from Friday

Kingfisher Airlines staff may go on strike from Friday

Mumbai: Employees of cash-strapped Kingfisher Airlines Ltd have threatened to strike work from Friday if they are not paid salaries and dues by Thursday night.

This followed inconclusive talks between representatives of pilots and engineers and the management on Monday. The airline’s employees have not been paid since February.

Capt. Yatim Pandit, a senior Kingfisher pilot, confirmed that employees had set a Thursday night deadline. He said no flights would be disrupted till then.

The airline is doing its best to pay at least the February salary, said a senior company official, who didn’t want to be named. The airline was working out “external possibilities’’ to generate cash to clear the dues, he said, without giving details. Two pilots who attended the meeting confirmed this. 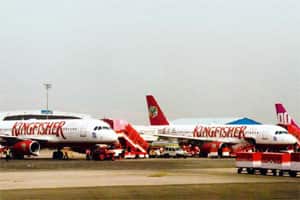 Funding woes: Kingfisher Airlines has a funding requirement of close to $1 billion, of which $500-600 million is needed immediately. Photo: Harikrishna Katragadda/ Mint

Staff at struggling carrier Kingfisher are threatening to strike if they don’t get paid by Thursday evening.

With the talks having failed, the airline’s flight schedule may be disrupted further since the Vijay Mallya-promoted Kingfisher Airlines has downsized its operations from 365 flights a day to 100 under a temporary plan due to a cash crunch.

A section of pilots at rival carrier Air India are meanwhile continuing with a strike that has lasted more than 50 days.

Kingfisher Airlines has a funding requirement of close to $1 billion, of which $500-600 million is needed immediately and a further $300-400 million in the next fiscal year, according to an estimate by consultancy firm Centre for Asia Pacific Aviation (Capa).

The dip in the holding follows the conversion into equity of warrants issued to LKP Finance Ltd, which now has a stake of more than 16%.

Meanwhile, Kolkata-based SREI Infrastructure Finance Ltd, which has taken over ICICI Bank’s loans to Kingfisher, said it doesn’t expect the carrier to repay them.

“We do not expect Kingfisher to repay the loans," said Sunil Kanoria, vice-chairman of Srei Infrastructure Finance, the flagship company of the group. “We will make money at an appropriate time out of the assets that were mortgaged to secure the loans." These, according to him, are “good and liquid" securities.

The group spent Rs425 crore to buy from ICICI Bank a part or all of its loans to the beleaguered airline through one of the six funds run by Srei Venture Capital Ltd. The India Global Competitive Fund, which bought over Kingfisher’s loans, had till 31 March invested Rs712 crore, mostly in debt securities, according to the group’s website.

According to Capa outlook, the airline is surviving on the basis of bare minimum infusions by the promoter, while it seeks external investors.

“So far there is no known serious interest and the longer it takes, the more difficult it will become to turn the airline around," Capa said. “The most likely suitor for Kingfisher Airlines is thought to be a strategic foreign airline investor." As the consultancy pointed out, current regulations prohibit such investments, although a proposal to allow a 49% holding for a foreign airline is under consideration.

“Kingfisher Airlines appears to be holding on in anticipation of the restriction being lifted however the timing of such a development remains uncertain," Capa said.

Some stock analysts have stopped covering Kingfisher Airlines. Due to an unfavourable risk-reward ratio and given the uncertainty over the company’s future outlook, ICICI Securities Ltd senior analyst Rashesh Shah recommended in a March report that investors exit the stock.

“With lesser capacity, we believe it would be a tough job for the company to service its huge debt with lower earnings, going forward," Shah wrote.

Manish Basu in Kolkata and Reuters contributed to this story.