The transaction would be funded through existing cash reserves and incremental debt, and is subject to CCI approval

Mumbai: Birla Corp. Ltd on Monday said it had agreed to acquire two cement assets from the local arm of Lafarge SA with a combined production capacity of around 5.15 million tonnes (mt) for a total enterprise value of ₹ 5,000 crore.

The plants in Chhattisgarh and Jharkhand were put up for sale after Holcim of Switzerland and France-based Lafarge agreed this year to a global merger that required the divestment of the assets to meet local competition rules.

Although driven by the antitrust regulator, the Competition Commission of India (CCI), the deal also reflects the perennially consolidating nature of the cement industry in India, which has seen 20 mt of production capacity change hands in seven deals worth a combined ₹ 16,000 crore in the past two years. With some more cement assets on the block, industry experts expect more consolidation.

Birla Corp. will acquire Lafarge’s Sonadih Cement, a grinding unit in Jojobera, Jharkhand, along with its brands Concreto and PSC. It will also acquire the Sonadih unit in Chhattisgarh.

The two units being sold by Lafarge are among the most profitable cement plants in India, generating about ₹ 700 crore in pre-tax profits a year even in the current depressed market. That is partly because of the availability of raw materials in close proximity to the plants.

“The acquisition, together with the Concreto and PSC brands, perfectly fit into our strategic vision and ambition of enhancing competitiveness in our chosen markets," said Harsh Lodha, chairman of Birla Corp.

Besides regulatory clearances, the deal is conditional upon Birla Corp. securing the limestone mining rights of the two units. The mining rights may not be automatically transferred to Birla Corp., but without access to the deposits estimated at 145 mt, the plants will have to be mothballed.

The brands Concreto and PSC were crucial for the closure of the transaction, which would take Birla Corp.’s total annual capacity to manufacture the building material from 10 mt to 15 mt.

Concreto is one of the strongest cement brands in India, and in some markets commands a premium of up to ₹ 55 for a 50kg bag. PSC, too, is considered a premium brand.

“The deal would not have happened had these brands not been a part of the deal. Birla Corp. was keen on these brands, as they are established brands names in the relevant market," a person directly involved in the deal said on condition of anonymity. 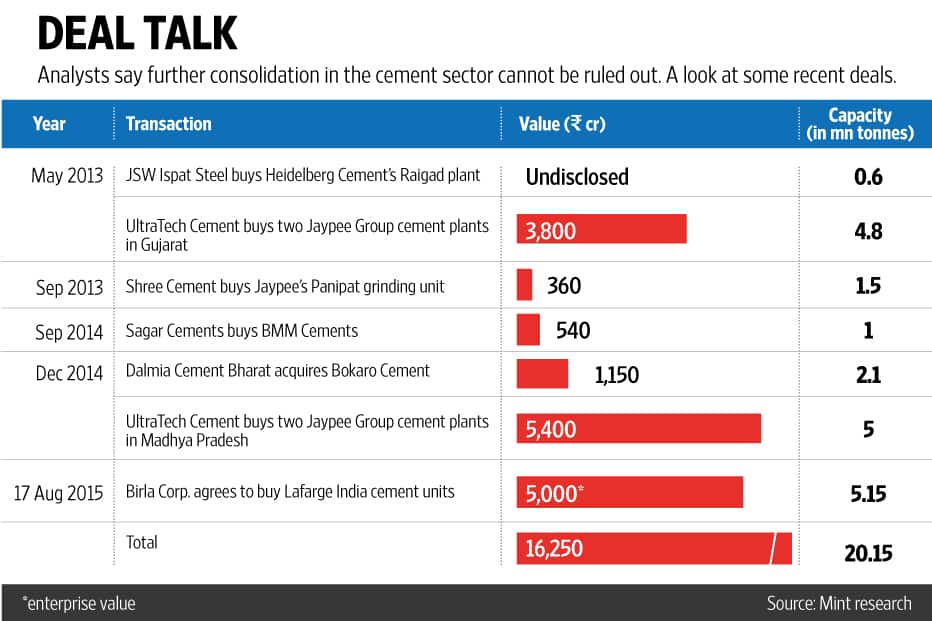 Birla Corp. plans to fund the transaction with existing cash reserves and incremental debt. As of 31 March, Birla Corp. had total debt of ₹ 1,300 crore and a debt-equity ratio of 0.5 times.

Birla Corp. has secured commitment from its lenders for up to ₹ 3,500 crore of loans, according to chairman Lodha. The remaining ₹ 1,500-1,700 crore will come from the company’s own coffers.

If the deal goes through, Birla Corp. will make small investments in the plants such as for generating electricity from waste heat recovery, he added.

The deal may not be earnings per share accretive—or shore up Birla Corp.’s profit per share—in the short term, according to an analyst. “It may, however, turn out to be a prized catch in the long run because the acquisition can potentially bring down the cost of operation of Birla Corp.’s own units," this person said, asking not to be identified.

The top management of Birla Corp. was initially divided over whether to bid for the plants, according to a key official who also did not wish to be named. “Because of the price, one section was a little apprehensive, but in the end, we decided to go for it," this person said. “Because building a new plant from scratch with such raw material linkages isn’t easy."

Last year, Holcim and Lafarge announced plans for a merger of equals to create LafargeHolcim. The transaction was concluded in July this year. As a precondition to clearing the Indian leg of the union, the Competition Commission of India directed Lafarge to sell the two assets in Chhattisgarh and Jharkhand.

Discussions between Birla Corp and Lafarge, according to people familiar with the situation, started in May 2015.

“To close the deal by August, this deal has surely been a rapid-fire one. However, Lafarge, with its strong global presence, has been a hard negotiator," the person cited in the first instance said.

The person added that Irish firm CRH Plc. and HeidelbergCement India Ltd and a couple of private equity firms were also interested in acquiring the assets.

Heidelberg Cement India on 24 July told BSE that it is “not considering any such proposal at the moment".

“JSW Cement was part of the bidding initially, however, did not pursue it further as it did not fit the company’s strategic interests," said another person directly involved in the initial talks between JSW Cement and Lafarge.

LafargeHolcim plans to utilize the ₹ 5,000 crore cash proceeds to retire debt at the global level, a spokesperson for LafargeHolcim said in an emailed response on Monday to queries from Mint.

While the sale of the LafargeHolcim assets had been anticipated, analysts say further consolidation in the cement sector cannot be ruled out.

Most of these firms continue to scout for potential acquisition targets.

The group could not bid for the Lafarge assets because of a rider imposed by the CCI that only cement companies with a less than 5% market share in the relevant market can buy the Lafarge plants.

There seems to be no dearth of sellers in the market either.

“Surely, we expect more consolidation in the cement sector. In the next few years, the Indian cement industry would be dominated by five to six prominent cement companies as a result of this consolidation. We expect deals in the South India cement market and debt-laden cement companies to offload assets," said Amey Joshi, associate director at India Ratings and Research Pvt. Ltd.

“Jaypee group is looking for a buyer for its Bhilai cement plant and one of its assets in South India," said a banker with a domestic investment bank who did not wish to be identified.

An email sent to officials at Jaypee Group on Monday remained unanswered.

Reliance Infrastructure Ltd and ABG Cement were earlier on the lookout for buyers for their cement assets.

ABG Cement was in the market looking for a buyer for its six million tonnes cement capacity in Gujarat, said an executive from a cement company looking to buy assets.

This was earlier confirmed by a banker with a foreign investment bank advising cement clients.

The company’s promoter Rishi Agarwal said in a text message that ABG Cement wasn’t in the market.