Demonetisation impact on Q3 earnings not as bad as feared

Mumbai: The impact of demonetisation on corporate earnings may have been overestimated, December quarter earnings data shows.

More than 58% of the top firms that have reported their financial results for the three months ended 31 December exceeded or met analysts’ estimates. A Mint analysis of 94 of the BSE500 companies shows that 55 have reported earnings that met or beat estimates.

The ratio is little changed from the September quarter, when more than 58% of these firms met or beat estimates. 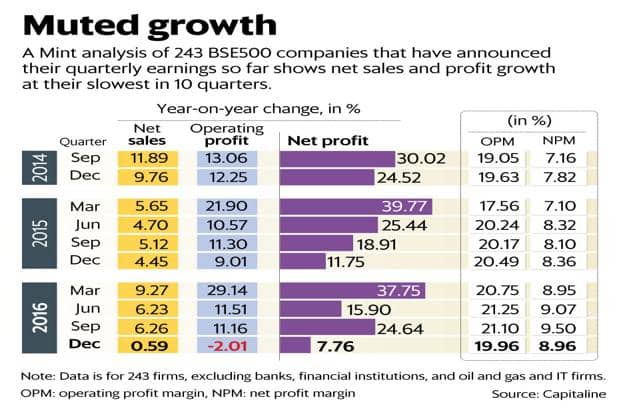 “Compared to pessimistic expectations and worries, the earnings have been a respite," said Gautam Chhaochharia, head of research at UBS Securities India Pvt. Ltd. “The numbers suggest the impact of demonetisation was not that significant as earlier perceived."

A surprise announcement by the government to withdraw high-denomination notes on 8 November hurt businesses across the country, with the consumer-centric ones being hit the hardest. While the currency swap has slowed the economy, analysts still expect economic growth clock one of the fastest rates this fiscal year.

In the absence of a comparable event in the recent past, it was a difficult exercise for analysts to estimate the impact of demonetisation on earnings.

Biotechnology firm Biocon Ltd’s profit rose a forecast-beating 65% to Rs171.3 crore in the quarter on the back of strong sales across segments.

The worst may not be behind them, analysts warn.

“There is no visibility of earnings recovery as yet in terms of capex cycle, policy support and the global environment," Chhaochharia said.

Separately, an early bird Mint analysis of 243 of BSE500 companies that have announced their quarterly earnings so far and for which comparable data was available for at least 14 quarters showed that net sales and profit growth for these firms was the slowest in 10 quarters.  Banks, energy and technology firms were excluded from this study, as they follow a different earnings model.

The study showed that net sales and profit for these 243 firms rose 0.59% and 7.76%, respectively, indicating demonetisation and the absence of a pick-up in capital expenditure and private investment weighed on operations. Operating profit for the companies contracted 2%, the first such decline in at least 10 quarters.

ALSO READ | How much has demonetisation affected the stock market?

“The commodity prices are rising and eating into margins, and profits, which is why the contraction in operating profit," said Dhananjay Sinha, head of research at Emkay Global Financial Services Ltd.

To be sure, many firms are still to announce their earnings for the quarter, and the picture could change when all the information is available.

“Sales growth is flat, and I think this trend will continue for a quarter or so. The budget will be critical and it is likely to be an expansionary budget with stimulus package to make up for demonetisation," added Sinha.

Sinha pointed out that while things were good until October for consumer-centric firms, they were hit by demonetisation starting November. “The positives from a good monsoon did not translate due to this and media companies were also hit by lower ad spends by FMCG (fast moving consumer goods) companies," said Sinha.