L&T has grown from a tiny office that couldn't even fit in two people to a firm with over 54,000 employees across segments

Out of the claustrophobic confines of a tiny Mumbai office which could accommodate only one of its two founders emerged India’s biggest engineering and construction firm, touching businesses across sectors and spanning the planet in just a few decades.

The outbreak of World War II was still a year away when two Danish engineers arrived in India in 1938. Friends from school days, Henning Holck-Larsen and Soren Kristian Toubro had come to set up a small office to represent a dairy equipment manufacturer from their home country for a nominal fee. The office was so tiny it could not even fit in both of them.

As war broke out in Europe in 1939, import restrictions followed and the friends were forced to wind up their business. The Danish duo then opened a small workshop for engineering work and services. The war offered them an opportunity to fix damaged ships and soon, two repair and fabrication shops were up and running.

The biggest break for the engineers, who named their venture Larsen and Toubro Ltd (L&T), came from the Tatagroup in 1940. As most German engineers could not offer their services because of the war, L&T won an assignment to build a soda ash plant for the Tata group. L&T proved its capability at execution, and the reputation has not left the company since.

Within four years, L&T had a dedicated engineering wing and the company was quickly tying up foreign collaborations. By 1945, L&T represented British manufacturers of machines used to produce hydrogenated oils, biscuits, soaps and glass. It also entered into an agreement with US-based Caterpillar Tractor Co.for marketing earth moving equipment.

Once the war ended, plenty of Caterpillarequipment was available at attractive prices. L&T raised additional equity capital to buy it and a private limited company was created. L&T was setting up offices across India at a time when the country was marching towards independence.

Journey to the top

In 1962, Toubro retired from active management. Holck-Larsen retired as chairman in 1978.

Another interesting twist after the exit of Holck-Larsen was that L&T became a company with no promoters. Bigger conglomerates such as Reliance Industries Ltdand the Aditya Birla Groupwere keen to buy the promoter-less blue chip, but those moves were successfully thwarted.

The twists and turns faced by L&T are meaningless without the mention of its chairman Naik, who joined the company as a junior engineer in 1965. Naik rapidly rose to positions of increasing responsibility, as he moved from general manager to managing director and chief executive officer, finally becoming chairman in December 2003.

Naik was instrumental in demerging the cement business, conceptualizing the proposal of employee trust, globalization of business, and indigenization of critical technology in defence and nuclear sectors. 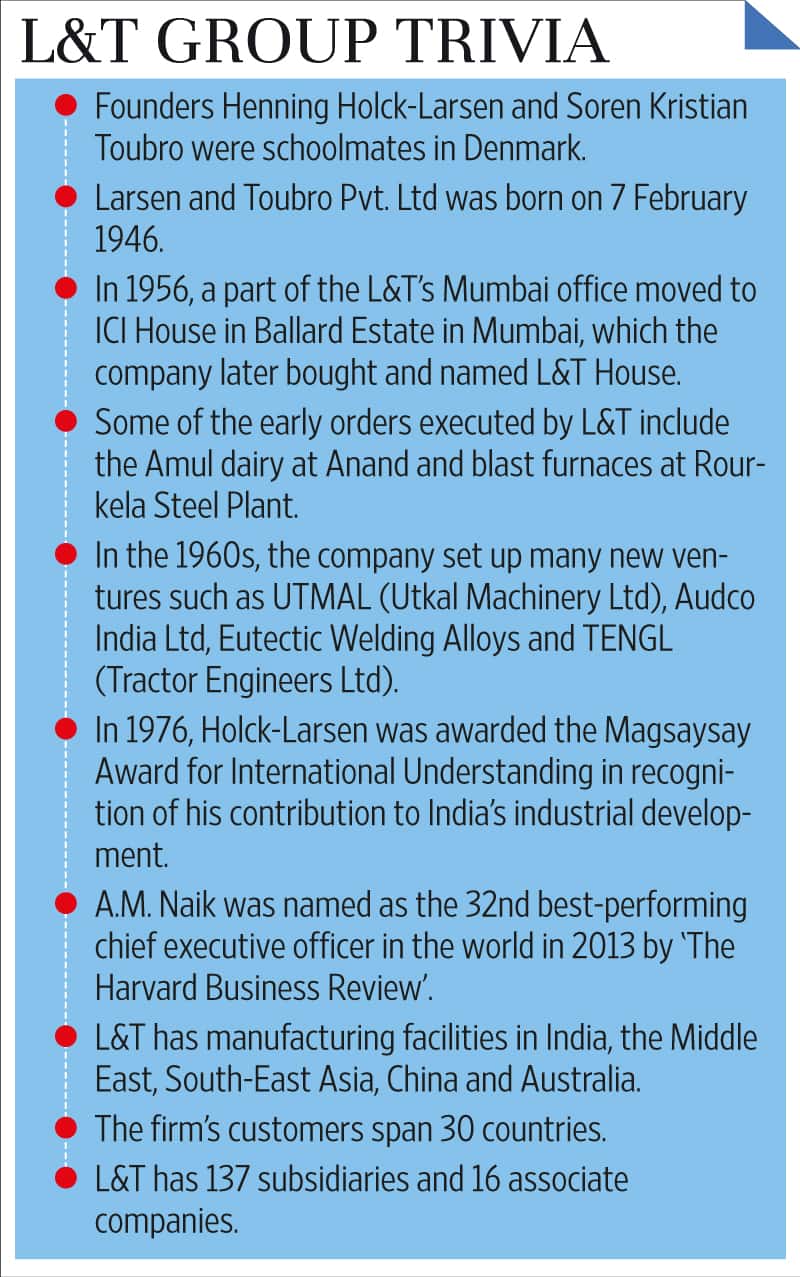 L&T has also emerged as one of the top engineering firms outside India, especially in the Middle East.

Focusing on foreign markets has helped the company maintain profitability at a time when peers were struggling for fresh orders.

The company is now planning to take its technology and information technology play to the next level. L&T Technology Services and L&T Infotech Ltd, two of its subsidiaries, are planning initial public offerings, expected in 2016.

The $14 billion (around Rs85,400 crore) conglomerate was also one of the unsuccessful contenders for a banking licence in 2014. However, it has ambitious plans for its financial services arm, with an infrastructure development fund already under its umbrella.