New York: Infosys co-founder N R Narayana Murthy is among the 12 “greatest entrepreneurs of our time" according to a Fortune magazine list that is topped by Apple’s late chief Steve Jobs. It includes Microsoft founder Bill Gates and Facebook CEO Mark Zuckerberg for turning “concepts into companies" and changing the “face of business". 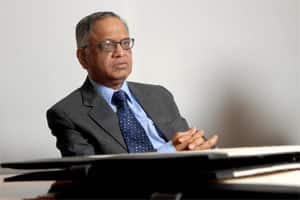 Murthy, 65, proved that “India could compete with the world by taking on the software development work that had long been the province of the West. “As one of six co-founders of Infosys and the CEO for 21 years, Murthy helped spark the outsourcing revolution that has brought billions of dollars in wealth into the Indian economy and transformed his country into the world’s back office," it said.

Fortune cited his lesson that an organisation starting from scratch must coalesce around a team of people with an enduring value system. “It is all about sacrifice today, fulfilment tomorrow," it quotes Murthy, who is ranked 10th, as saying. “It is all about sacrifice, hard work, lots of frustration, being away from your family, in the hope that someday you will get adequate returns from that."

The list is topped by Jobs, whom Fortune calls “our generation’s quintessential entrepreneur. Visionary. Inspiring. Brilliant. Mercurial." Fortune said the most astonishing fact about Jobs was his view that market research and focus groups only limited a person’s ability to innovate.

Jobs used his own intuition, which was not merely a gut call, “radar-like" feel for emerging technologies and how they could be brought together to create “insanely great" products, Fortune said.

“It is a safe bet to assume that none of Apple’s blockbuster products, from the Macintosh to the iPod and iTunes, from the iPhone to the iPad, would have come about if Jobs had relied heavily on consumer research," it added.

Fortune related an incident when a reporter had called Jobs on the day he launched the Macintosh, asking him what type of studies Apple had conducted to ensure there was a market for the computer. “In a nearly offended tone, Jobs retorted, ‘Did Alexander Graham Bell do any market research before he invented the telephone?´", according to the publication.

Coming next is Gates, who Fortune says is one of the very few extraordinary entrepreneurs who have had the opportunity to change the world twice in one lifetime. “First, as the world’s most influential geek, he helped usher in the personal computer revolution. “Now he is tackling the stubbornly difficult challenges of global health and public education as the world’s most generous philanthropist," Fortune added.

Fortune said the similarity between how Gates led Microsoft and the way he is leading the Bill & Melinda Gates Foundation as its co-chair is the focus on hiring very smart people and putting them to work in small teams to solve big issues. “There is no way of getting around that," it quotes Gates as saying. “In terms of IQ, you’ve got to be very elitist in picking the people who deserve to write software."

On Zuckerberg, Fortune said by the time he celebrates his 28th birthday this May, Facebook would have in all likelihood gone public and become the biggest IPO of all time. “The long-anticipated IPO will create hundreds of millionaires, result in a valuation of an Internet company that will approach $100 billion, and make the geek who dropped out of Harvard University his generation’s Bill Gates," it said.

Fortune said Facebook has become the world’s dominant social network because of an “obsessive entrepreneurial genius" who has taken a page from another of Silicon Valley’s legendary denizens, Intel’s Andy Grove’s dictum that only the paranoid survive.

“Zuckerberg is the Valley’s most paranoid entrepreneur these days, taking nothing for granted. “It’s why he has pushed out a constant flow of innovative changes to Facebook’s platform, making it easier for developers to create applications for the community and ensuring that each new iteration keeps it ahead of the competition. “It’s the single most important explanation for why Facebook has yet to face any formidable rival in its space, including last year’s challenge from heavyweight Google."

Also on the list is Bangladeshi economist and founder of the Grameen Bank Muhammad Yunus, who through his institution helped “pioneer and spread the concept of microcredit". “While the bank could not eradicate poverty, it lifted many lives. No less critical, Yunus’ idea inspired countless numbers of young people to devote themselves to social causes all over the world," Fortune said. It said the people on its list have world-changing vision who have had social and economic impact.

“Great ideas are hard to come by. Putting them to work is even harder. Each of their companies sits at the nucleus of a thriving ecosystem that has cultivated and nurtured dozens if not hundreds of other enterprises," Fortune said.