On the Jodhpur Polo ground, eight horses form ranks like rugby players lined up for a throw in. Nostrils flared and muscles straining, they prance impatiently under their riders. A white ball is tossed into their midst by a very, very important person and, in a sudden ripple of horseflesh and a muffled pounding of hooves on turf like fingers drummed on felt, the game begins. 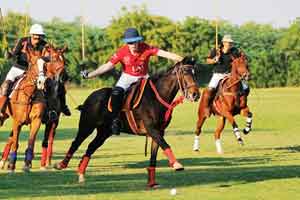 It’s an impressive sight, gladiatorial in scale and atmosphere, but few of the spectators are taking much notice. They chat desultorily, stroll in crisp linens and floating chiffon between the bar and the gift stalls, occasionally shading their eyes against the afternoon sun as they peer out towards the melee and turn back, not much the wiser. But despite their apparent lassitude, few of the spectators would have given up the chance to be present at the inaugural British Polo Day in India—a stylishly executed weekend of social and sporting events in Jodhpur in December, comprising polo matches between Eton and Mayo Colleges, the final of the Umaid Bhawan (the residence of the Maharaja of Jodhpur) Cup and the main event: a match between the Jodhpur Eagles and the British Army. 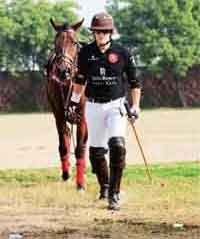 It must be said that polo is not much of a spectator sport unless you are an aficionado of the game and know exactly what to look, or listen, for. Karanvijay (K.V.) Singh, the captain of the Jodhpur Eagles— tall, genial and given to making gnomic pronouncements about his sport—says that he can tell from the sound of a ball as it connects with a stick whether it has gone between the goal posts. Unless you are gifted with similar perspicuity, however, you are likely to be frustrated. The rules are simple enough in theory but, even armed with all the relevant information, the reality of scrutinizing a distant charging mass of horse, and desperately trying to construe the movement of a tiny white speck among it, is an arduous one. 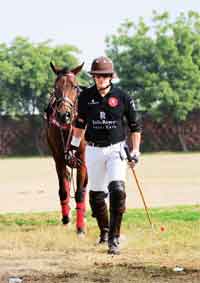 And you must observe the inherent drama: “It’s theatrical to an extent," he says. Ledger’s colourful vocabulary helps, and many of the spectators look bemused by his expressions. “That’s a real daisy cutter!" he roars as the ball flies across the grass towards the goal posts. “Fast, furious stuff with both sides playing superlative polo here today… That was so high it came down with ice on it! Oh! He’s going along at full chat but couldn’t quite turn the corner there."

Polo is a game of two faces then: on one hand its inherent glamour appeals to luxury brands and corporate sponsors, who jump at the chance to associate their names with a sport traditionally played by princes. The list of sponsors for British Polo Day reads like a who’s who of luxury brands, from the RBS private bank Coutts, Taj resorts, Barbour, Ettinger, Backes and Strauss and British fashion label Beulah. But despite the designer trappings, at the root is a serious sport, and for the players, and the stable managers, the coaches and the grooms, the game is the thing.

The atmosphere on the far side of the pitch, away from the muslin-draped bleachers and crystal glassware is quite different. Here, there is no room for frippery; for the people on this side of the grass, polo is a way of life, a livelihood, and a compulsion. Dhananjay Singh, 26, who plays for the home side, the Umaid Bhawan polo team, and manages its horses, voices that thought in emphatic installments: “I love this sport. I don’t do it for the glamour, I love it and I love to do it well. I’ll die on the field and not in a bed. It’s an addiction." Dhananjay’s enthusiasm for the sport is inherited. His grandfather was an eight-goal player and the first Indian to play the Argentine open. As he lines up the six ponies he’ll be riding in the match, calling out the order to his grooms and stable manager, Singh’s attention is drawn to an ambulance that is about to park a few yards away. He turns to a groom: “I don’t want the ambulance near my horses, get him to move away," and then back with a smile, “I’m a bit superstitious."

He’s not the only one. K.V. Singh lines up his three sticks on a blanket in front of him as he prepares for the match. “Three sticks are for luck," he says. “I don’t use them all. I just use this one," he indicates the one in the middle which, to the unpractised eye, looks identical to its fellows. “The closer the joints are the better. It can’t be too stiff or too flexible; you should be able to connect with the ball.

These are Argentinian canes—they are the best." There are a hundred different variables that can make or break a player’s day, from a stick falling apart on the field, to an injured horse. The previous day, Singh had played in the Mayo College team that beat the visiting old Etonians. “My hand got cramp half-way through the game, and I couldn’t open it," he says, making a claw of his right hand to demonstrate. “I think it’s because I hadn’t eaten any salt for a while."

All the players know their mounts well: which one is best to play at each stage of the game. Although there are four chukkas, a player normally keeps six ponies at the ready for a game. Dhananjay assesses his group quickly and rules out his best ponies from playing more than half a chukka each, to save them for the rest of the season. The animals are nurtured obsessively to produce that charge of muscle energy as the ball is thrown in. The stables of the Maharaja of Jodhpur are a hive of industry; from early in the morning until sundown, grooms brush and shovel and shine to make it all possible. About 25 grooms (roughly the same number as there are horses) are employed by Umaid Bhawan and they are all local Rajasthani men, who are trained in the stables.

The grooms know the horses intimately and can point out a pony that is having a bad day or one which needs to stretch its legs, with ease. Many have grown up riding, their forefathers have worked with horses, and yet they have a different relationship with the sport than that of the players. As K.V. Singh points out, at the end of the day, “it’s only the people with money who can play. That’s why it’s called an elite sport". And yet, the number of people who are involved in creating each short moment of a 28-minute game is momentous, and perhaps it is that grandness of scale that lends the support its allure.

Polo players have to rely on their horses absolutely, and school them in various techniques to make life easier on the pitch. Ledger explains one such trick with the aid of an empty 7-Up bottle: “A flying change is when the leading leg of the horse is changed as you ride," he says. “If the pony’s right foreleg is leading, and you are leaning right, the skill is to rebalance the pony before you lean out for the ball, so it doesn’t fall over. They’re schooled so that when there is a transfer of weight they’ll change legs automatically."

The players must also rely on each other. Although they are allotted positions from 1-4, one being the striker and four the defence, in play their formation resembles a continual chain. “It’s like a train, if you miss, the other guy has to catch the ball," says K.V. Singh. Some of the Jodhpur Eagles have been playing together for years. They call each other by mockserious nicknames, like “Hunter" and “Rockstar". The younger players such as Dhananjay Singh credit the older ones with teaching them everything they know.

It’s probably because of such patrons that polo has survived in the guise we still see it today. A unique feature of polo, says Ledger, is that it is one of the two sports at which an amateur can play alongside a professional. The other is golf. This is because of a handicap system (see box), which puts two teams of differing ability on an even footing. This system also makes it possible for a mediocre player, who nevertheless has the money and the inclination to start his own team, to do so. “An amateur who wants to play polo can pay a professional to play on his team," Ledger says. “He agrees his contract with the players. In high goal, which is 22+ handicap, he is probably going to be paying his eight- or nine-goal players £750,000 for a season." The professionals are guaranteed a good income and the amateurs, a place on a prestigious side.

Even so, it remains extremely difficult for a complete novice to break into the sport. Although there are polo clubs in Delhi, Jaipur, Mumbai, Kolkata and Hyderabad, they are not all open to new members, and usually a player would need his own horses to join an existing side, or be trained by an existing player. As a result, most players tend to have been introduced to the sport through family connections in India.

At Jodhpur, the sport now shows no sign of fading away. Col. Umaid Singh, the secretary of the Jodpur polo club, stares meditatively across the perfect expanse of green in a tweed plaid cap and a golfing jumper as the horses line up for the final match. “It’s a desert area," he says, with pride. “Only the best clubs in England have this kind of irrigation," agrees Simon Ledger as he raises his microphone to his lips, ready to begin.

Outdoor polo is divided into 4, 6 or 8 periods of play (chukkas) of roughly seven minutes each. The four players on each team must try to score goals through goalposts at either end of the pitch. The players are numbered (from one to four), and they hold positions on the pitch from defensive (3 and 4) to attacking (1, 2 and 3). As they hit the ball up the line towards the goal they must observe one basic rule known as “theline of play". When a player hits the ball, the line that will be described by the ball as it travels across the field may not be crossed by another player riding in from the sides. Another player may ride up parallel to the hitter and try to push him off course, nudging his pony off the line and capturing the right of way for himself.

A player’s handicap reflects his skill at the game. Handicaps range from -2 to 10 (-2 indicating a novice). When a team plays, its cumulative handicap is calculated and then measured against that of the opposing team. The difference is multiplied by the number of chukkas to be played and then divided by six. The resulting figure is the goal advantage given to the weaker side— any fractions are rounded to half a goal

Also Read | Neil Macdonald | Here, it is about the place

Nicholas Colquhoun Denvers | We are very concerned about horses