Jet to sell, lease back 737s, focus on low-fare business

Jet to sell, lease back 737s, focus on low-fare business

Jet, the country’s biggest airline by passengers carried, will also turn its focus this year to its low-fare business to take on smaller budget airlines that have grown exponentially in recent years. As on 31 December, Jet had a debt of ₹ 13,942 crore. 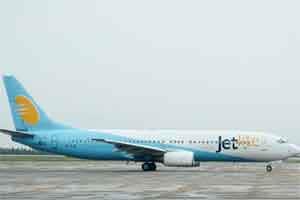 Air India, InterGlobe Aviation Ltd (that runs IndiGo) and SpiceJet Ltd have used this method to reduce their debt.

Jet sold and leased back five aircraft engines between October and December to raise ₹ 76 crore, as part of its efforts to reduce debt, said M. Shivkumar, senior vice-president (finance). Jet will get ₹ 666 crore by selling and leasing back the 737 planes, he added. The airline will have a cash surplus of $10 million (around ₹ 50 crore) per plane, after repaying the debt on the aircraft.

A senior analyst at a domestic brokerage said the sale-and-lease back will not ease the debt burden, but going forward the capability of increasing fares on domestic and international routes would provide better prospects. He did not want to be identified.

As for the low-fare focus, the airline will rename JetLite as Jet Airways Konnect by April. Both are existing all-economy brands, but JetLite, which was Air Sahara before Jet bought it in 2007, is run under a separate subsidiary.

“The merger of balance sheets is not contemplated as (of) this moment," said Shivkumar, adding that as passengers will have clearly defined options—one full-fare and the other budget - to chose from.

“We will be focusing a lot on JetLite business this year," Shivkumar told analysts in a separate call on Monday.

“The brand value of Jet Airways Konnect will be more after branding and we will be able to charge more," said K.G. Vishwanath, vice-president, commercial strategy and investor relations, Jet Airways.

JetLite will remain a legal entity, a shell company that will continue to own the planes operated under Jet Airways Konnect.

Over the next one-and-a-half years, JetLite will see at least six aircraft leases expire and in 12-18 months it will have a fleet of 20 new aircraft, including some existing ones.

The new aircraft will have 180 seats, much like that of IndiGo’s, the country’s top budget airline.

In calendar 2012, Jet’s capacity will remain largely “sedate", Shivkumar said, with only a 5% increase expected.

While Jet expects a possible reduction in fleet capacity at Air India and Kingfisher Airlines this year, it is uncertain how the leading budget carriers IndiGo and SpiceJet will use their new capacity for their international and domestic operations. “So we are looking at a -5% to +5% capacity addition (in the industry)," said Vishwanath. “Capacity addition will not be a cause for concern this year."

Jet has posted a fourth straight quarterly loss of ₹ 122.82 crore. The loss would have been higher by ₹ 360 crore in the December quarter but for a gain of ₹ 179 crore from fluctuations in the rupee’s exchange rate, the ₹ 76 crore profit from selling and leasing back aircraft engines, and a profit of ₹ 102 crore from the sale of development rights of its property to Godrej Properties Ltd.