Mumbai: It started innocuously, on 11 December, at a Tata Consultancy Services Ltd (TCS) press conference in Bengaluru, an annual event to announce the number of new employees TCS would be hiring.

The moment Ajoy Mukherjee, executive vice-president and global head (human resources) at TCS, mentioned the words ‘restructuring’ and ‘layoffs’, the focus shifted. Mukherjee’s other statements, although reported, didn’t. Statements such as these: “This is a year-long process." “It happens every year." “This is for senior and mid-level executives who the company believes are non-performers."

The next morning, in newspapers across the country, the restructuring at TCS was the big news. While others reported the event and a bit more about things slowing down in the information technology (IT) industry, Business Standard took it one level further. Attributing the information to company sources, it said, “These are employees with around 20 years of experience and some 25,000 employees could fall in this category. They would be reviewed during the process which will get over by February 2015, before the next appraisal cycle starts from March."

This was the first time the number 25,000 was mentioned in relation to TCS layoffs. And it stayed there.

Inside TCS, the folks didn’t bother to clarify matters, hoping that the story would die a natural death, when the media moved on to the next big story. They couldn’t have been more wrong. 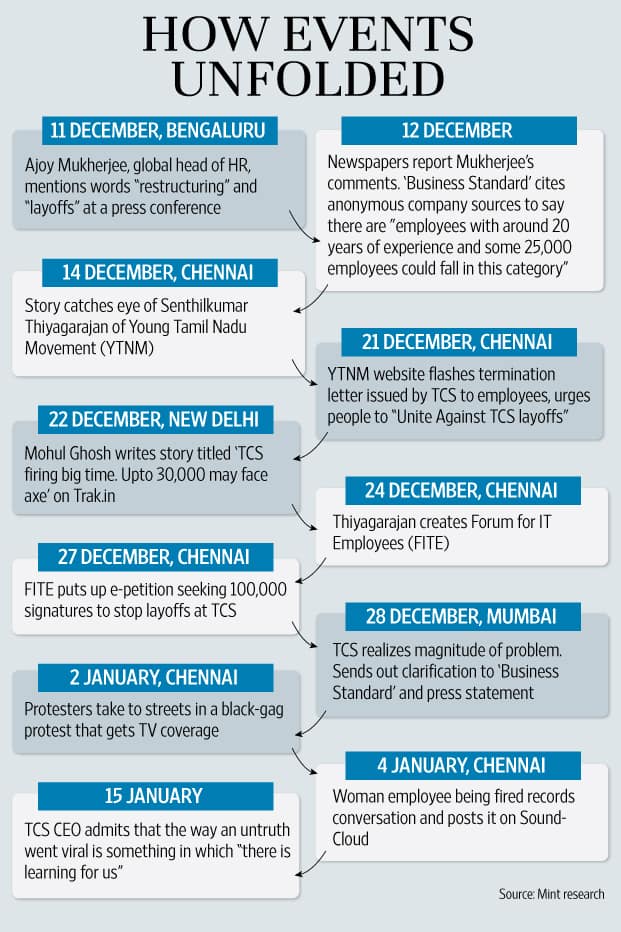 In the second week of December, a few days later, the story in Business Standard, a newspaper that competes with Mint, caught the attention of a man named Senthilkumar Thiyagarajan, 33, in Chennai, one of the founders of the Young Tamil Nadu Movement (YTNM).

YTNM in its earlier avatar was called Save Tamils Movement. It was founded in late 2008 in the wake of the war in Sri Lanka, when a bunch of IT professionals came together to protest the killings of Tamils in the island nation. Their tagline: “Stop the war. Save the Tamils." The members of the group: Bala Murugam (employed at Infosys Ltd and a coordinator at YTNM), Elangovan Santhanam (employed at Infosys and a spokesperson of YTNM), Saravanakumar (employed at Ramco Systems Ltd and coordinator at YTNM) and Thiyagarajan. In 2011, a few other members joined: Parimala Panchatchacharam (coordinator) and Thamiz Nazar (coordinator).

Thiyagarajan started out at TCS in Chennai and spent more than five years with the company, from April 2004 to August 2009. He then moved on to HCL Technologies Ltd where he worked till January 2014. And since then, he has been an activist.

Not that there was much to do with saving the Tamils, the war having ended in 2009. Early last year, Save Tamils Movement became Young Tamil Nadu Movement.

And with a new name, it found new causes. Like campaigning against the Kudankulam nuclear power plant, and then setting up a fact-finding committee to probe caste riots in Tamil Nadu, and then again, campaigning for the safety of women following the murder of TCS techie Uma Maheswari in Mumbai last year.

When Thiyagarajan read the Business Standard story on TCS layoffs, he called up a few friends at the company, got hold of a person who had been fired, scanned his termination letter, blacked out his name and then went to town with the information. Except, only in Tamil. On 21 December, the first call of “Unite against TCS layoffs" went out from YTNM in a letter published on its website. No specific number was mentioned, but the letter said thousands of TCS employees would be affected. (mintne.ws/1zrlBVR)

On 22 December, Thiyagarajan posted again, this time in another YNTM website (mintne.ws/1uiAuIV). Except that this letter had numbers: 25,000 and then in the next paragraph 35,000.

Both stories were tweeted from YTNM’s Twitter handle: @ilanthamizhagam, which had 95 followers as on 19 January 2015.

Where did the number come from? Thiyagarajan says it was all over the media. “If you read the newspapers, you will find them," he says. “It first appeared in Business Standard."

Now, it would be fair to say that both the letters penned by him went mostly unnoticed. But on the same day, help arrived from an absolutely unforeseen direction. From Delhi, when a 30-year-old man called Mohul Ghosh opined on his own version of the TCS layoffs story in a website called Trak.in. The post had a screaming headline: TCS firing big time. Upto 30,000 employees may face axe. (mintne.ws/1DTV456)

Needless to say, it was a thundering success, the best in the seven-year history of the website. As of date, it’s got about 800,000 unique page views, more than 9,500 shares on social media and 313 comments.

“Frankly, I was quite stunned by the reaction," says Ghosh, an occasional blogger, with a background in IT (having worked at SAP SE and International Business Machines Corp.) who now oversees digital marketing at the Indian School of Business and Finance, an institute in Lajpat Nagar in New Delhi.

“I have friends at TCS. They told me. I just wanted to highlight the fact that this is the same company that didn’t fire a single person in the downturn in 2008."

Did he reach out to TCS to check?

Of course the post was so well received that it didn’t matter. The comments thread was populated with people pouring out their hearts. Of strife and struggle in the IT industry. Their own plight. Some claimed to be TCS people. Others claimed to be ex-TCS people.

Such was the gullibility on the thread that a particular user has been posting under the name of N Chandrasekaran, the chief executive officer of TCS. And what was the fake Chandrasekaran doing online? Of course, agreeing to the complaints and the angst. And just like that, the news became big.

Everyone inside and outside TCS began talking about the layoffs. Newspapers started writing about it. Journalists in Chennai and Kochi started tweeting about it. And 25,000-30,000 became the gospel truth.

YTNM’s campaign got the much-needed boost. A few days before Christmas, Thiyagarajan got cracking on the job. But this time around, he did much more than just writing letters, and asking people to unite. A new organization was created: Forum for IT Employees (FITE). It had a website, a Facebook page and a Twitter handle.

YTNM and FITE are the same. Let’s put this in perspective. The three coordinators of FITE are all members of YTNM. That’s Thiyagarajan, Panchatchacharam and Thamiz Nazar.

Mobile numbers were handed out liberally with a request to contact YTNM immediately. The same posters were posted in and around offices of IT companies. To build pressure, old articles of layoffs at TCS in the past years began to surface and were shared by FITE on its Facebook page.

Questions began to be asked about the reason behind the layoffs. Poor performance? Slowdown in IT sector? Whatever the reason, how about reducing Chandrasekaran’s salary by 50%? On Christmas day, FITE shared a cartoon of Chandrasekaran dressed as Santa Claus with a Christmas gift of sacking 25,000+ employees. The post got 166 likes and 54 shares.

In late December, though, FITE took the campaign to a new level—seeking legal action against the company. It made headlines. That supported by FITE, laid-off TCS staff were consulting legal experts. On 27 December, an e-petition was put up seeking 100,000 public signatures to stop the layoffs at TCS.

As of date, it has got 11, 000 signatures. And just like that, FITE began getting attention and interest from other parts of the country. So much so that in less than a month, FITE has grown from a single chapter in Chennai to Bengaluru, Pune, Hyderabad, Delhi, Mumbai, Kochi and Kolkata. And all these units started holding their own meetings, asking laid-off TCS employees to join the struggle.

It read: “TCS has clarified that the restructuring will not affect “some 25,000 employees with around 20 years of experience", as mentioned in the report. A TCS statement says as has been mentioned by Ajoy Mukherjee, EVP and head of global HR at a press conference in Bengaluru on 12 December, “the annual involuntary attrition is between 1-2 per cent across the organisation which includes employees who retire, business associated hired for specific projects, etc". The error is regretted."

Putting on a show

It is another matter altogether that the damage had been done. Having tasted blood, FITE wasn’t willing to give up. Instead of contesting the number, its communication strategy now started doling out stories of TCS employees who had been laid off. A petition was made out to Prime Minister Narendra Modi seeking his intervention.

At the same time, FITE held a press conference at Press Club in Chennai. On 2 January, a black gag protest by IT employees was organized at Sholinganallur junction in Chennai. The number 25,000+ employees sacked by TCS screaming from all banners, posters and pamphlets. Following a crackdown by the police, it didn’t go so well, but television teams were there.

FITE put on a good show.

On 4 January, all hell broke loose when an audio of a TCS employee being fired by her manager was leaked on online audio platform SoundCloud. It went viral.

And just like that, labour departments in various states became interested in the story. So did other unions, the Centre of Indian Trade Unions (CITU), among others. FITE also filed a lawsuit in the Madras high court seeking a stay on the layoffs. Then it set up a fact-finding committee to look into the issue. A five member-panel comprising academics and activists was created to listen to the testimonials of employees in person and also on Skype.

The social media tool that was best employed by FITE was Facebook. And to a certain extent Twitter. As of date, the We Are Against TCS LayOff page on Facebook has 17, 299 likes. And the most popular post is a story in The Times of India on the Madras high court’s stay on the TCS termination of employees; the post got 583 likes, 24 comments and 220 shares. On Twitter, it was the SoundCloud audio (TCS Lies Exposed) of the termination interview of an employee which made the #tcslayoff popular. As of date, the SoundCloud audio itself has been played 826,262 times and has 167 comments. There was another story which got picked up quite a bit. Published in The New Indian Express on 31 December, saying that TCS was handing out pink slips, the story was tweeted 75 times and had 330 likes on Facebook.

TCS had had enough. Whatever FITE was doing, it seemed to be working. The company did try to get to the bottom of it all; one-off calls to members of FITE and an attempt to attend the local chapter meetings of the organization had not yielded anything. A decision was taken to lie low till its fiscal third-quarter results. On 15 January, TCS announced its quarterly earnings at a press conference, where the number of involuntary employee departures was put at 2,574 with only 981 in India.