For Toyota to benefit from the tie-up in India, where it is a fringe player to Maruti Suzuki, the two carmakers will have to figure out how they compete

New Delhi: India could play a key role in making or breaking the proposed research and development partnership between Toyota Motor Corp. and Suzuki Motor Corp. that the two companies announced on Wednesday.

India is the only country in the world where Suzuki dominates Toyota. The latter’s Indian arm, Toyota Kirloskar Motor Pvt. Ltd, has a 4.6% share of the market, while Maruti Suzuki India Ltd holds 47%.

But even in India, where low-cost small cars account for one out of every five cars sold, it is clear that at least some consumers, in large cities to begin with, would prefer hybrids—if not now, in a few years.

Developing low-cost hybrid technology for the growing Indian market will be a crucial element in the proposed partnership between Toyota and Suzuki, according to officials at Suzuki’s Indian unit.

“In India, we want a low-cost hybrid. Japan has high-cost hybrids; so clearly, such technologies can’t be brought here. If my car is priced at Rs6 lakh, then I can’t increase its cost by Rs3 lakh to make it a hybrid. That does not make sense. But, everybody wants higher fuel efficiency and cleaner fuel," a top executive at Maruti Suzuki said, speaking on condition of anonymity. 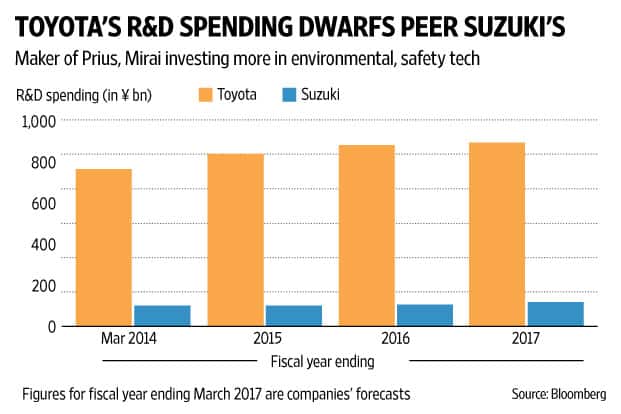 Newer technologies are very expensive. Suzuki is still small in global terms and lacks the capability to invest in such technologies.

However, for this to materialize, and for Toyota to benefit from the alliance in India, the two companies will have to figure out how they compete.

Toyota is a laggard in the small car market. It now owns Daihatsu Motor Co., which plans to enter the Indian market in the next three to four years.

ALSO READ | Toyota, Suzuki in talks for a possible partnership

In Japan and a few South-east Asian markets, Suzuki faces intense competition from the rejuvenated Daihatsu, which makes small cars.

The partnership will be “tricky" without equity participation, some experts said. “Only a meaningful alliance on the lines of Renault-Nissan shareholding structure can deliver benefits that can be harnessed from a partnership of Suzuki and Toyota," according to Vikas Sehgal, global partner at UK-based Rothschild and Sons Ltd.

Maruti Suzuki sells 1.3 million units annually and aims increase that to 2 million by 2020.

“We have to wait for some time and see how this turns out," R.C. Bhargava, chairman of Suzuki’s Indian unit, said of the partnership.