New Delhi: Mercedes-Benz India Pvt. Ltd, which has lost pole position in the domestic luxury car market to BMW India Pvt. Ltd, is making fresh investments into its Chakan plant in Maharashtra to be able to make more of its cars locally and save on taxes.

“We have been in constant talks with our headquarters for ramping up our operations here in India," he said. “A significant investment will happen in the CKD (completely knocked down) category. We would like to do more and more local assembly here. For that, we need to ramp up the capacity." 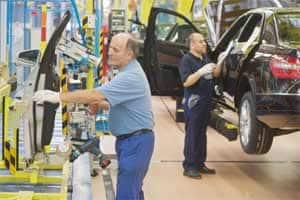 Mitra in October forecast India’s luxury car market to rise 35% to 23,000 units in the fiscal year from 17,000 last year, unaffected by slowing economic growth, higher fuel prices and rising interest rates that have hit the sales of cheaper vehicles.

Mercedes will start selling its S-class sedan with a locally assembled engine after the government raised customs duty on the import of pre-assembled parts from 10% to 30%, Mint reported on 23 September.

Luxury car makers import completely built-up engines for some models and assemble other parts within the country. The engine accounts for at least 15% of a car’s cost.

“A lot will be spent on the new product line-up, manpower, and IT (information technology) and services department," Mitra said. “So all these would require significant investments. Quantum of the investments has not been decided yet."

“We will begin with S-class shortly and will locally manufacture our premium SUV M-class sometime next year," this executive said, requesting anonymity.

Mitra said he would not comment on the M-class.

He said the company has a dominating position in cars priced ₹ 25 lakh or above. BMW, the market leader in India, drives at least 33% of its total sales from its flagship model X1, an entry-level sports utility vehicle with prices beginning at ₹ 22 lakh (ex-showroom, Delhi).

“First-time premium car buyers are willing to pay more and buy a Mercedes car than cars in the bracket of ₹ 20-24 lakh category, which are stripped down versions," he said. “Having said that, we would like to strengthen our product portfolio from top to bottom."

Mitra said while Mercedes’ focus will be entry-level premium cars, it wants to bring more sports cars to India.

“We will be launching SLS-Roadster, which is a notch above the SLS-AMG, during Auto Expo along with the new M-class," he said. “Our entry level cars such as B-class will start driving into India by the end of this year and will be followed by the A-class and GLC (a competitor to the X1)."

The Auto Expo begins in Delhi on Thursday.

Mercedes’ B-class hatchback, earlier scheduled to be introduced in 2013-14, is likely to be priced ₹ 18-25 lakh, said the second Mercedes official cited earlier in the story.

The second-generation version of the hatchback, a right-hand drive that was launched globally in October, will be introduced in India by the end of this year. The five-seater will be the first luxury hatchback to be sold in India and will have aerodynamic features on a par with the E-Class sedan. It will have both petrol and diesel versions.

Mercedes will launch the A-class hatchback in India in 2013 and the right-hand drive version of GLC in early 2014.

Mercedes-Benz India is also in talks with its parent to assemble the hatchback in India to save on taxes.

An auto expert with a consultancy, who did not want to be named, citing Mercedes as a client, said the company has to catch up with the competition.

“Audi’s Q3 (another X1 competitor) will hit the roads soon. This will be a volume car for the company and may redefine its future in the country," said the consultant. “They (Mercedes) are doing right things by locally assembling their models. But they need to give an option to the customers against the likes of X1 and Q3."