Start-up funding declines, but no let up in deals

Start-ups have attracted about $4 billion in investments so far this year, down from $7.55 billion in 2015, but there's been almost no let-up in deal volume

Bengaluru: India’s start-up ecosystem may have seen a fall in funding this year, but there’s been almost no let-up in the number of deals, highlighting that investor appetite is still strong.

Start-ups have attracted roughly $4 billion in funds so far this year, down from a heady $7.55 billion in 2015, which was largely powered by large rounds at Flipkart, Ola, Snapdeal and Paytm, according to data from start-up investment tracker Tracxn.

However, the volume of deals has remained largely flat. So far this year, 996 deals have been completed, compared with 1,027 last year. 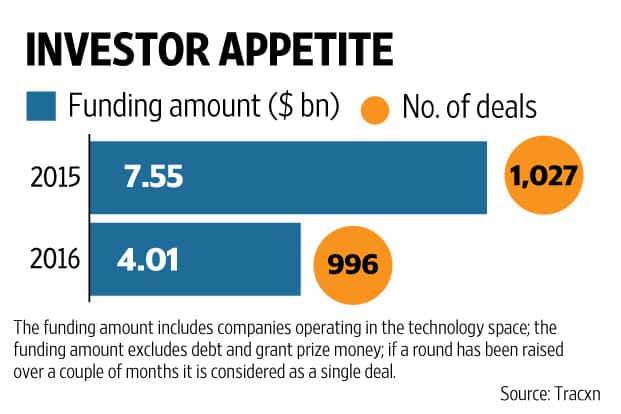 “While we didn’t see the kind of funding we saw in 2015 this year, plenty of start-ups did and are still getting funded. And good companies will continue to get funded. But it will be unrealistic to expect a repeat of 2015, which was a serious year of aberration. All kinds of random companies with random business models were getting funded at random valuations... thankfully, in 2016, that randomness came to an end," said Amit Somani, managing partner at Prime Venture Partners.

ALSO READ | Despite surge, still a long road ahead for start-up M&As in India

If GMV (gross merchandise value)—a vague measure of sales—was last year’s favourite term, this year’s is unit economics (the revenue and cost per unit or user). This trend will continue in 2017, say experts.

It’s become clear that investors overestimated the potential of India’s consumer Internet market and that realization was reflected with every cheque that was signed (or not signed) this year. Many of the start-up stars of 2015—Flipkart, Snapdeal, Ola, Grofers, Oyo and Zomato—went into cost-cutting mode.

Online retail sales actually shrank in the first nine months of the year from levels seen at the end of last year, as Snapdeal and—to a lesser extent—Flipkart cut back sharply on advertising and discounts.

The weakness in the consumer Internet space highlighted an awkward truth: while the number of Internet users is growing rapidly, the number transacting online isn’t increasing at the same rate, raising concerns whether Internet firms can attract en­ough new paying users to back investor’s rosy projections.

Large deals were conspicuously absent in 2016, particularly as Flipkart and Ola struggled to raise funds at their preferred valuations. Snapdeal, another unicorn, had to settle for a relatively small fund-raise of $200 million.

Still, the fact that the volume of early-stage deals continues to be healthy should encourage up-and-coming entrepreneurs in India’s fledgling start-up ecosystem.

E-commerce, digital payments and, in particular, enterprise software or software-as-a-service (SaaS) were among the top sectors this year, while last year’s investor darlings were hyperlocal and e-commerce start-ups.

“The rationalization in valuations and funding that we saw this year was bound to happen. In 2014 and 2015, everybody believed that India would be China in three years’ time—people did a lot of pattern-matching and went ahead and funded lots of companies that did not have stable models. And those bets didn’t come off the way they anticipated," said Bharati Jacob, managing partner at Seedfund.