Home >Companies >How Mark Mobius saw India over the years

How Mark Mobius saw India over the years

Mark Mobius might not have been the best-performing emerging-market fund manager, but his name has been more synonymous with the idea of investing in businesses from developing economies than any other.

So, on 31 January, when the 81-year-old retires from Franklin Templeton Investments after 30 years, it will mark the passing of an era.

In some year or the other, beginning 1995, each of these five countries led the portfolio of Templeton Emerging Market Investment Trust—the best-known Templeton emerging-market investing vehicle that Mobius managed. But never India, despite the unstinting optimism he voiced for the country in public. India was a steady crawl in the Trust’s portfolio: from 0.6% in 1995 to 3.9% in 2005. In 2010, this spiked to 14.5%—an all-time high—and two Indian companies featured in the fund’s overall top 10 holdings.

But in the year when demonetisation happened and the Goods and Services Tax (GST) became imminent, the Trust cut its India exposure to 6.1%, its sixth largest holding in a portfolio worth £2.1 billion. The Trust’s Indian holdings have been mainly in stodgy, old economy, industrial businesses. By contrast, the latest released list of top 10 holdings of the fund—in which there’s no Indian company—consists entirely of consumer and information technology (IT) businesses. 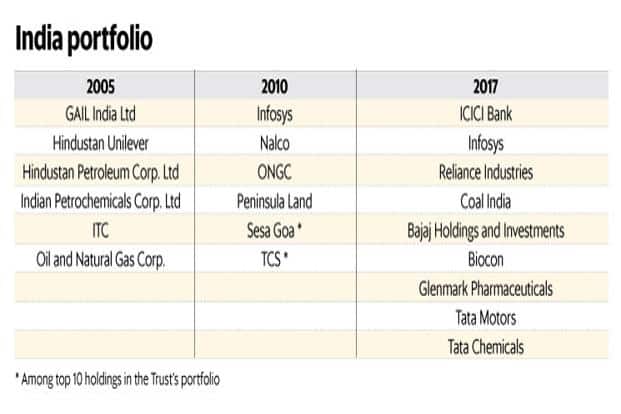